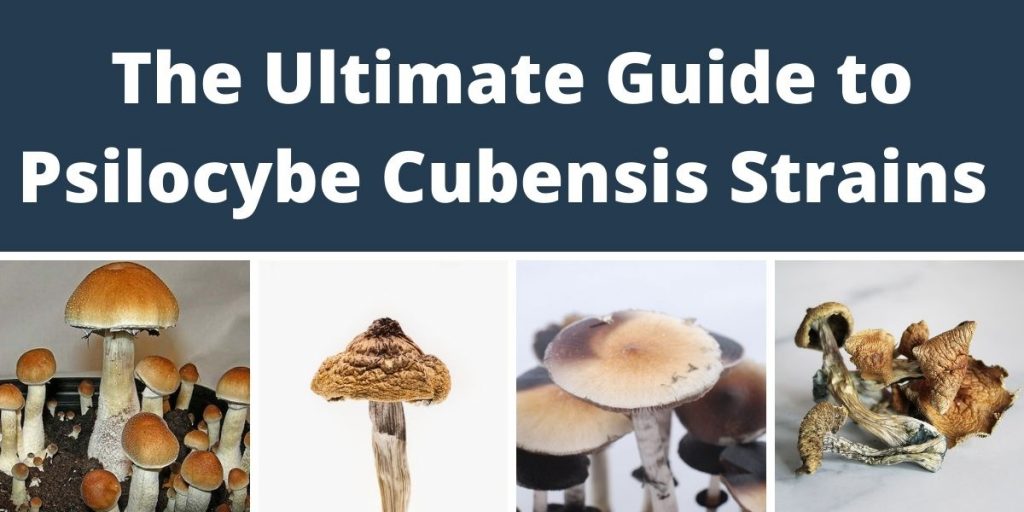 Psilocybe cubensis is the best-known of the Psilocybe mushrooms, a genus of mostly small, dung-loving species that produce the popular hallucinogen, psilocybin. Psilocybe mushrooms are usually microdosed. P. cubensis can be cultivated on many substrates other than dung (though dung remains its favorite), and many varieties have been either discovered in the wild or bred deliberately by growers and are now under cultivation. The varieties, or strains, vary in how well and how fast they grow, what conditions they prefer, their color, size, and shape, and in the quality and intensity of the experience they give to users.

There are a couple of possible points of confusion to keep track of.

One is that because psilocybin (and anything that contains it, including mushrooms) is illegal in most jurisdictions, there is no way to do the research that would determine exactly how these strains differ from each other biochemically. The (largely spurious) claims of different alcoholic beverages producing different effects, such as making drinkers mean verses friendly and so forth, shows that user accounts can sometimes be wrong. It’s possible that just as alcohol is alcohol, psilocybin is psilocybin, period. On the other hand, there could be a whole range of unidentified “active ingredients” in play, causing genuinely differing results. The bottom line here is “your mileage may vary.”

Psilocybin concentration does differ from one mushroom to the next, and it’s likely that each strain does have a distinctive typical potency. However, the difference is likely subtle, and there is a lot of overlap between strains due to individual variation.

Which brings us to the final caveat. Many do not differentiate between strains of P. cubensis and other Psilocybe species, discussing all of them as simply “types of shrooms,” but the difference matters because other species can have dramatically different potency, either much stronger or much weaker than one would expect with P. cubensis. Estimating proper doses can be difficult to impossible without knowing the species of mushroom in question.

With all that being said, here is a brief review of many of the more popular Psilocybe Cubensis strains ranked by their potency, visuals and effects, in order. 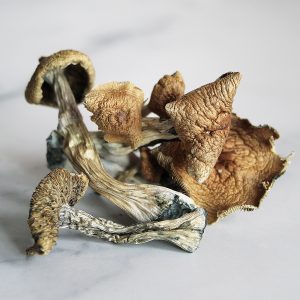 This strain produces an unusually large mushroom with a big, yellowish cap with pale spots. There are multiple stories about their origin, but they are generally thought to have been found in the wild about thirty or forty years ago. They are popular with beginner-growers, since they grow well on many different substrate types and can tolerate marginal conditions and still produce large crops. They do take a little longer to fruit than most varieties.

Golden Teacher is considered average to high potency, although the trips are often relatively short (an advantage for some users). Visuals are less intense than with some strains, but users often report a euphoric and relaxing experience, and sometimes also a sense of mental clarity. 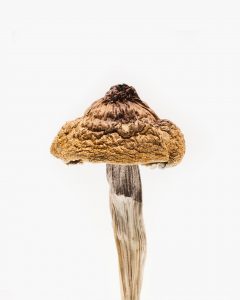 An extremely popular strain thought to have been developed intentionally by a cultivator twenty to thirty years ago—some people suspect it of being a hybrid between P. cubensis and another species, P. azurescens, rather than a pure P. cubensis strain. The fruiting bodies are relatively large, and the spores are quick to germinate. The strain is relatively easy to grow and produces a big first flush but smaller subsequent flushes.

Users report a middle-of-the road experience and a lethargic feeling, but nausea seems less common with B+ than with other strains. 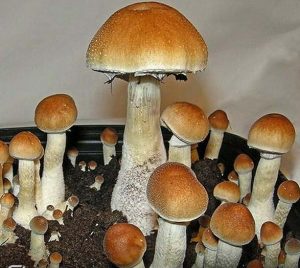 The Z-strain was intentionally developed to maximize both growth and potency. The fruiting bodies are large with unusually long stems. The strain grows fast and fruits heavily multiple times, and is therefore a favorite with commercial growers—that makes it one of the most commonly-available strains as well. 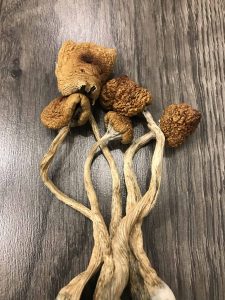 “Blue Meanie” is both the name of a popular P. cubensis strain and a common name for Panaeolus Cyanescens, a different but related species. The two look somewhat similar but not identical, and they have differently-colored spore prints. Perhaps more to the point, Panaeolus Cyanescens is dramatically more potent.

The Blue Meanie strain of P. cubensis has a bluish stem. It’s considered highly potent (for a p. cubensis) with an intensely visual, very long-lasting trip. 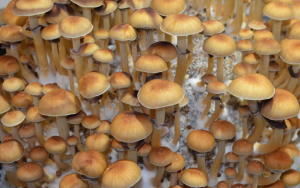 The Cambodian strain was found growing wild in Cambodia near Angkor Wat, hence its name. The fruiting bodies are small, with brown caps with pale spots. It’s a very popular strain with growers, since it grows very fast and fruits quickly, abundantly, and repeatedly. They do need slightly warmer growing conditions than most P. cubensis strains do.

Users report high potency and trips that are not intensely visual but with a lot of energy and a very creative or philosophical mindset. 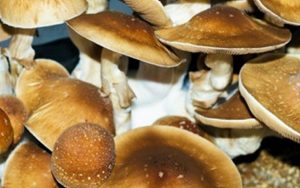 The “PF” is, according to legend, from the nickname of the strain’s developer, Psilocybe Fanaticus, who also invented PF-tek mushroom cultivation. His real name is Robert McPherson. His strain of P. cubensis is known for large, brownish caps that often get lighter in color as they get older. They take a long time to grow and are not a great choice for first-time growers but do flush repeatedly.

Users report a strongly visual experience, especially at higher doses, with a creative and introspective mood. Nausea afterwards is likely, though. 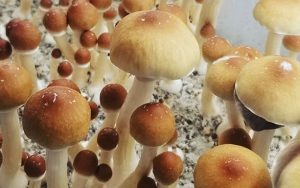 The Alacabenzi strain is, according to legend, a cross between a natural P. cubensis variant found in Alabama and another variety, possibly the species P. mexica. It produces very large fruiting bodies and is considered easy to grow.

Users report that it provides a relatively gentle trip, similar to come cannabis strains, and good for beginners—except it can cause serious problems with physical balance, especially at higher doses. 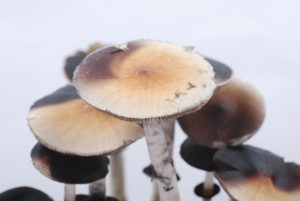 As the name implies, this strain was found growing wild in India. On its favorite substrate, elephant dung, it can produce truly huge fruiting bodies. In cultivation, it is not huge but is still large, the biggest and tallest known P. cubensis strain. The cap is brown at the center but fades to white near the edges. The stem is yellowish. It’s a good strain for beginners who want to grow magic mushrooms, since it resists contamination and tolerates poor conditions fairly well.

Users report that it is extremely potent, with a very relaxing and very visual trip. 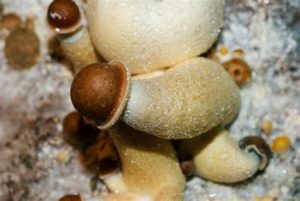 Penis Envy is a little more penile in shape than other strains, thanks to a thicker stem and a smaller, more curved cap, but it is not noticeably more envious. While its discovery is often credited to Terrence MnKenna, he only found and collected the wild progenitor; a cultivator named Stephen Pollock discovered the mutation that would become Penis Envy while working with the material provided by McKenna.

Penis Envy is a very difficult strain to grow. It drops very few spores, those spores do not stay viable very long, and they take substantially longer to germinate than most P. cubensis spores do. Plus, the mycelium is unusually vulnerable to contamination. As a result, very few growers work with Penis Envy, making the variety rare and expensive to buy. Users pay the high prices because this strain is unusually potent.

Besides the potency, the Penis Envy trip is unusual for having a notably fast onset with wavy, rather than geometric, visuals and relatively little effect on the body—the experience feels “clean,” mental and emotional, rather than physical. It is propagated and used both in pure form and as one of the parents in a number of different popular hybrid strains.

Mushroom Field Guides cost upwards of $50. We're giving you a one time offer to get one free of charge. All you have to do is sign up with your email.

Not only will get you a free field guide but you will get exclusive access to ground breaking studies, and discounts.