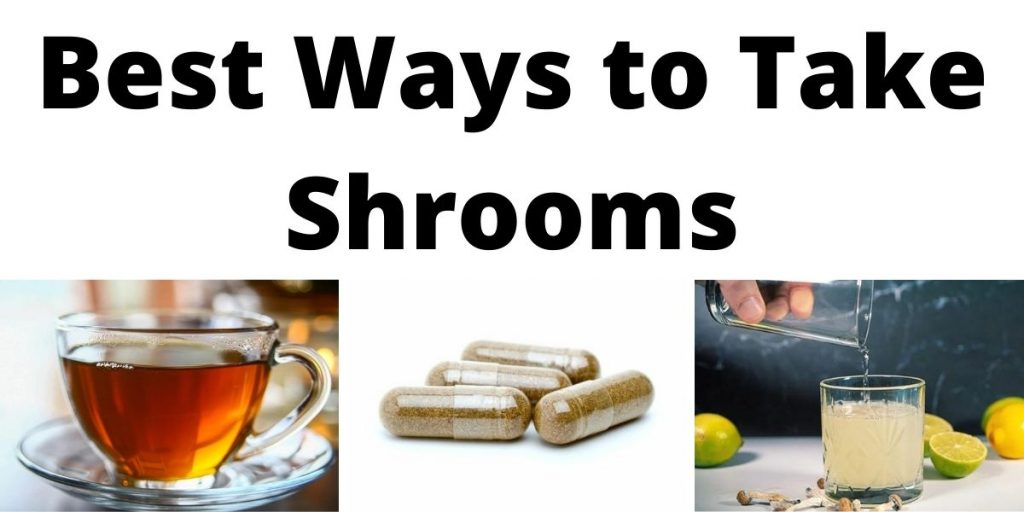 So, you’ve heard of shrooms. Maybe you’ve tried them and liked them, but you know there are various ways to take them, and you don’t know which is best—and you don’t know anyone you can ask. Well, we’ve compiled a couple of helpful pointers[i]. Before we get started, though, we have to remind you that using or even just knowingly possessing shrooms is illegal in most jurisdictions. Please don’t go to prison,  we hate losing our readers!

First, some basic information before we get into the different ways to take shrooms.

Shrooms are psychoactive mushrooms. You probably knew that part already, but there are some important details to keep in mind.

Specifically, what people usually call a “shroom” is usually a strain of Psilocybe cubensis a small, typically brownish, mushroom that, in the wild, feeds on horse and cattle dung. It’s very wide-spread, growing everywhere that horses and cattle poop, provided the weather isn’t too cold. The species is also relatively easy to grow indoors (usually on grain), and so it is widely cultivated. There are many distinct cultivated strains with imaginative names like PF Classic, Golden Teacher, and Albino Penis Envy. The species owes its “magic” primarily to psilocybin, a naturally-occurring psychoactive (and mostly illegal) substance that is suspected of also having medicinal potential.

There are other psychoactive species in the Psilocybe genus. Almost wherever you live, there is probably  at least one native to your area, though many are much less potent than P. cubensis. Some are more potent. All could be referred to as shrooms, though it’s worth keeping in mind that they are different species.

There are also other genera of psilocybin-containing mushroom that can be used in similar ways, though  potency can vary widely, as can the flavor and quality of the high. These could be called shrooms, too, in a pinch, although again, it’s important to recognize that these are different mushrooms. You must learn a lot about a species before popping it in your mouth.

An important note for people who wild-forage shrooms or who eat shrooms other people have wild-foraged; these species have a number of close look-alikes, some of which are dangerously toxic. People have died by eating what they thought were shrooms and weren’t. Differentiating among the many little brown mushroom species is one of the trickier puzzles in the mushroom world. Never eat a wild shroom unless the person who picked it was a real expert.

What Isn’t a Shroom

Not all psychoactive mushrooms contain psilocybin. Amanita muscaria (the one with a red cap with white patches) and some of its relatives are psychoactive, for example, but their biochemistry is very different. That means the high the produce is qualitatively very different from that of the Psilocybes, plus their use is not as safe.

Psilocybin is not risk-free. It’s possible to over-dose, and dangerous reactions at moderate doses are not unheard of. Children (who sometimes consume shrooms by accident) are especially at risk. But basically it’s a safe substance that becomes unsafe when used the wrong way. In contrast, the psychoactive Amanitas contain substances that are basically toxic but that can be rendered safe enough to use if processed properly (there are also mushrooms in the same genus that are deadly poisonous). There are people who use the psychoactive Amanitas, but they are a whole different ball-game from the more popular, psilocybin-containing, shrooms.

What Do Shrooms Do?

So, what is taking shrooms like? It depends on how much you take.

People who have never taken shrooms often describe them as hallucinogenic mushrooms, as though making you see stuff were the primary thing psilocybin does. It’s not. At very small doses, psilocybin isn’t even hallucinogenic. Even at moderate doses, the hallucinations tend to be subtle—colors brighten, walls may appear to breathe, the world may look geometric, cartoon-like, or gelatinous. Only at the higher doses do the visions compete seriously with reality, and by then hallucinating is likely to be the least of your issues.

Psilocybin primarily influences both mood and thinking-pattern. The altered thinking can lead to important personal and spiritual insight, though people wishing to use shrooms as a tool for personal growth must do a lot of work to understand and integrate those insights after the trip, or they won’t learn much. Shrooms are not a short-cut to wisdom. As for mood, although psilocybin has been called mood-altering, mood-enhancing might be a better term—shrooms are said to make more extreme whatever is going on for the user anyway. So, if you take some shrooms while relaxed and happy, you’ll likely end up feeling euphoric and deeply connected to everybody and everything around you. But if you take some shrooms while nervous and stressed, you could end up in a temporary personal hell of terror.  That the trip itself can be scary for inexperienced users—and possibly trigger the kind of fear psilocybin can exaggerate—is one reason to never take too much and never trip alone.

Note, though, that for people looking for growth rather than entertainment, an emotionally difficult high could be as useful as an enjoyable one. The important thing is to respect the mushroom, and to respect the fact that it can do some serious work on the mind.

Psilocybin also has effects besides the purely mental. Some of these are enjoyable, others are not. Users will likely have some nausea and may feel either drowsy or unusually energetic. Problems with balance or coordination are common and can be severe at high doses. Very rarely, convulsions or worse can occur. Overdoses can be fatal, but that is extremely rare.

The effects usually take about a half-hour to appear and last four to eight hours, though much longer trips are possible. It’s best not to trip too frequently. The body needs time to re-set.

Articles like this one usually recommend a certain dose, usually weighed out in grams. The problem is that the potency of shrooms (even shrooms of the same strain) can very a lot, as can the sensitivity of users. The best thing to do is to research the particular species and strain you want to use, find out what the standard dose guidelines are, and then take less than you think you want. See what happens. Once you learn what your personal sensitivity is, you’ll be better able to judge your own dose size.

Do remember that dose size is very different depending on whether the mushrooms are fresh or dried. I always recommend you microdose if it’s your first time taking shrooms.

The most straight-forward way to consume shrooms is to simply pop them in your mouth, chew, and swallow. The advantage is eating them that way is super-easy. The disadvantage is that many people dislike the taste. Avoiding or changing the taste is the whole reason for most of the other ways of taking shrooms. 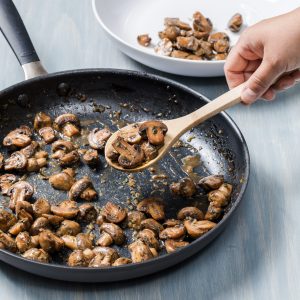 First of all, don’t actually cook shrooms—the psilocybin degrades above 190° F., well below the temperature at which cooking occurs. Instead, what you’ll be doing is powdering dried shrooms (use a weed grinder or a coffee grinder) and then mixing the powder in with something you’ve already cooked, something with a strong and enjoyable taste. Pesto is a good option, as is melted chocolate (then you pour the chocolate into molds to let it solidify), or a strongly-flavored cheese sauce. Powerful flavors are important, because if the food can’t overpower the taste of the mushroom, then what is the point?

The advantage here is that you get to enjoy eating the shrooms, rather than just enjoying the trip. But mixing shrooms into food can cause dosing problems. For example, say you and three buddies want to trip together, so you mix three doses of shrooms into enough pesto for three people—and somehow the shroom powder ends up unevenly distributed so that one of you gets two doses and another gets none. Or suppose one of your friends eats a little less, so there’s extra, and you really like pesto, so you eat that, too….Overdoses can happen that way. And the effects won’t start to come on until after the meal is done, so you won’t get any direct feedback on how much you’ve had until after it’s too late to do anything about it.

Plus, psilocybin often causes nausea. If you eat too much right before your trip, you could end up puking, which is not exactly pleasant. 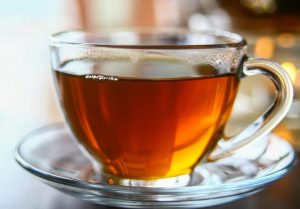 Making shroom tea involves mixing shroom powder into hot (not too hot!) water and letting it steep for  at least ten minutes. Strain out any chunks that escaped the grinder, but otherwise you’ll be drinking the powder along with the tea. The primary advantage here is that drinking shrooms as tea is said to make the effects come on faster, while reducing the chance of nausea. But you can add other ingredients to your tea to improve the taste, too. Ginger is a good choice, since it’s not only strongly-flavored, but also good at reducing nausea.

Measure out your dose before you add it to the tea, as measuring doses of tea can become complicated and difficult. 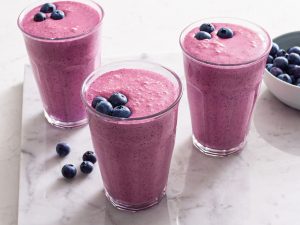 Making a smoothie is midway between food and tea. A basic smoothie is frozen fruit and fruit juice whizzed in a blender together—milk or yogurt is optional. Again, a strong flavor is important if you don’t like the taste of the mushrooms. Adding powdered ginger is a good idea, both to mask the mushrooms and because it pairs well with most kinds of fruit. Fresh ginger-root is not ideal, as a few chunks will likely make it through the blender intact, and biting down unexpectedly on a chunk of fresh, raw ginger is not pleasant.

Again, measure the mushroom dose first before adding it to the smoothie, then drink the whole smoothie. 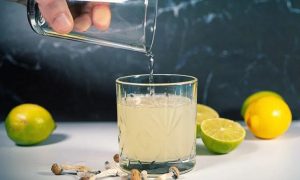 Lemon Tek (short of “lemon technique”) is basically shroom tea with lemon or lime juice instead of hot water. The idea is that the acid in the juice begins to pre-digest the mushroom, meaning that once you drink the shroom-and-lemon mixture, the effects will be stronger and come on faster. Of course that means your dose estimates will be off. You’ll need less to get the same results, and it might be hard to estimate how much less you’ll need. Err on the side of taking too little, rather than too much, until you know how the mixture effects you.

The other caution here is that not a lot of people want to drink a lot of straight lemon juice. 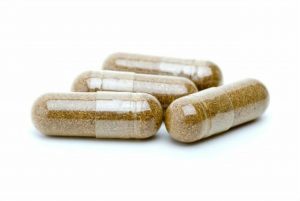 You can buy empty capsules, the kind they make pills out of, and a capsule machine to put them together. Then you can use shroom powder to make your own shroom pills. Making shroom capsules is a good way to entirely avoid tasting the mushrooms, plus if you want to go trip someplace other than your own home, capsules are a discrete way of carrying your material—you could even put them in an old pill bottle.

Keep an eye on those capsules, though. You wouldn’t want anyone to take them thinking they are vitamins or something. 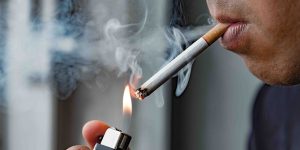 Do not smoke shrooms. It might actually be dangerous and remember how we said heat degrades psilocybin? ‘Nuff said.