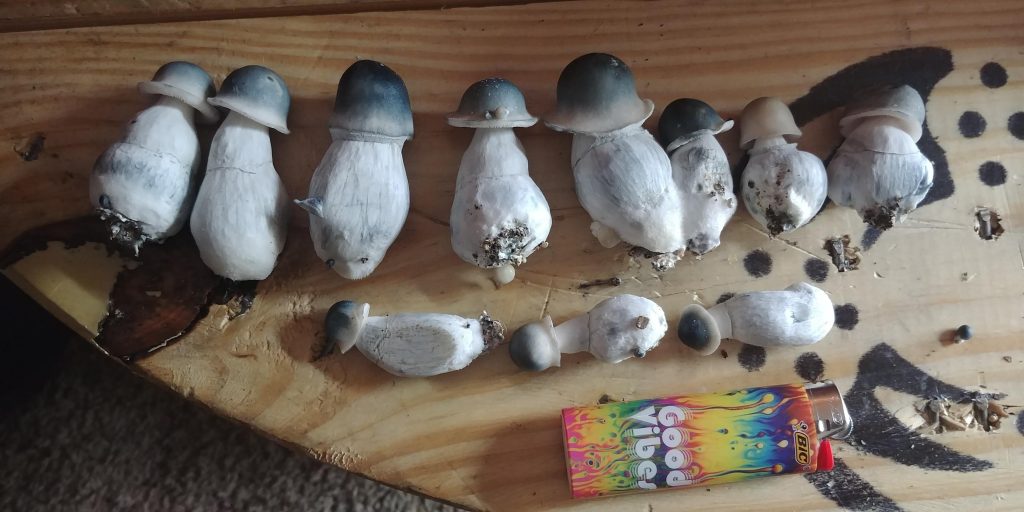 Albino Penis Envy, or “APE,” for short, is a cultivated variety of Psilicybe cubensis, one of the best-known and popular “magic” mushrooms that are microdosed. As the name implies, the fruiting bodies do look rather penile, but the same can be said of many mushroom species. They are not especially envious.

APE is a pale-capped sub-variety[i] of Penis Envy, reputedly one of the most powerful varieties of P. cubensis—and rumored to have been discovered in South America by well-known author, Terrence McKenna[ii]. It can be difficult to grow, and is therefore rare, but ape is popular among those entheogen users who can get it.

About P. cubensis, the Parent of the APE

Understanding APE begins with understanding P. cubensis, the wild fungus it grew out of—in fact, APE still is P. cubensis, rather like how the white tigers bred for circuses and zoos are still tigers, not a new species.

P.cubensis[iii] is a small, often long-stemmed mushroom with a bluish ring that is often stained black by falling spores. The stem and cap both bruise blue. Wild-type caps are brownish, but APE caps are almost white. The species eats, and usually fruits from, the dung of large grazing animals—not from under dung (a habit other species have). The wild type grows freely in well-watered tropical and sub-tropical areas of almost every continent. Several look-alikes do share the same habitat, so it’s unwise for enthusiasts to go foraging on their own unless they have also developed some skill at mushroom identification.

It’s important to remember that noticing certain kinds of details is a learned skill. The brain discards details deemed unimportant, so until a person has studied mushrooms in an ongoing way for some time (thus teaching the brain that mushroom details are important) the difference between a useful species and its toxic look-alike might literally be invisible. Expertise is important.

Many users either buy or grow their supply, making identification less of an issue.

P.cubensis is mind-altering, able to cause a range of effects[iv], including hallucinations, mood-changes, new beliefs or ideas (sometimes classifiable as delusion, sometimes not), and anxiety, or even panic. There can also be less psychedelic effects, such as nausea or worse. The results of taking this mushroom can vary dramatically[v], depending on the chemistry of the individual mushroom and on the physical sensitivity, mental state, and surroundings of the user at the time. Over-doses are possible and can be dangerous, but are never deadly[vi]. The risk of addiction is very low; mushroom use does not cause the kind of dependency that, for example, opiates do. While P. cubensis use is not risk-free, risk can be minimized through reasonable caution.

While some people talk about all “magic” mushrooms as though they were interchangeable, each species has its own mix of psychoactive and other substances, and thus its own possible effects on the body and brain. Amanita muscaria, for example, probably the most famous hallucinogenic mushroom besides P. cubensis, owes its effects to a completely different group of “active ingredients,” and thus works very differently in the body[vii].

P.cubensis has a long history of both religious and recreational use. It may have medicinal value in treating certain psychiatric conditions (though all use, including for medicinal purposes, is still illegal in most jurisdictions). The species is not difficult to grow, and many cultivated varieties are available.

P.cubensis in general is not especially difficult to grow, but APE is an exception. Part of the difficulty is that it rarely releases fertile spores, so other methods of propagation are usually necessary. It’s also particular about its food, often doing poorly on popular substrates, like cakes[viii]. Even when everything goes right, APE takes a long time to grow, and flushes tend to be small[ix]. It’s considered a novelty variety, something people growing to sell aren’t necessarily going to bother with, and nothing a beginner should tackle. Instead, APE is a great variety for experienced growers who want a challenge and look forward to a few very potent shrooms at the end of the process.

An advantage of APE is that it’s a sturdy fungus, able to tolerate conditions (such as excessive heat, as when a heater malfunctions) that would kill almost any other kind of crop; poor growing conditions or residue from cleaning products can cause malformed fruiting bodies, but there is a crop[x]. All this is not to say that careful attention to temperature and humidity and other details is unimportant—APE will do better if it is well-cared-for.

APE, like other hallucinogenic mushroom species, is illegal to grow or possess in many places. “Possession” includes growing the mushrooms. And yet, in many jurisdictions, possessing the spores is perfectly legal because it is the hallucinogenic substances, not the fungus that produces them, that the law concerns itself with. The mushroom contains the prohibited substances, so the mushroom is just as illegal as a vial of liquid psilocybin would be. But the spores can’t make a person trip—they don’t contain  any of the active ingredients, so the law doesn’t care (again, there are exceptions). That’s why it’s legal to sell, even advertise, growing kits that, if used as directed, will place the user in serious legal jeopardy.

Before growing or using APE, or any other hallucinogenic mushroom, it’s important to learn what applicable law is in your area. Some people choose to break the law for any number of reasons, but getting arrested accidentally through ignorance would be unfortunate in the extreme.

Penis Envy-type variants are popularly considered the most powerful strains of P. cubensis, and APE is considered the most powerful of the Penis Envy variants[xi].  Its effects have been described in glowing terms as being very visual with a lot of euphoria and deep thoughts. However, P. cubensis in general is highly variable in its potency, and the effect of eating the mushrooms can vary, too, depending on both set and setting (the mindset and the surroundings of the user at the time). The bottom line is that mushroom variety is not always a reliable predictor of the quality of the experience[xii].

APE can be consumed raw,  cooked, or in a tea, among other methods. Reportedly, it tastes a little bitter—not bad, exactly, but it would not likely be popular fare if it were not hallucinogenic[xiii]. Once a person ingests it, however they ingest it, the effects[xiv] might come on in anywhere from twenty to forty minutes, sometimes a little more—a delay that can make proper dosing a little tricky. The “trip” can last for up to six hours, though duration, too, is variable. “Flashbacks,” in which the effects suddenly reassert themselves long after the mushrooms have left the user’s system, are possible, and are either an advantage or a disadvantage, depending on one’s point of view.

The full set of possible mental effects is long, but not everybody experiences all of them—indeed, many people have a great time, as can be expected of a fussy mushroom variety that many people do their best to grow anyway. Effects include: a distorted sense of reality; visual or auditory hallucinations (or both); euphoria; spiritual experiences; nervousness; paranoia; panic.

The distinction between “mental” and “physical” experiences is fuzzy at best and there are both medical and philosophical reasons to doubt whether the distinction even exists, but the terminology remains a useful shorthand because everybody knows what it means. The physical effects, then, of taking APE, include: widened pupils; elevated heart rate, blood pressure, and body temperature; drowsiness; headaches; weakness or poor coordination (or both); nausea; and (very rarely) convulsions. Again, not everybody has all of the symptoms. “Trip reports” often don’t mention physical unpleasantness at all.

Some people use P. cubensis (not specifically APE, but APE is likely included) to treat a variety of mental health issues, including depression, anxiety, and addiction. Anecdotally, the mushroom seems to help when other treatments don’t. Anecdote can be misleading, but there is some scientific evidence that these treatments may work. The legal status of psilocybin and its chemical relatives makes researching and developing P. cubensis-based treatments difficult in the extreme.

We don’t have a specific dosage recommendation for APE Shrooms but, if you want to try and find a dose that works for you, check out our general magic mushroom dosage guide. You can also try out our magic mushroom dosage calculator where you can choose between six dosage levels, including microdose and heroic dose.

Popular methods of consumption for APE Shrooms include Lemon Tek and Shroom Tea.

The most obvious, and perhaps most serious, danger of taking APE, or even growing magic mushrooms, is that it’s potentially illegal in your jurisdiction. There are ways to minimize the other risks, but the legal danger can be quite serious. Many people consider the experience worth the risk, but it’s not a decision to be taken lightly.

There are also other possible problems, some of which are very rare, but the risk is not zero.

With wild P. cubensis, there is the danger of misidentification, as the species has several toxic look-alikes (as well as merely inactive look-alikes). That’s less of a problem with cultivated APE, but since the trade in illegal mushrooms is obviously not regulated, it’s not uncommon for batches to be contaminated—or even for batches to contain NONE of the species the user intended to buy. It’s important to vet your source carefully.

Much has been made of the danger of “tripping” triggering long-term psychosis. The fact that P. cubensis has the potential to treat some mental illnesses should indicate that psychosis is unlikely—that doesn’t mean it’s impossible, though. A more common risk is that a user might have or cause accidents while under the influence; it shouldn’t need to be said, but don’t drive while hallucinating. It might also be a good idea not to cook or go for a long walk in the woods alone, or any other activity that requires skill and attention to be done safely.

In general, it’s best to have a sober companion while “tripping,” someone who can take care of practical details, handle emergencies, and provide support in case the user becomes frightened. Medically speaking, this species it fairly safe. Even a massive over-dose will not kill unless the user has a serious allergy. But bad results are possible, including convulsions or psychiatric emergencies.

The very fact that APE can trigger philosophical insights and spiritual experiences means that it should not be approached lightly, without thought. What makes the mushroom risky also makes it valuable.