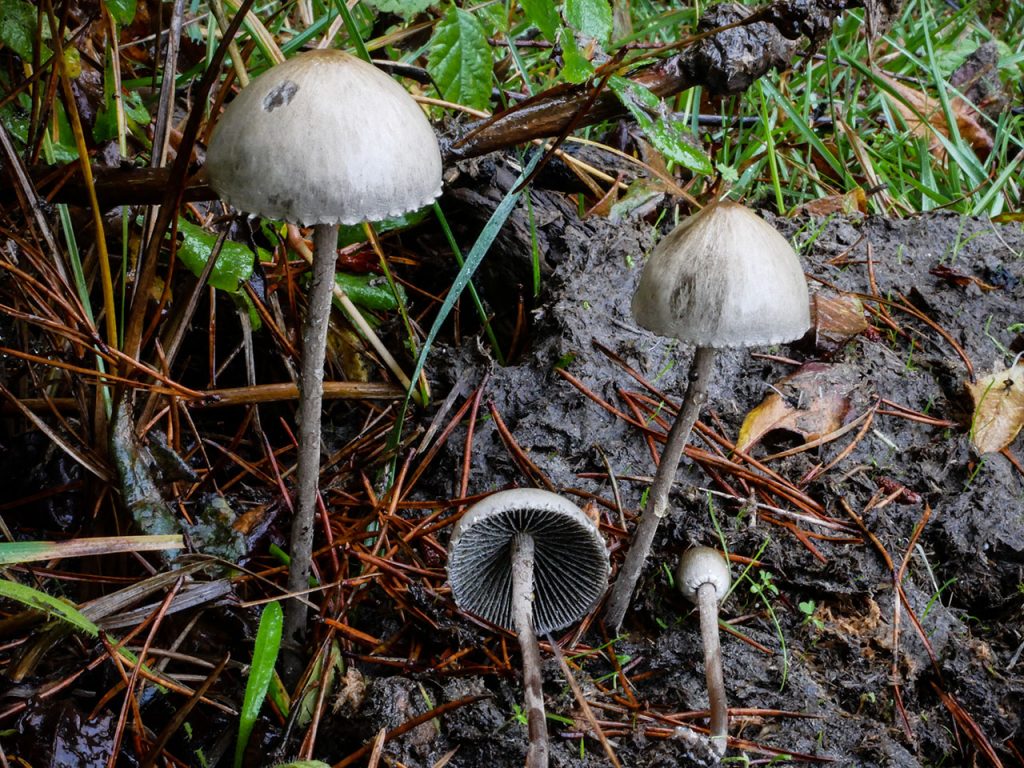 Panaeolus papilionaceus[i], more commonly known as the petticoat mottlegill (for its mottled gills and ruffled edge), is a little, brownish, dung-loving mushroom that’s probably not the one you’re looking for. Despite occasional rumors to the contrary, this one is not “magic.” It is pretty, in its modest way, and it is common across both Europe and North America. It may or may not be edible.

Most mushrooms become the center of taxonomic confusion when they are split up into multiple species, but P. papilionaceus has the opposite problem; it’s been lumped together with several forms that were once considered distinct. Thus, P. campanulatus, P. retirungis, and P. sphinctrinus are all just P. papilionaceus by other names[ii]. “Sphinctrinus” is not a reference to animal anatomy, by the way; the word means “tightly bound” and refers to the fact that these mushroom caps don’t open up very widely.

Cap: Small. May be spherical initially, but expands into a bell shape (not a flat parasol shape). The upper surface starts out smooth but often becomes hairy or cracked in maturity. Can be whitish, grayish, brownish, or reddish-brown. A distinctive feature is the white fragments of tissue around the edge, suggesting saw teeth or the ruffles on the edge of a skirt.
Gills: Usually attached to the stem, but may pull away with age. Gray in young specimens, then developing black mottling, a very distinctive feature.
Stem: Proportionately long and thin, colored more or less like the cap but may be darker or redder at the base if the specimen is old or has been handled.
Smell: Nothing useful for identification.
Taste: Nothing useful for identification.
Spores: Smooth, elliptical.
Spore color: Black, or nearly so.
Edibility: Unknown.
Habitat: Eats the dung of horses and cows—but not fresh dung. This fungus is a late colonizer, so by the time the fruiting bodies appear, the dung piles may be well-broken-down and even covered by grass. Fruits alone or in groups.

The fragments of tissue along the edge of the cap are remnants of a partial veil. That is, when the mushroom first develops, there is a protective sheet covering the gills that then tears as the cap expands, leaving remnants on the edge of the cap. These white remnants, which suggest either tiny teeth or the frills on the bottom of a skirt, together with the mottled gray and black gills, make excellent field marks for the species[iii].

LBMs are not all closely related to each other, but are instead scattered across several genera. A list of distinctive characteristics, including the mottled gills, can be used to confirm that a mushroom is a member of either Panaeolus or Psathyrella, but after that even experts recommend the rather clunky technique of looking up Panaeolus species (there are 30 of them worldwide) and hoping to get a match, because if it isn’t one of them it’s a Psathyrella, and there’s over 400 of those![iv].

All of which is not to say that these species look exactly alike. Far from it. It’s just that differences are often subtle. Confusion is possible and, once it sets in, is difficult to dispel.

There are at least two hallucinatory mushrooms in the genus, P. cyanescens and P. cinctulus, but the former is pale and bluish, and it bruises blue or blue-green[v]. The latter’s cap opens flat, or nearly so, at maturity[vi]. Only wishful thinking is likely to mix them up with P. papilionaceus. Two much closer look-alikes are the dung roundhead (Stropharia semiglobata)[vii], which has brown, not black, spores, and the turf mottlegill (P. firmicola)[viii], which is generally darker, especially when wet. Neither has the frilly veil remnants of P. papilionaceus.

The Deadly Galerina (Galerina marginata) is a fellow LBM, and as the name implies, deadly if eaten, but it is not a close look-alike and grows on wood, not dung[ix].

P. papilionaceus has no known medicinal benefits and is not psychoactive. It may be edible—it is not known to be poisonous. However, its small size and the fact that it grows on dung tend to discourage experimentation.

P. papilionaceus is not used medicinally, so it has no dosage.

Although P. papilionaceus is not known to be toxic, that doesn’t mean it isn’t. The other risk is that of misidentification, especially with one of the hallucinogenic LBM; while many people use hallucinogens quite happily, an unexpected “trip” could be extremely unpleasant and even dangerous. To taste such a tiny, insubstantial mushroom seems not worth either risk.