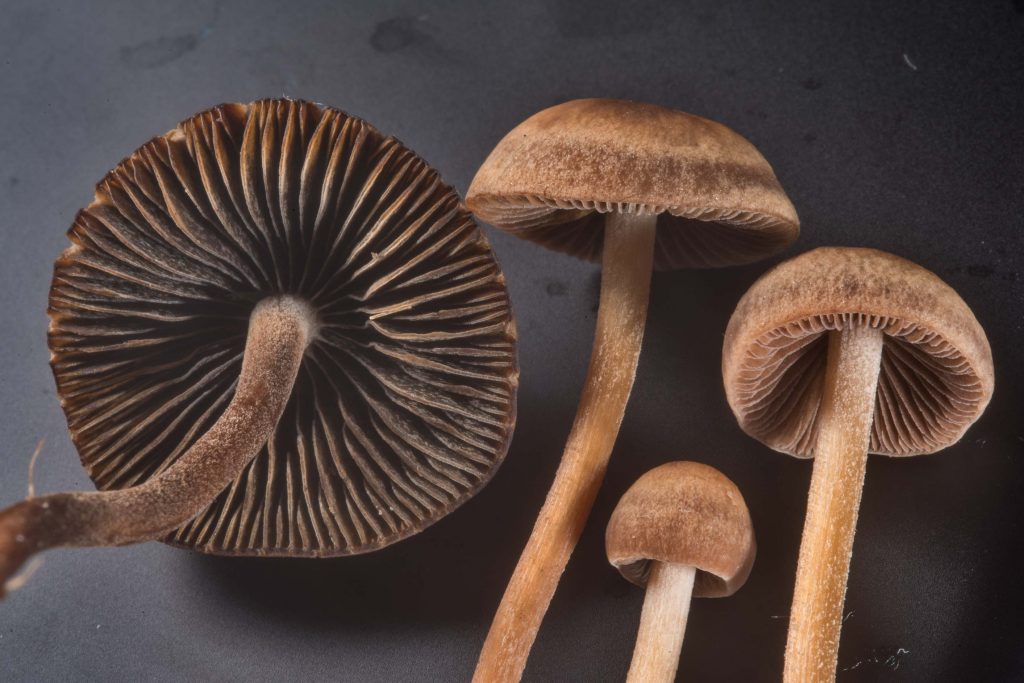 Mushrooms in the Panaeolus genus are called Mottlegills because their spores develop unevenly, producing dark spotting and mottling on the gills. The “banded” part of this species’ name refers to the way the outer part of the cap is usually (not always) darker than the middle. But the people who use this species[i] for its psychoactive properties don’t usually call it The Banded Mottlegill. Most just use its scientific name, Panaeolus cinctulus.

Farmers of the popular white button mushrooms have used another name for it—the weed Panaeolus. So fond is this species of horse dung that it often appears as a contaminant in the cultivation of other dung-loving species. One can imagine the annoyance of the farmers as they pick out the unsalable weeds from among the crop—an ironic association, given that P. cinctulus has become a valuable (albeit illegal) crop in its own right, thanks to its status as a magic mushroom.

Please note that use or possession of psilocybin is against Federal law in the United States and is also illegal in many other countries. Some state or local jurisdictions either allow personal use or at least decline to enforce the laws against personal use, but the Federal law is still in force. The laws are written in such a way as to treat any mushroom that naturally produces psilocybiin, including P. cinctulus, as a container of the illegal drug, and therefore illegal to posses just as a jar of pure psilocybin would be.

Do not use any information in this article to go to prison. That would be a bad trip.

The species is especially fond of horse dung and appears almost wherever horses do, having spread around the world.

P.cinctulus is a “little brown mushroom” or LBM, a member of a large group of mostly unrelated non-descript species that are very easy to mix up. Most other psilocybin-containing mushrooms are LBMs, as are some culinary species, such as Enokitake and some honey mushrooms (like Armillaria Mellea). But so are some poisonous species, including the Deadly Galerina (Galerina marginata). Although careful attention to identification details and habitat will exclude virtually all of these look-alikes fairly quickly, the danger is that someone might not pay attention.

The known benefits of P. cinctulus all stem from the fact that it contains psilocybin, a powerful and relatively safe psychoactive substance. That is, while psilocybin use does have its risks (see note on Toxicity), dangerous reactions are rare. Overdoses are rarely if ever fatal.

Many personal, spiritual, and medicinal benefits are claimed for psilocybin, and some preliminary research suggests at least some of the claims may be correct. Unfortunately, research has been hampered by the laws against psilocybin use. So far, we can’t really be sure of anything except that some people enjoy the result of eating these mushrooms.

Health claims include everything from help with migraines to alleviating treatment-resistant depression.

In general, psilocybin typically causes euphoria, altered thought-patterns that can include new insights, and, especially at higher doses, hallucinations—as well as some less-pleasant effects, such as nausea and excessive yawning. The most common serious unpleasant effect is anxiety, although many people find that psilocybin use actually alleviates anxiety. Much depends on the setting and on the user’s mindset going into the experience. Microdosing P.cinctulus may feel similar to a cannabis high.

P.cinctulus specifically is often said to give a happier trip than the more familiar (to many) Psilocybe cubensis, thanks to a slightly different chemical profile, although there are very few published trip reports for this species[ii].

P.cinctulus is generally said to be either similar to Psilocybe cubensis or somewhat weaker, meaning somebody used to “cubes” would want a similar or larger dose to achieve the same results. However, potency can vary from specimen to specimen, plus human sensitivity also varies.

The proper dose to take depends on what sort of experience the user wants—a microdose that brings a little relaxation and insight without interfering with normal daily activities, or an intensely mind-blowing trip to the stars, or anything in between. But while people sometimes publish dosage recommendations, both mushroom potency and human sensitivity can very so much that results are really hard to predict. Because unpleasant side-effects become more likely at higher doses, it’s always better to err on the side of taking too little rather than taking too much.

Popular methods of consumption for Panaeolus cinctulus include Lemon Tek and Shroom Tea.

While mistaking the Deadly Galerina for P. cinctulus is unlikely (the two do not share a habitat) it is possible, and the possibility is undoubtedly the most potentially dangerous thing about eating P. cinctulus. Other cases of mistaken identity could also cause problems, and running afoul of the law could be very serious.

From eating P. cinctulus itself, the most-likely serious problem is anxiety, which does not occur on most trips but can happen and can be intense. Having a trip buddy—a sober person on hand to help—can be a valuable source of sanity and comfort should a trip turn bad. Trip buddies are useful too for taking care of practical matters that are difficult to attend to when not sober.

Even more serious problems, such convulsions or permanent psychological harm are possible, but very rare.