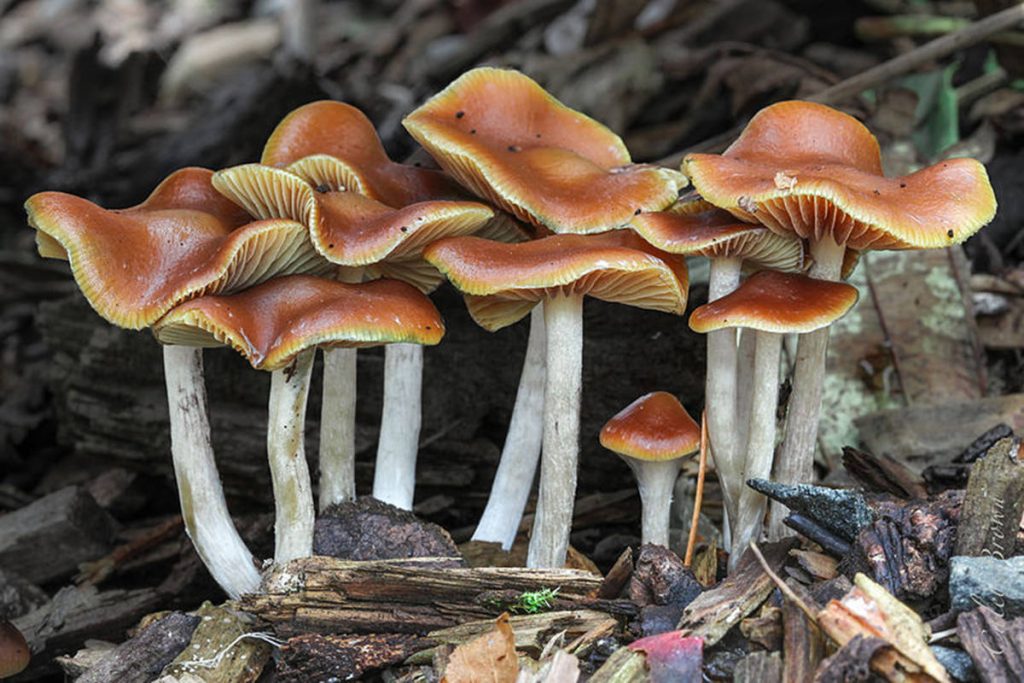 The wavy-cap’s scientific name, Psilocybe cyanescens[i], is a potential source of confusion.  Although every two-part scientific name is unique, the second part, the species epithet, can apply to multiple unrelated species. It’s a bit like a first name that way; while relatively few people share the same full name—say, John Rawlings—some first names belong to lots of people. There are lots of people named John who have nothing to do with each other. “Cyanescens” means “becoming blue,” and it is the species epithet for both the wavy-cap, Psilocybe cyanescens, and The Blue Meanie, Panaeolus cyanescens. Both do become blue if bruised. Both are also psychoactive, but they are very different species.

But it gets worse.

“Blue meanie” is not just the common name of Panaeolus cyanescens, it’s also the name of a certain cultivated variety of Psilocybe cubensis, grown and sold for its psychoactive properties[ii].

So, Blue Meanie (Panaeolus cyanescens), Wavy-Cap (Psilocybe cyanescens), and Psilocybe cubensis “Blue Meanie” are all distinctly different species, and while all do contain psilocybin, their potency varies dramatically so dosing is different.

Cap: Small to medium-sized, becoming almost flat with age except for the usually wavy margins. Brown when young, becoming yellowish or buff with age. Bruises blue. Thin. Smooth, sticky when wet, older specimens are brittle.
Gills: Brownish when young, becoming darker with age. Edges are pale.  In very young specimens, the gills are covered by a webby sheet of tissue called a veil. This tears off as the cap expands.
Stem: Longish, thin, sometimes thicker at the base, smooth, white, bruises blue. After the veil tears, its remnants form a subtle ring zone on the stem.
Spores: Elliptical and smooth.
Spore color: Purple-gray to purple-brown.
Edibility: Psychoactive
Habitat: Eats and fruits from woody debris, leaf litter, and wood chips such as those used in landscaping. Sometimes fruits in clumps.
Range: In North America, most common in California, Oregon, Washington, and British Columbia, though sometimes present in the east as well[iii]. Common in Europe, though probably not native there[iv].

The wavy-margined cap is a distinctive feature, as is the mushroom’s ability to stain blue. If gathering for consumption, it’s critical to check the spore print color, since this species shares its habitat with its aptly-named look-alike, The Deadly Galerina (Galerina marginata). The latter has reddish-brown spores, rather than purple-brown.

Wavy-cap is a “LBM,” or little brown mushroom, a large group of mostly-unrelated species that are very difficult to tell apart without careful attention to the right details. The group includes most psychoactive species, a number of interesting culinary species, and a few toxic, even deadly-toxic species.

The closest look-alikes to wavy-cap are its fellow Psilocybes[v]. These either do not share the same habitat or lack the distinctive wavy margin that most wavy-caps develop. Most also have other, more subtle differences, especially in older specimens. Younger examples of all of these species may look very much alike, though. While these are all relatively safe psychoactive species, it is important to know which is which because potency varies—sometimes dramatically.

Psychoactive species in several other genera, such as Panaeolus, are also fairly close look-alikes, but can be differentiated with close attention to detail.

Culinary mushrooms are those people eat just for the taste. Several species of honey mushroom (Like Armillaria Mellea) and Enokitake (Flammulina velutipes) are well-known edibles in the LBM group. Fortunately for those who want mushrooms that do more than taste good, these have white spore-prints[vi].

The worst possible mistake would be to accidentally eat a Deadly Galerina (Galerina marginata) or one of the other LBMs that contain the same toxin[vii]. People who do usually die, though prompt medical attention does save some. There are doubtless LBMs that are toxic but not deadly as well.

Deadly Galerina[viii] does not have the characteristic waves of the wavy-cap, but it is the same color—the base of the stem is black, not blue, but it’s easy for wishful thinking on the part of a psychonaut to make the black look blue. Spore color differs, but only subtly. The habitat is the same, or at least overlapping, since both eat wood. The psychoactive and the deadly can, in fact, grow right next to each other, appearing to belong to the same flush. It is vitally important to positively identify every single specimen if gathering for consumption.

Wavy-cap has the same psychoactive components as other Psilocybes—largely and most famously psilocybin. The effects of eating all these mushrooms is therefore roughly similar except that because potency varies, dosing varies dramatically.

The high usually begins somewhere between 20 and 30 minutes after consumption and lasts anywhere from six to 15 hours, though more than eight hours is unusual[ix]. These mushrooms are famous for being hallucinogenic—and they are, especially at higher doses—but altered mood and altered thought-patterns may be more important to users. Altered thought-patterns, sometimes described as “psychosis,” often include valuable personal and spiritual insights. Euphoria is not uncommon—though not guaranteed.  Psilocybin is often described as an intensifier, strengthening whatever mindset the user had before the trip began, good or bad. Anxiety, sometimes intense, may be the most common serious side effect (see note under Toxicity).

Psilocybin (and the mushrooms that contain it) is sometimes used in large doses in an attempt to maximize intensity, but that’s not the only possible approach. It can also be taken in such tiny doses (“microdoses”) that hallucinations do not occur and the user can go about daily life normally, experiencing only a subtle change in mood and a more insightful frame of mind.

Some people use Psilocybe mushrooms essentially for entertainment, but others seek spiritual or even medical benefits. The benefits claimed for psilocybin use include alleviation of anxiety, depression, migraine headaches, and more, although so far scientific research only hints that some of these benefits may be real. None have been confirmed, yet.

Potency in the wavy-cap varies geographically (some writers separate it out into more than one species) with North American specimens being among the most potent psychoactive mushrooms known. As a ballpark figure, dosage is going to be just over half that of the more familiar Psilocybe cubensis[x].

That being said, dosage can vary between individual mushrooms of the same species and population, and human sensitivity to psilocybin also varies. And of course not every user wants the same intensity of experience every time, so how much a person takes also depends on what they want to happen. Dosage recommendations can therefore only ever be loose guidelines.

It’s better to err on the side of too little than too much, since bad reactions are more likely at higher doses.

Popular methods of consumption for Psilocybe cyanescens include Lemon Tek and Shroom Tea.

Growing wavy-caps indoors is difficult[xi]. Although the species takes well to pretty much any of the common substrate types, colonization time is very slow (up to eight weeks, depending on substrate), and fruiting requires careful manipulation of temperature. It’s often a better bet to protect and care for a wild patch than to grow batches indoors.

Wavy-cap can be bought commercially. It can also be grown indoors at home. Doing either risks certain problems.

One problem with purchasing material is that the seller might not know what their product is. A quick online search on “buying Psilocybe cyanescens” yields, among other things, sites offering “Psilocybe cyanescens truffles.” Actually, this species does not produce truffles, though Panaeolus cyanescens does, as do some other Psilocybes. It’s unclear what these sites are really selling, or what other cases of either misidentification or misrepresentation might be lurking out there.

How sure are you that the seller did not wild-harvest some Deadly Galerina?

A less-frightening, but still unpleasant, possibility is that the material may be old. Wavy-cap is particularly vulnerable to losing some of its famed potency while sitting in storage.

Clearly, buying magic mushrooms depends on finding a reputable buyer. Without one, growing at home begins to look extremely attractive, although wavy-cap is difficult to grow indoors, and success is likely to yield far more than a person can use quickly, meaning some of the harvest is going to lose its potency in storage.

Both options are against US Federal law, and against most state laws, too. The laws of other countries vary. Those who want to risk breaking the law should consider both the details of the law in their own jurisdiction and what they are looking to get out of the deal. For example, in some jurisdictions, buying spores is legal even though growing out the spores is not—meaning that growing at home, while still illegal, might be slightly more secure than buying. On the other hand, having an illegal mushroom grow in progress at home for months on end might be rather more worrisome than buying a couple of mushrooms and eating them right away.

Although arguably a better option is to do neither and wild-harvest. Just make sure identification is correct. Dying of amanitin-poisoning is an even worse trip than going to prison.

Undoubtedly, the most dangerous thing about eating wavy-cap (assuming it IS wavy-cap) is the law. In some jurisdiction, a conviction on drug charges can absolutely ruin a life.

Psilocybin itself is relatively safe in that it has caused few, if any, known fatalities. Its use is not risk-free, though. The most common unpleasant side-effect is nausea. Anxiety is also relatively common and can be intense—though the chance of having an anxious trip can be reduced by only taking mushrooms in a relaxed, happy mindset and in a safe, calm setting. Rarely, more serious reactions can occur, including convulsions.

It’s worth noting that the sensory distortions and unusual thoughts that psychonauts seek are themselves a serious problem for somebody who did not intend to trip. In that sense, wavy-cap is very much a toxic mushroom, it’s just that some people like its particular kind of intoxication, provided they are able to prepare for it.

It’s also worth noting that being other-than-sober does increase the risk of accidents of all kinds, even if everything goes well biochemically.

People who want to eat wavy cap can look after their own safety by: