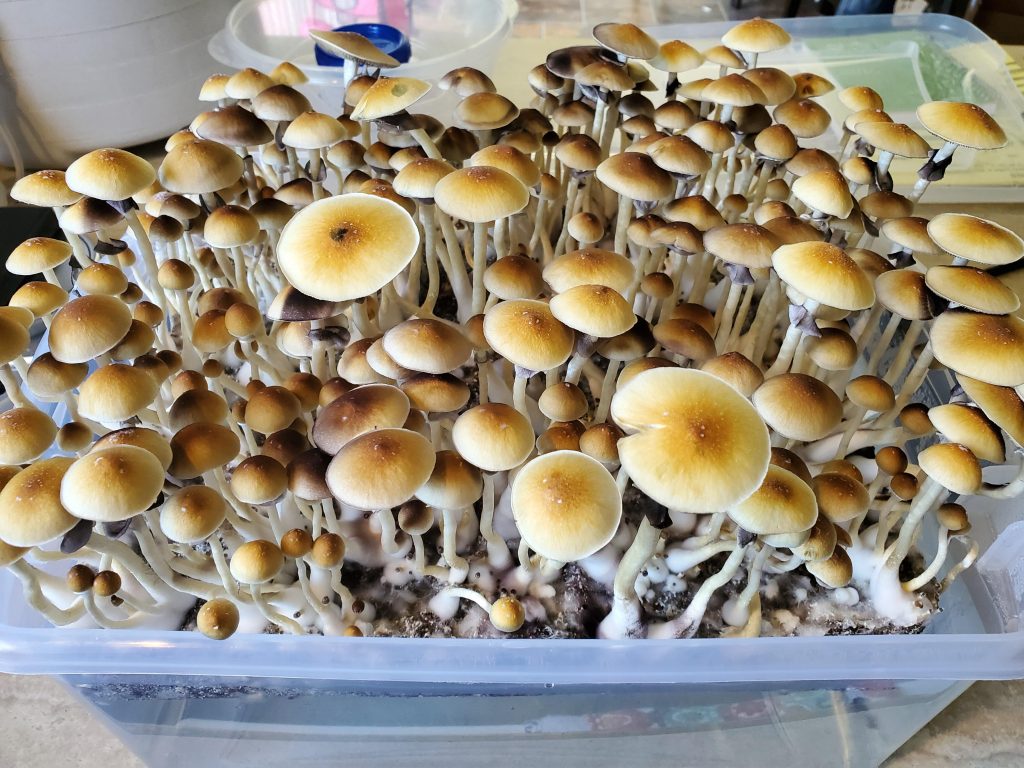 “Blue Meanie” is a name applied to at least two different mushrooms. One is a strain of Psilocybe cubensis. The other is the species Panaeolus cyanescens which is consider the “real” Blue Meanie. Both are psychoactive and sometimes used recreationally or medicinally, but it’s important not to confuse the two (though be careful, as some writers do mix them up). For one thing, Panaeolus cyanescens is dramatically more potent and therefor requires different dosing guidelines. Here we’re going to talk about Blue Meanie, the P. cubensis strain[i].

There are many cultivated strains of P. cubensis, some of them collected from the wild and some developed by growers. Blue Meanie is thought to be one of the former, having been collected from Australia. It does, indeed, bruise bluish if handled, but it’s not especially mean (it’s also not at all Meanie-like, a reference those who have seen the movie, Yellow Submarine, will understand).

P.cubensis, and all its various strains, is what people usually mean by phrases like “shrooms” or “magic mushrooms.” It’s not the only hallucinogenic mushroom species around—there are dozens of others that likewise contain significant amounts of psilocybin, plus some of the Amanitas contain a very different psychoactive substance, moscimol—but it may be the most popular. It grows wild across much of the world and feeds on the dung of mammals (it can be cultivated on other substrates, though). Its fruiting bodies are typically medium-sized with light-brown caps and a webby partial veil that tears just before spore release. But there is a lot of natural variation in color, size, cap shape, and psilocybin concentration.

There is some debate about whether different strains produce different kinds of trip. Certainly, trip experiences vary widely, but at least part of that is due to variation in the biochemistry of the users, as well as the specifics of their set and setting. Some people say that a cube is a cube, and that while the strains differ from each other in potency, their trips have no consistent, recognizable character apart from their identity as P. cubensis.

Other users beg to differ.

Psilocybe mushrooms are relatively safe to take (and a favorite for microdosing), but they are not risk-free. Most users experience at least some nausea with their trip, and more significant side effects, some of them serious, are possible. Responsible users pay attention to safety, increase dosage cautiously, and have a sober friend on hand to deal with any practical matters that may come up or to help cope with any physical or psychological issues in case the trip does not go as planned.

It’s worth noting that psilocybin, and anything that contains psilocybin, including Psilocybe mushrooms, is illegal to buy, sell, or possess in most jurisdictions. Please do not do anything that results in your going to prison.

Blue Meanie is considered among the most potent P. cubensis strains, with a high that is visual, physical, euphoric, energetic, and introspective[ii]. The trip usually begins anywhere from forty-five minutes to an hour after ingestion, though since the effects can go on intensifying for some time, users are advised not to take any more until at least three hours after the first dose. Trips can last four to five hours.

Sellers sometimes suggest dose sizes (for example, one gram, in the case of Blue Meanie), but really it’s not that simple. Is the user a newbie who wants a very light, introductory dose? An old hand who wants to get as high as possible? A microdoser? And is the mushroom dry or fresh (fresh includes a lot of water-weight, so the dose will be bigger)? Is the user big or little? A rough estimate[iii] for P. cubensis dosage can be calculated, but since both user sensitivity and mushroom potency vary, the result is only approximate.

Everything else being equal, a Blue Meanie dose will be smaller than average, since it is known to be a very potent strain.

Popular methods of consumption for Blue Meanies include Lemon Tek and Shroom Tea.

Blue Meanie fruits prolifically, though the individual mushrooms are not especially large. Colonization time is relatively short. There are no particular guidelines for growing this strain, as it does well in all of the methods usually used for P. cubensis. The only caveat is that whatever method a grower users, it’s important to do the method properly. Follow the instructions. Hybrid methods or sloppiness usually yield poor results. Blue Meanie is considered one of the easier strains to grow.

Both buying and growing magic mushrooms like Blue Meanie Cubensis have their advantages and disadvantages.

Growing mushrooms is, per dose, dramatically cheaper[iv]. For the cost of a single dose online, it’s possible to produce several dozen doses at home. Growers who collect their own spores (the procedure is simple; just leave a mushroom un-harvested until it fully matures and then make a spore print) can keep growing the same strain indefinitely by buying only more substrate. Although there are strains that are hard to collect spores from, Blue Meanie is not one of them.

Buying shrooms is faster, simpler, and a much better option for people who really only want one or two doses (novices who don’t know if they’ll like psilocybin, for example).

There is also the issue of legal risk[v]. In some areas, personal use of psilocybin has been decriminalized, but possession is still illegal. That puts growing Psilocybes in murky legal territory, and growers could find themselves very much at the mercy of the court. For them, buying a dose or two at a time may simply make more sense.

Where psilocybin has not been decriminalized, users find themselves between the proverbial rock and a hard place. With the exception of some jurisdictions, Psilocybe spores are legal to buy, sell, and possess, since the spores do not contain psilocybin. That means it’s possible to buy everything necessary for a grow without breaking the law—until the moment the spores germinate. For users secure in their privacy, the opportunity to buy everything legally is a great help. However, growers do have large amounts of illegal materials on hand for weeks or months at a time, a situation that could be a lot riskier than having a single dose in the house for a day or two every so often.

There is also the issue of quality[vi]. Buying Psilocybes means trusting the supplier—that’s great if the supplier is trustworthy, but if one isn’t, the buyer cannot sue or otherwise do anything about it. Home growers know exactly what they’ve got.