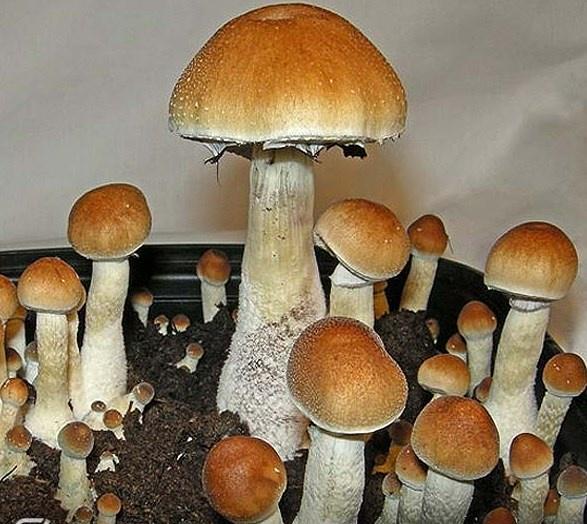 Z-Strain[i] is a cultivated variety of Psilocybe cubensis, a very popular species of hallucinogenic mushroom.

P.cubensis grows wild across much of the world. In the wild it feeds on and fruits from the dung of mammals and usually produces small to medium-sized, light-brown fruiting bodies, though there is a lot of natural variation. It is the best-known, and perhaps most widely-used member of a genus of many species all known for producing the psychoactive substance, psilocybin. When people talk about “shrooms” or “magic mushrooms,” they usually mean one of the Psilocybes, most commonly P. cubensis.

The Psilocybe mushrooms can produce uncomfortable—more rarely, even dangerous—side effects, but use seems to be relatively safe, at least in the short-term. Health effects of long-term use have not been studied. There is some evidence that psilocybin may have medicinal use, but again there has not been a lot of research. The experience of using Psilocybes varies a lot, in part because users themselves vary, but the concentration of psilocybin varies, too, between species and sometimes between mushrooms of the same species. Some strains are known for their visuals, others are known for their body high, and some are known for the clarity or insight they bring, or for some other quality—though whether these differences are real seems unclear.

In any case, Z-strain grows easily, fruits abundantly, and reportedly checks all the boxes—strong visuals, strong body high, everything. Individual mushrooms are typically large and meaty. Not surprisingly, it’s a very popular strain, the most commonly-available commercially-grown variety out there.

Z-strain is one of the most potent P. cubensis strains available. Visuals are strong and long-lasting, a simultaneously euphoric and physical high.

So how much should you take? The answer is not simple. For one thing, not everybody wants the same kind of experience. Novice users might prefer a light dose, while some experienced users really want to get as high as possible. Some users are interested in using mushrooms medicinally and want to avoid getting high at all—they’ll want to microdose. It’s possible to calculate a rough estimate[ii] for P. cubensis use with the user’s bodyweight, the condition of the mushroom (fresh mushroom doses are much larger than dried because they include a lot of water weight) and what kind of experience the user wants. But since people vary in their sensitivity, and mushrooms vary in their potency (even within a strain, potency varies), such calculations can only be approximate.

Z-strain is known for being one of the more potent P. cubensis strains, so ere on the small side for dosing.

Popular methods of consumption for Z-Strain include Lemon Tek and Shroom Tea.

Z-strain is very popular with growers because it quickly produces a very large, dense crop. Colonization time can be less than ten days[iii], and good results are easier than with many other strains.

Z-strain does well on any growing method used for P. cubensis[iv]. The decision has more to do with what works for the grower’s situation—for example, a well-funded commercial grower will have a dedicated, sterilized grow-room and will choose methods that maximize yield, while a hobbyist grower will prefer something small and simple (Like a Shotgun Fruiting Chamber or Monotub Tek)  In either case, the results are likely to be good, since Z-strain grows aggressively.

The big question, for many users, is whether to buy their supply or grow their own.

It’s worth noting that both options are extremely illegal in most jurisdictions. Please do not use anything in this article in a way that leads to prison time.

Buying magic mushrooms is simpler, faster, and potentially a good option for someone who only wants enough for one trip because it’s their first and they don’t know whether they’ll like it—even small grow set-ups produce far more than one dose. Buying might also be the only option for travelers, renters, students, or others who don’t have a stable, private, indoor space that can be dedicated to a mushroom crop.

Growing is substantially cheaper[v]. Even a grow kit—the simplest but most expensive option—comes in well under the cost of buying doses. Buying supplies and assembling one’s own grow set-up is cheaper yet, especially since home growers with their own set-ups don’t need to keep buying spores but can instead save their own. Shrooms are normally harvested before spore release, but growers can leave a few unharvested and then collect spore prints. There are strains that make collecting spores difficult, but Z-strain isn’t one of them.

Growing at home is also much more reliable in terms of quality[vi]. That magic mushroom sales are not regulated may be the understatement of the year; since buying the mushrooms is illegal to begin with, someone who buys material that has lost its potency or is otherwise not worth its price has no recourse. Criminals can’t sue each other for poor business practices! Worse, though many sellers grow their product, some do source theirs from the wild—and a mistake in identification could prove deadly (no, Z-strain does not grow wild, so such a scenario would also involve a dishonest seller).

Legal security is also a factor.

Buying psilocybin is illegal in most jurisdictions, but in many places (not all!) buying the spores of Psilocybe mushrooms is not. That’s because the laws often don’t proscribe mushroom species, only the drugs inside the mushroom. The legal status of a Psilocybe is the same as the legal status of a vial of psilocybin; the vial is not illegal, only its contents. And Psilocybe spores don’t contain psilocybin. Growing magic mushrooms is still against the law, but being able to at least set up the grow legally appeals to some people. On the other hand, just buying a dose or two at a time has advantages, too; there are some jurisdictions in which the possession and use of small amounts of psilocybin has been decriminalized. Even in places where use has not been decriminalized, the user who just buys doses as needed never has very much illegal material on hand and never for very long.