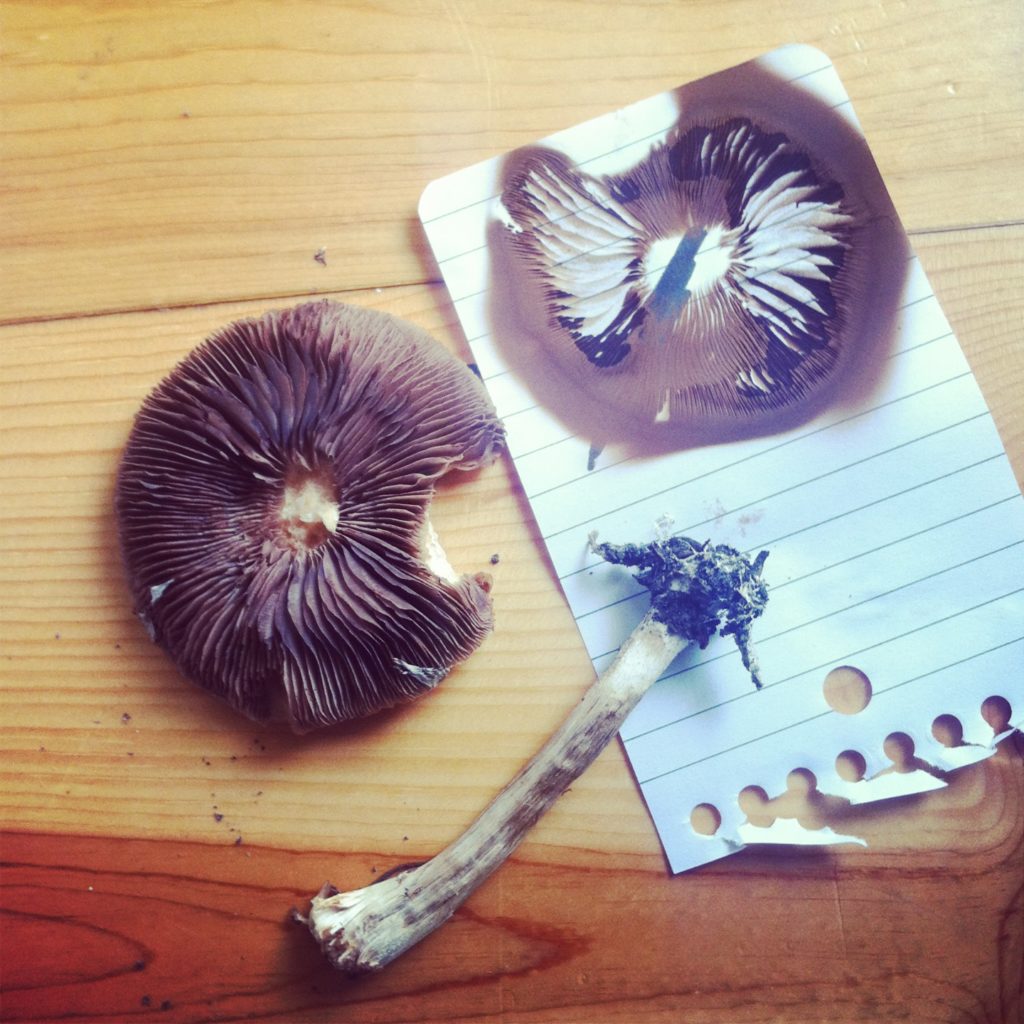 Anyone who becomes serious about mushroom identification—and quite a few whose interest is more casual—will first want a mushroom field guide and then  naturally progress to mushroom spore prints. It’s a fascinating hobby, and it’s absolutely critical for reliable identification.

Spores are the tiny, dust-like particles fungi (and a number of other organisms, from slime molds to ferns) use to propagate themselves, just as most plants use seeds. They are too small to see individually without a microscope, and microscopes don’t show color very well. The only way to discover the color is to collect a large number of spores just as they come out of the fruiting body—making a spore print, in other words.

The most important reason to make spore prints is to check the color for identification purposes. There are edible species that resemble poisonous ones in almost all respects except spore color, so foragers especially really do need to get in the habit of making prints. But there are other, less dire, reasons as well.

The spore-printing technique[i] is the only effective way to gather fungal spores, so cultivators who wish to start from wild-collected spores begin by making spore-prints[ii].

Spore prints are often beautiful, or at least interesting to look at, because they show not only the spore color (which can be lovely shades of red, green, white, black, or almost anything else) but also the pattern made by the arrangement of gills, pores, or whatever other spore-production structures the species in question has. There are those who make and collect spore-prints purely as a kind of art[iii].

The basic method of spore-printing is quite simple; place a mature, spore-producing fruiting body on a smooth surface, such as paper or wood, and wait long enough for the released spores to build up into something visible. The spores are so tiny that they stick to the surface, coloring it just as chalk dust or charcoal would, hence the word “print.” However, the details vary depending on the type of fruiting body and the interests of the person making the print.

The easiest—and the most visually interesting—prints come from classic-looking mushrooms, those with soft flesh and a flat bottom covered with the gills or pores that produce the spores. Because the flesh is soft, the mushroom is easy to harvest. There’s also little chance of a mature fruiting body persisting after it has stopped producing spores, as these tend to rot or be eaten by insects or slugs pretty quickly. And because the bottom is flat, when the spores fall on a surface that is also flat they show the pattern of gills or pores perfectly. The boletes (which have pores) and gilled groups such as the amanitas are good examples. Even some of the toothed mushrooms can work well, if their teeth hang from the flat under-surface of a cap, as in the hydnums.

The basic instructions are simple and straight-forward:

Those whose interest is primarily aesthetic will want to use an attractive paper in a color that will contrast with that of the spores. Use an entire mushroom cap, and be careful not to touch (and 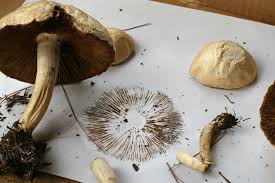 potentially damage) the spore-producing structures. Care may be necessary to prevent the print from smudging—spraying the finished print with a fixative is one option. Use sterile, archival-quality materials and the print should last for years. Conversely, a slap-dash print on construction paper makes a great project for children.

Those interested in collecting spores for propagation may prefer to print on a sheet of clear glass, since glass is easy to sterilize. All tools and materials (except the mushroom!) must be sterilized before use so as to avoid introducing weeds into the grow. If the spores aren’t needed yet, the print can be kept sterile by laying a second plate of clean glass on top of the first (making a glass-and-mushroom spore sandwich) and taping the sides closed—the glass makes the spores easy to examine (and the print easy to admire) without risk of contamination. If aesthetics are less important, it’s fine to use only a piece of the cap to make the print.

Those interested primarily in scientific study will also want to keep everything sterile, and may want to dry the mushroom for later study as well. Be sure to properly label the specimens.

Anyone collecting mushrooms may want to wrap one mature cap of each kind in aluminum foil before dropping it in the collecting basket. Depending on how long the foray lasts, there may be a spore print on the foil by the time the collector gets home—the print might not be the best quality, but it will show color and help confirm (or refute!) the identification made in the field.

Not all mushrooms have a nice, flat, spore-producing surface. Chanterelles don’t; they are shaped like little martini glasses with spore-pruducing ridges on the outside of the “glass.” Morels don’t; their spores come from pits on the outside of a bell-shaped cap. Lion’s Mane and its relatives don’t; they resemble the furry tribbles from Star Trek, with spore production on the “fur” (usually referred to as teeth or spines).  Puffballs certainly don’t; their spore production is entirely inside a ball with only one opening at the top.

The polypores, or conks, provide a different challenge; while their pore surfaces face obligingly down and are often nicely flat, many are tough or even woody. Not only is collecting these fruiting bodies difficult, but since many can persist for months after they are done producing spores—a few are perennial, producing spores in the proper season but not otherwise year after year—an incautious collector can easily bag a specimen with no spores.

There is no magic technique to make beautiful, clear spore prints with uncooperative mushrooms; the basic method of making a print remains the same. Mycophiles simply have to do their best.

With weirdly-shaped fruiting bodies, place at least part of the spore-production area on a flat surface, covering, and waiting, will product a print, it just won’t show as clear a pattern.  For example, place a chanterelle on its side. For tough and potentially long-lasting fruiting bodies, familiarity with the species will make it easier to tell if one is producing spores. A conk will sometimes helpfully make its own spore print on nearby vegetation, too, and may be possible to collect a decent print in the field without collecting the mushroom by taping some paper under the spore surface.

Maybe Not Spore Prints: Stinkhorns, Ink-Caps, and Others

Unfortunately, not all fungi can make spore prints. For example, the spores of stinkhorns are embedded in foul-smelling slime. Aside from being unpleasant for humans to work with, the slime obscures the color of the spores. Ink-caps don’t release their spores in a powder, either. Instead, the cap liquefies, and the spores are carried away in the liquid, although people still make spore prints with the goo. There may be others for which spore printing is difficult to impossible; it’s OK to acknowledge that fact. It’s still possible to collect spores from these species so as to examine the spores microscopically, it’s just that the print might not show the spore color well, and the result might not be pretty or easy to keep.

[i]  (n.d.). How to Make a Spore Print. North American Mycological Association