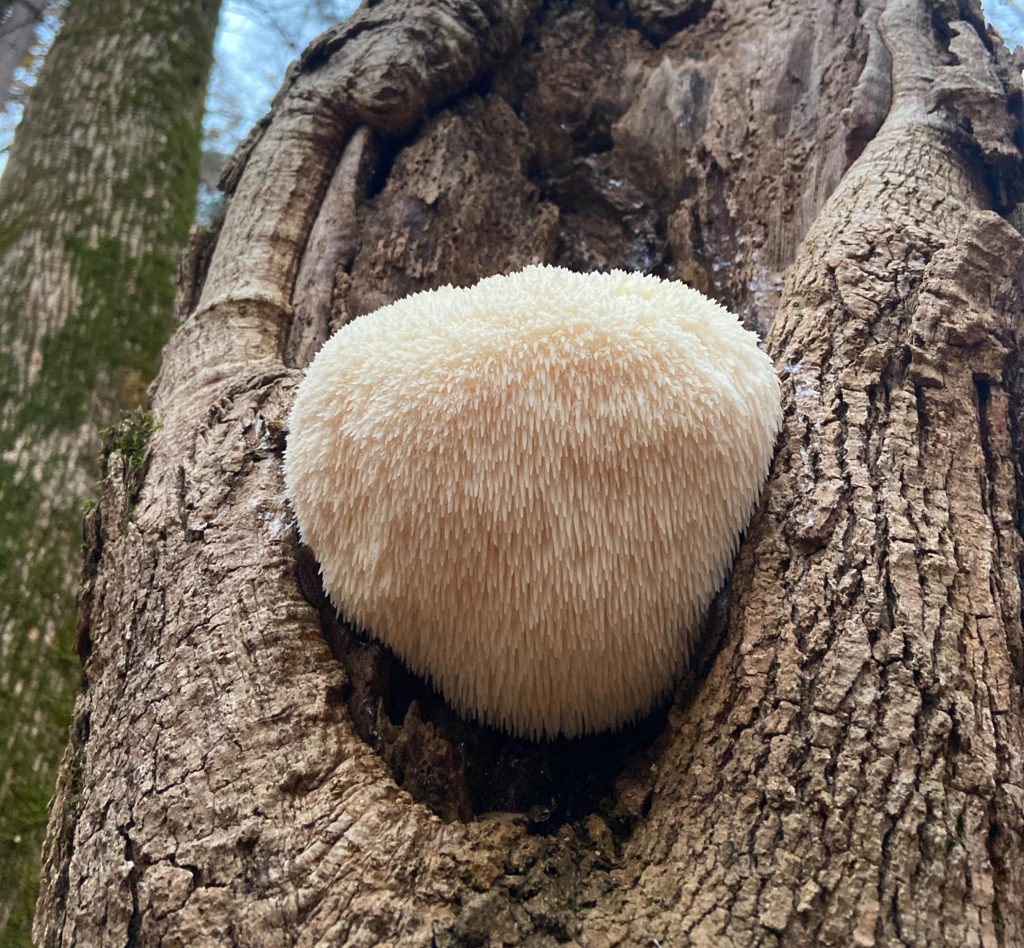 Lion’s mane (Hericium erinaceus) is a curiously-shaped exotic mushroom, resembling a clump of coarse, whitish hair; Star Trek fans may be strongly reminded of a tribble. The species is edible and makes a good substitute for lobster, crab, or certain kinds of fish in some recipes (the texture is not at all hairy). There are also a number of suspected medicinal uses.

The fungus is easy to cultivate and is often sold as pom-pom or white pom-pom. Other common names include hedgehog mushroom (not to be confused with Hydnum repandum and several others likewise called hedgehog), bearded tooth, satyr’s beard, and monkey head. The mushroom grows wild across North America and Eurasia.

In a hurry? Here is the Best Lions Mane Supplement on the Market.

Shape: Has no distinct cap. The fruiting body consists or an irregular, potato-sized lump covered all over with what looks like dense hair or soft spines. White initially, but yellowing with age (when dried, it turns brown). The flesh is white and does not change color when sliced.

Habitat: Grows from the wounds of living or dead hardwoods, especially oaks.

In cooler climates, the fungus fruits in late summer through early fall, but in warmer areas it may fruit in the winter.

The benefits of lion’s mane begin with its use as food. Not only is it delicious, but (like most mushrooms) it is low in calories and has no fat; the protein content is proportionately high, but it is difficult to eat enough mushroom for it to be a major source of protein[iii]. It is not a great source of micronutrients, but does contain some sodium, potassium, and iron.

Herbalists recommend lion’s mane and its extracts for various neurological problems from dementia to anxiety, as well as gastrointestinal problems, and to improve the healing of wounds; the effectiveness of these treatments has not yet been confirmed[iv].

Yet there is substantial evidence suggesting the medicinal potential of several substances produced by this species.

Lion’s Mane is widely considered an effective treatment for a wide variety of neural problems. And indeed, one study showed that eating lion’s mane reduced symptoms of mild cognitive impairment—however, there are some interesting complications[v].

The fruiting body of the lion’s mane contains a group of substances called hericenones, so it would seem that one or more hericenones are responsible for the effect—but in in vitro tests, hericenones don’t benefit neural tissue. Lion’s mane also produces a second group of substances, the erinacines, several of which do benefit neural tissue in vitro. For example, one erinacine enhances the synthesis of nerve growth factor (NGF) a substance involved in the growth and maintenance of nerves.

In in vitro studies, various erinacines have shown promise for treatment or prevention of certain types of dementia, depression, neuropathic pain, hearing loss associated with aging (which may be an early sign of some dementias), and damage related to strokes. Erinacines have also, so far, appeared non-toxic and safe to use.

However, erinacines are not found in the fruiting body of the fungus, only in the mycelium, meaning it is still unclear how—or even whether—eating the mushroom could treat neural problems. It is possible to eat mycelium, but it requires processing to remove it from the substrate, and the amounts contained in the mycelium are variable and generally very small. Worse, despite some promising studies in rats, it is not clear how or even if erinacines can cross the blood-brain barrier. Exactly what the future of lion’s mane is in neural medicine is not yet clear but there is a lot of user based accounts that swear by it for nootropic effects, mainly improvement to focus & cognition.

In separate studies, several different extracts of lion’s mane mushroom have successfully treated certain aspects of diabetes in animal models[vi]. Benefits have included lowering blood sugar, helping to reduce body fat, reducing inflammation (which can cause tissue damage), and reducing diabetic nerve pain. However, there have been few if any studies in human subjects and few if any studies on any anti-diabetic benefits of eating the mushroom as food.

Lion’s mane has been traditionally used to treat a variety of gastrointestinal complaints. In one study, an extract of the fungus successfully protected the stomachs of rats experimentally given gastric ulcers[vii]. A protein isolated from lion’s mane, HEP3, was tested against various experimentally-induced diseases in mice and rats and effectively treated Irritable Bowel Syndrome, as well as acting as an effective immunotherapy agent by altering the biota of the gut[viii].

A study[ix] found that two different types of lion’s mane extract impaired the ability of colon cancer in mice to metastisize. The study noted that not all extraction methods resulted in effective extracts, however.  An in-vitro study tested several lion’s mane extracts against cell lines of various human cancers with encouraging results and also established that the extracts were not toxic to mouse liver cells[x]. There have been other studies of lion’s mane as a source of anti-cancer drugs as well, but few if any clinical studies in humans and few if any studies of any anti-cancer effect of simply eating the mushroom.

Since lion’s mane is an edible mushroom, it can generally be eaten freely. Whether there is a minimum dose necessary to derive medicinal benefits is not clear. Extracts and other products of the mushroom are available for sale, but have not been clinically tested for effectiveness as medicine, so there is no clear information on what safe and effective doses might be. Those using the mushroom medicinally should follow the guidance of experienced, qualified practitioners able to use their own judgment

Lion’s mane is traditionally regarded as an edible mushroom and may be generally treated as safe—but poor reactions are possible[xi]. It is always possible for individuals to have allergies or sensitivity. Some people find the mushroom bothers the stomach.  And extracts and concentrates can also have different physical effects than whole foods; short-term testing has found various potentially medicinal substances found in lion’s mane to be non-toxic, but the effect of taking these substances long-term has not been studied.

Because lion’s mane mushroom has potential as a treatment for diabetes, it may also be able to lower blood sugar when not desired and could possibly interact badly with diabetes medication. Similarly, the mushroom may be able to slow clotting, which could also become a problem, especially in people already taking medications to slow clotting.

The greatest risk associated with the mushroom is simply the lack of clinical information about it.

2 thoughts on “Lions Mane Mushroom: Benefits and Uses of this Powerful Nootropic”