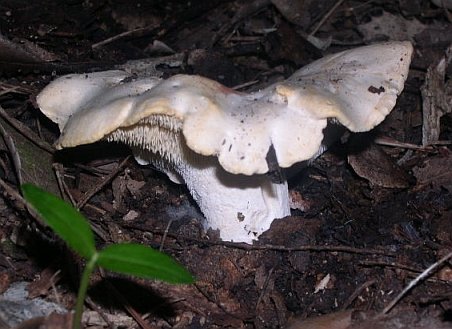 What is the Hedgehog Mushroom?

Hydnum repandum is one of several fungi commonly called hedgehog mushrooms because of their very distinctive pore-producing structures; rather than having gills or pores, these mushrooms have short, vertically-hanging teeth or spines on the under-surface of their caps. Not all of them are good to eat (at least one species has an acrid taste), but none are known to be toxic—a fortunate thing, as the differences among them are mostly mycroscopic. But H. repandum specifically is a popular edible and is at least suspected of having medicinal benefits.

H. repandum is often simply called hedgehog mushroom, but it can also be referred to as the wood hedgehog or the sweet tooth. The name “hedgehog” is also sometimes used to refer to Hericium erinaceus, more commonly called lion’s mane, but the two are not closely related or similar in appearance and are not likely to be confused.

Gills: There are no gills or pores. Instead, the under-surface and the upper part of the stem are covered with short, white, down-hanging teeth or spines. Only this mushroom and several close relatives have such teeth.Hymenophore: spines 0.2-0.6 cm long, brittle, cream-colored, bruising orange-brown, sometimes decurrent.
Stem: 2-7 cm tall, 1.5-2.5 cm thick, equal to enlarged at the base; attachment central to eccentric; surface dry, smooth, cream to buff-yellow, bruising orange-brown; veil absent.

Stem:  Centrally located to slightly off-center. Can be white or can be the same colors as the cap. Bruises brownish.

Taste: Mild to peppery when well-cooked (bitter if under-cooked)

Habitat: Scattered to gregarious under conifers or occasionally with hardwoods.

Hedgehog mushrooms are mycorhizal, meaning they have a mutually-beneficial relationship with trees. The fungal threads connect to tree roots, allowing the fungus to give the tree water and minerals (more than the tree’s roots could gather alone) in exchange for some of the sugar the tree makes through photosynthesis. The same fungus can connect to the roots of more than one tree, even trees of different species, and trees can pass sugar and information between each other through the fungal network. Mycorhizal fungi are one of the means by which trees can cooperate with each other. These fungi fruit from the ground near trees and, unlike fungi that attack and harm trees, can be associated with trees of almost any species.

Hedgehogs as a group vaguely resemble chanterelles. While confusion is unlikely (chanterelles don’t have teeth), the two groups may be related and share many microscopic features.

The main benefit of eating hedgehog is nutritional. The mushroom is low in fat and calories, high in protein, and is rich in several dietary minerals, especially iron and manganese, though it’s a very good source of magnesium, calcium, and zinc as well . Many people find it delicious, and it can be prepared in many ways, so it is a rather appealing form of health food.
Possible medicinal benefits include anti-tumor activity and anti-microbial activity, though these have not yet been extensively researched. Repandiol, a chemical substance isolated from hedgehog mushroom, shows strong anti-tumor activity in vitro . Several extracts made from the mushroom also proved at least partially effective against test microorganisms in culture . These substances have not been studied in human clinical trials, and while hedgehog is usually referred to as an “edible and medicinal mushroom,” it is rarely included in commercially available mushroom supplement blends.

An extract of the culture mycelia showed 70% inhibition against Sarcoma 180 solid cancer in mice, while extracts from the fruit bodies showed 90% inhibition against both Sarcoma 180 and Ehrlich solid cancer in mice (Ohtsuka et al., 1973). Furthermore, the compound repandiol described above showed potent cytotoxic activity against a variety of tumor cell types, especially colon adenocarcima cells, for which its IC50 is 0.30 (Takahashi et al., 1992).

Because hedgehog mushroom is primarily used as food, dosage is not generally a concern. Eaten in reasonable quantities, hedgehog is quite safe. Since its effectiveness as medicine has not been established, its therapeutic dose, if any, is unknown.

Hedgegog mushroom is generally considered safe to eat when cooked, but it is still possible for individuals to develop allergies or hypersensitivities—the same caution applies to any food, however. This species, like most mushrooms, should never be eaten raw.