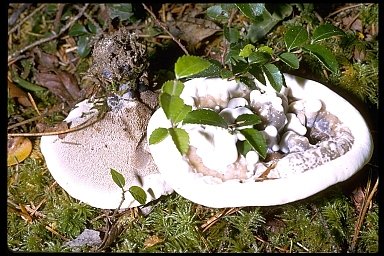 The terphenyl quinone, thelephoric acid was detected in Hydnellum suavolens, as well as various other members of the genus Hydnellum (Sullivan et al., 1967). This fungal pigment, used as a dye for silks and wools, is often used as a defining characteristic of the Thelephoraceae and Bankeraceae.

Fractionation of methanol extracts of the fruit bodies Hydnellum suaveolens resulted in isolation of two new p-terphenyl derivatives named hydnellins A and B as well as sarcodonin δ (previously identified in Sarcodon scabrosus) (Hashimoto et al., 2006).

Wood WF, Deshazer DA, Largent DL.
The identity and metabolic-fate of volatiles responsible for the odor of Hydnellum suaveolens.
Mycologia. 1988 80(2):252-5.