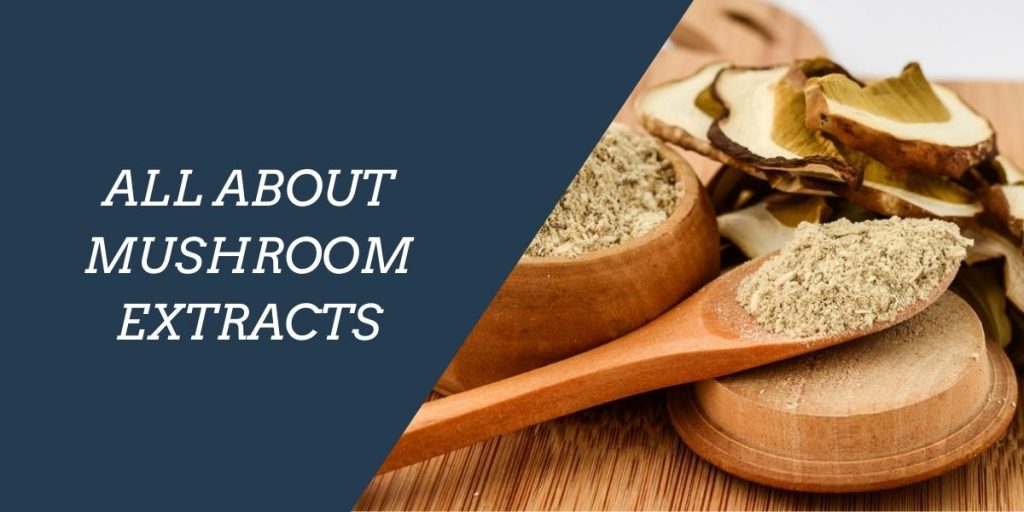 There are a lot of different ways you can consume mushrooms—cooked for dinner, in a pill, in a powder, and so forth. Some methods are better than others for certain species. Some, for example, are unpalatable and not worth having for dinner, while others have no known benefit except taste. But there are a couple of consistent guidelines, and one of these is that if you’re taking a mushroom product, it had better be an extract.

But what counts as an extract and what doesn’t? How do you find one worth buying? And what’s so special about extracts, anyway?

There are a couple of important caveats that come with using mushroom extracts for medical matters.

Why You Want a Hot-Water Mushroom Extract

There are, as noted earlier, all sorts of ways to prepare medicinal mushrooms, and most don’t work.

The problem is that each mushroom cell is protected by a cell wall of chitin, the same material insect exoskeletons are made of—and humans can’t digest it. If you swallow a piece of raw mushroom, most of those cells enter your digestive tract whole, and they emerge out the other side, still intact, with whatever nutrition and medicinal value they may have locked inside. You might as well drop your medicinal mushroom straight into the toilet—the result will be the same. Alcohol doesn’t break up chitin, either, so mushroom tinctures (tinctures are made by soaking something in alcohol) are useless. In fact, the only thing that can break up those cell walls is heat.

Hot-water extracts are the only kind of mushroom product that has any chance at all of working. They can come in pills, powders, or liquids, but don’t be fooled—all must have been made by brewing a super-concentrated tea and then processing that tea in some way, or they don’t count. Liquids or pills made by some other method don’t count. Powders made by dehydrating whole, raw mushroom don’t count. The only way to be sure something is a hot-water extract is to read the label.

In a similar way, the extract has to be made from mushroom—the fruiting body. Mycelium products are cheaper to produce but have little to no medicinal value, both because mycelium usually contains less of the medicinal substances, and because mycelium is impossible to fully separate from its growth substrate. You get an extract of mostly grain, or whatever the fungus was eating, not so much of the fungus itself.

There are a few species where the mycelium may have medicinal value of its own, but on most cases mycelium-based extract, or “full-spectrum” extracts made from both mycelium and fruiting body together, are scams, worthless products made cheaply so as to separate you from your money.

What to Look for in Mushroom Extracts

So, how might a buyer choose a good mushroom extract? If you are working under the guidance of a health-care professional, you can get a recommendation of a good brand that way. Otherwise, there are a couple of factors to look for.

Quality in a mushroom product starts with it being a hot-water extract of the fruiting body. The company also must be reputable, a brand that can be trusted not to be contaminated or mislabeled. Note that some common names, such as reishi, are regularly applied to more than one species, even though most species in the group have no connection to traditional healing and have never been researched. If you can’t find a scientific name, you don’t know what you’re getting.

A vague label is a bad sign. For example, if you can’t tell exactly how much beta glucan is in the product, that probably means the manufacturer has never bothered to test the product—there might not even be any in there at all. Note that although beta glucan is a polysaccharide, so are lots of other substances that have no medicinal value. A label that assures you there are plenty of polysaccharides isn’t telling you anything. And a label that doesn’t tell you anything is probably hiding something. Slick advertising is never a good replacement for honesty.

The best-made mushroom extract in the world is no good if it’s made from a mushroom that doesn’t have medicinal value. And some might not. Once again, research into medicinal mushrooms is very much in its infancy, though you’d never know it to look at some websites. There are species recommended very confidently by all sorts of people who appear to know what they’re talking about, all on the basis of a single preliminary study involving rats. The lack of information doesn’t mean the mushroom doesn’t work—but it doesn’t mean that it does, either.

Anecdote (knowing a friend who used a product and then felt better) isn’t reliable. There are many reasons a product could seem to help without actually helping (placebo effect, confirmation bias, coincidence…remember that if you have a cold and take a certain mushroom extract, your cold will be gone in about seven days—of course, your cold will be gone in seven days if you don’t take the mushroom, too!), that’s why we need the scientific process to figure out what treatments really work.

Tradition isn’t reliable, both because ancient wisdom can be wrong and because where traditional cures are effective, it’s not always the mushroom tea that did the trick—it might be community support, positive thinking, or some other factor.

So, what is reliable? Sometimes nothing is because we don’t know enough yet. But thorough research and the advice of a qualified, experienced practitioner will beat internet rumors any day.

Who Makes the Best Mushroom Extracts?

To choose a mushroom extract, then, make sure it is a hot-water extract of the fruiting body, that the company is reputable, and that the label tells you exactly what you’re getting. Make sure there is good reason to believe the product in question is effective. Always tell your doctor about any extracts or other supplements you are taking, and never try to treat something serious or potentially serious without the help of a doctor.

2 thoughts on “All About Mushroom Extracts: Who Makes the Best?”