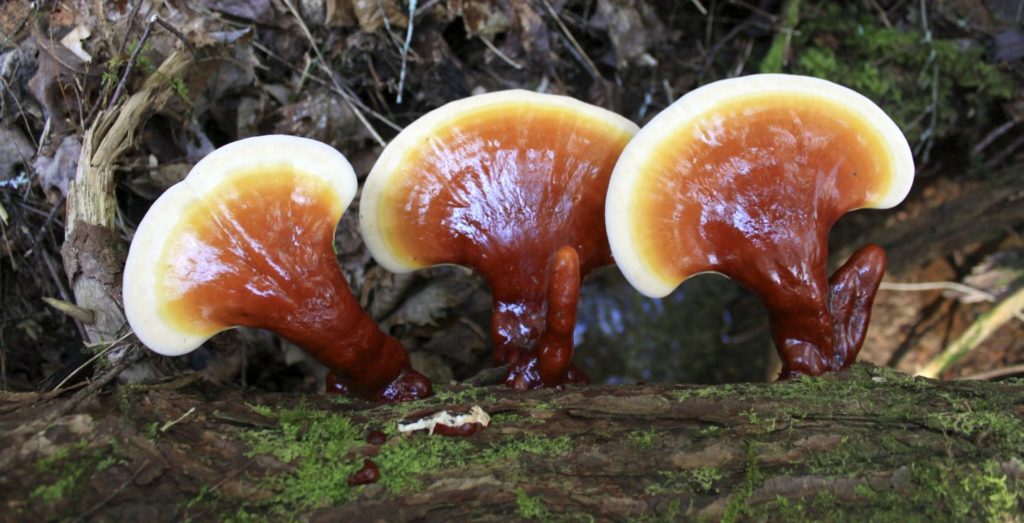 Ganoderma lucidum is an oriental medicinal fungus of the Ganodermataceae family and is known as Lingzhi in China, and Reishi or mannentake in Japan.  It is an exotic mushroom and is commonly called the “mushroom of immortality”, “mushroom of spiritual potency”, and “spirit plant”. The latin word lucid translates as brilliant or shiny. The Reishi mushroom is one of the easiest to identify and they do not have any well-known poisonous look-a likes. They can be eaten raw but they are tough; however, they are well known for their natural health boosting effects as a dietary supplement. When Reishi was rare it was reserved for royalty only. Reishi is an important feature in Chinese and Japanese artwork, it is associated with wisdom, sexual prowess, royalty and an eternal life. Reishi has been considered a natural health tonic that can capture and extend youthful qualities and improve energy. Reishi is very rare to find in the wild, in fact it is said that only 2 or 3 out of 10,000 aged tree’s will have a Lingzhi growth.

Cap: Large, dark orange to red colored mushroom. Woody texture and a glossy outside; kidney shaped. A leathery feel and slightly spongy.
Gills: Lack’s gills but the underside is a white to grey color.
Stem: Stem is peripherally inserted, making Reishi look like a fan.
Smell: Disputable, some describe as raw tomatoes and others as woody.
Taste: Very bitter.
Spores: Released via fine pores. Reishi spore oil is very precious in Chinese medicine.
Spore color: White or brown.
Edibility: Edible mushroom.
Habitat: Hot and humid areas; common in Asia. Grow at the base of large trees or near springs; causes white rot on a variety of tree species.
Ecology: Grows mid-April to June.

Thankfully Reishi has no poisonous lookalikes, however it does have a family member called Ganoderma tsugae that is so similar people have trouble telling them apart. It’s so closely related it is even referred to as Reishi or “Reishi Hemlock”. Ganoderma tsugae grows on conifers or hemlocks where Ganoderma lucidum grows on deciduous trees.

Reishi will be described using its scientific name Ganoderma lucidum, in this section. Ganoderma lucidum has been used for thousands of years across Asia to promote health and longevity and treat a number of diseases. The polysaccharides, peptides and triterpenoids are thought to be biologically active, providing health benefits. Interestingly, there are many studies that have relied on human subjects rather than just cell and animal models. There have been a number of positive outcomes whilst other studies stand to refute the benefits. Here we are discussing the positive outcomes that have been observed.

A recent review summarized the potential benefits of Ganoderma lucidum on cancer and was able to support evidence for the extract of the mushroom in apoptosis (controlled cell death), preventing cell proliferation, prevention of cell motility and invasiveness, in addition to inhibiting angiogenesis – new blood supply. Collectively, they provide an insight into the ability of Ganoderma lucidum to potentially kill cancer cells, prevent the tumor growing, or invading other tissues and preventing a new blood supply necessary to feed the tumor nutrients and metabolites required for is continued growth (Reviewed [1]). It is also considered that extract of Ganoderma lucidum may be used as an adjuvant, alongside chemotherapy to potentially improve the outcome of treatment.

A study looking at women with fibromyalgia observed a significant increase in physical fitness following a six-week treatment plan with Ganoderma lucidum. The ladies took 6g of Ganoderma lucidum per day and an increase in aerobic capacity, lower body flexibility and speed was reported. Fibromyalgia is a painful and life changing condition and this evidence provides promising preliminary results in improving quality of life [2].

Using high risk and stable angina patients, a study was able to show that the polysaccharide peptide derived from Ganoderma lucidum could be a viable potential therapeutic as a potent antioxidant in the disease condition atherosclerosis, these effects were observed in both the stable and high risk angina patients [3].

There is increasing evidence for excessive generation of reactive oxygen species (ROS) in the contribution of various diseases via triggering oxidative stress; such as, cancer. Oxidative stress is an imbalance between oxidants and antioxidants, and may cause extensive cellular damage increasing the aging process. One study in humans was able to show that 225mg of Ganoderma lucidum, once a day for 6 months saw a substantial improvement in antioxidant ability, with an increase in plasma antioxidant enzymes, crucial for antioxidant capabilities. The authors of the study indicate that these effects from the polysaccharides and triterpenoids of Ganoderma lucidum, potentially contribute to slowing the aging process [4.]. This supports the long held claim that this mushroom promotes longevity.

The study discussed above re: anti-aging, also took abdominal scans of the study subjects after the six months and saw a notable change in liver condition, reversing from mild fatty condition to normal. Whilst the study was small, this is important in supporting the case for Ganoderma lucidum in liver function.

Preliminary evidence from a group of patients in a clinical trial with oral presence of HPV (serotypes 16 and 18) is promising. The study shows that Ganoderma lucidum in combination with Trametes versicolor had an 88% success rate in clearance of the virus [5.]. Trametes versicolor is another medicinal mushroom (also known as Turkey Tail).

Patients with active rheumatoid arthritis were administered Ganoderma lucidum (4.0g) and San Miao San (2.4g), in addition to their usual medication. Patients, collectively reported a significant reduction in pain indicating that these medicinal herbs may have analgesic effects. Further blood analysis did not reveal a decrease in inflammatory markers, however [6.].

Men with mild to moderate LUTS, were given 6mg of Ganoderma lucidum for 12 weeks to assess the efficacy in symptom relief. When compared to the placebo, those that were administered Ganoderma lucidum, had a lower overall International Prostate Symptom Score (IPSS). The authors also report that the extract was well tolerated as this dose for 12 weeks [7.].

Obesity is associated with a number of health conditions, such as diabetes, cardiovascular disease and fatty liver disease; in addition to a shortened life expectancy. A water-based extract of Ganoderma lucidum given to obese mice, fed at the same time a high fat diet, saw a reduction in weight and fat accumulation, despite no change in feeding volume as measured by fecal waste; these changes were seen in a dose dependent manner [8]. Insulin resistance was reduced also reduced, providing confirmation of previous reports of a beneficial [8.]effect in diabetes. In addition, Mice receiving Ganoderma lucidum in their diet, saw a reduction in cell infiltration in the fat and liver tissues. Obesity is characterized by an increase in activation of inflammatory immune cells in the fat and liver tissues.

Furthermore, this study demonstrated a reduction in Proteobacteria, suggesting that Ganoderma lucidum has a positive effect on the gut microbiome in this mouse model.

Treatment with water-based extract of Ganoderma lucidum mycelium in rats, has been shown to produce anti-depression effects, in addition they suggest potential anti-anxiety (anxiolytic) type effects after administration [9.].

Treatment in castrated rats, with the fruit body of Ganoderma lucidum or the extract prepared from it, has been shown to significantly inhibit testosterone-induced growth of the ventral prostrate. These results suggest that Ganoderma lucidum be beneficial in the treatment of benign prostatic hyperplasia (prostate enlargement) [10.]. The mechanism of action was thought to be through the inhibition of dihydrotestosterone (DHT) by reducing the activity of 5a-reductase, a molecule that is involved in the production of DHT from testosterone.

A natural source such as Ganoderma lucidum that is able to inhibit androgens (as discussed in the anti-androgen section), also has the potential to prevent treatment of male pattern baldness. Hair follicles are sensitive to DHT and inhibition of its conversion from testosterone by 5a-reductase could prevent hair loss.

Traditionally, Ganoderma lucidum has been recommended by the Chinese and Japanese for treating sleep disorders, such as insomnia. Insomnia may affect up to 27% of the world population and it is therefore, important to find a therapeutic aid. It is suggested through many years of use that Ganoderma lucidum is sleep-promoting and has a sedative effect [11.].

A study in humans consuming 1.44g of Ganoderma lucidum daily for 12 weeks showed preliminary data suggesting that high density lipoprotein (HDL), the good type of cholesterol, was increased [12.]; however, it is noteworthy that there were some limitations to the study. This study detected no changes in blood pressure or body mass index (BMI).

After seven weeks of giving rats Ganoderma lucidum, blood pressure was reduced to a level that was comparable with losartan, a drug used to treat hypertension [13.].

There are many sources that indicate Ganoderma lucidum may be able to assist with fertility, unfortunately the scientific literature does not back this claim up.

Can be eaten fresh, although not pleasant in taste; although, commonly used as a powder, with the focus on the bioactive molecules. The appropriate dose of Reishi mushroom will depends on a number of factors, including age, health, and other health conditions that may be present. There is not enough scientific information to establish the correct dose for Reishi mushroom.

A review of the Reishi mushroom found one study recorded minimal side effects including insomnia and nausea; however, no hematological (blood works) or hepatological (liver) toxicity was reported; although, possible skin rashes and liver damage were highlighted elsewhere [14.]. It is thought that some of the side effects may be to do with more long term use as opposed to short terms, i.e. 1 month. A randomized trial on subjects administered 2g of Reishi, twice daily, for 10 consecutive days, showed no abnormal blood works or heart traces following the treatment [15.]. There are suggestions that those with low blood pressure should not use Reishi and those with thrombocytopenia should also avoid Reishi due to the potential risk of bleeding. Discussion with a medical practitioner is advised when using any dietary supplement.

There is not enough evidence to suggest that Reishi is safe to use when pregnant or breast feeding, always take professional advice before consuming in these circumstances.