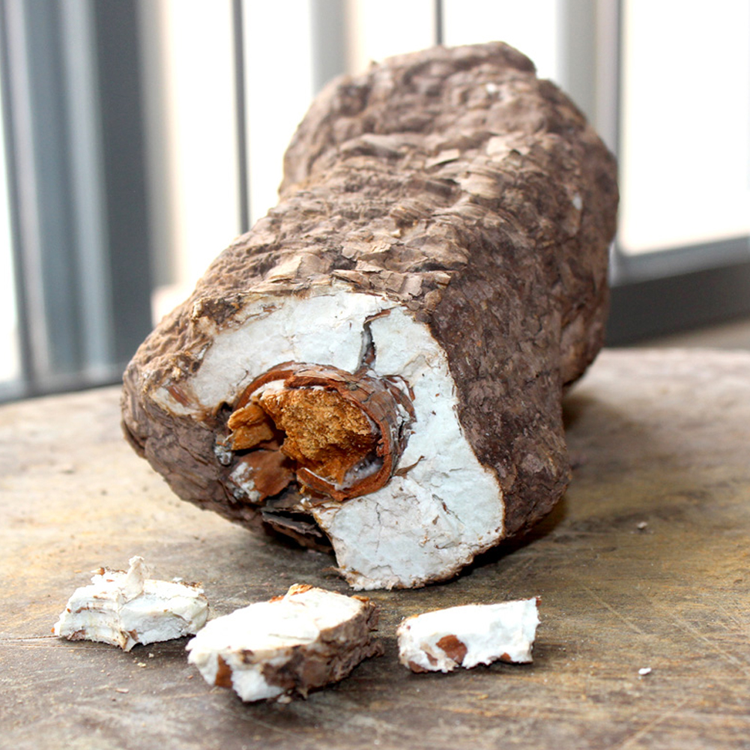 The Poria cocos mushroom characteristically has a large underground sclerotium; this is the compacted and hardened mycelium (filaments or threads) forming a mass that contains food resources. Poria is a wood decaying fungus and looks like a small coconut, mushroom or potato. In Chinese the sclerotium is called Tuckahoe or Fu ling. The Tuckahoe should not be confused with that used in Indian bread which is arrow arum. It is primary cultivated in China and was used to make delicacies and treats for members of the royal family.

The Poria mushroom contains natural substances that promote good health including polysaccharides and triterpenoids, these are thought to enhance immune system health and provide antioxidant benefits respectively. In view of this, Poria is one of the most sought after traditional medicinals in China.

Poria Mushroom is known by many names, but generally is referred to as any of the following: Fu Ling, WolfiPoria Extensa, or China Root.

Fruiting body: The sclerotium is up to 30cm long and up to 1kg in weight. Colored from pale red to white but commonly light brown.
Smell: The smell has been described as both odorless and ‘special’.
Taste: Sweet but mild.
Spores: Germinate and infect the root of plants growing and reproducing sclerotia.
Edibility: Edible; used to cook with or used as a medicinal herb.
Habitat: Grows on pine trees, in particular Japanese red and Masson Pine; plus fir trees. In the wild, it grows very much like the European truffle.

Poria is a pretty distinct looking mushroom, I can’t think of any other mushroom that looks similar to a coconut. It’s generally not confused with anything.

In China, the Poria mushroom is one of the most commonly prescribed traditional medicine and used in a variety of health conditions, as discussed below. It has been in use for more than two thousand years and pharmacological studies have shown that the abundant source of polysaccharides in Poria provide its biological effects along with triterpenoids, fatty acids, sterols and enzymes. In some cases, such as anxiety and insomnia, there is little scientific research to support the role of Poria, despite it being so commonly used. This is not necessarily due to a lack of effect but rather, the lack of research. It is important to note that before self-administering the Poria mushroom for treatment of any health conditions, advice should be sought from a qualified medical practitioner, this will ensure the safety of the mushroom and highlight any contraindications.

A review of the in vitro and in vivo effects of Poria was summarized by Li et al [1.]. In vitro they observed the effects of extracts of Poria polysaccharides and its derivatives on human cancer cell lines for gastric cancer, breast cancer, Liver and leukemia. Generally, the effect of the Poria extract was concentration dependent and varied between cancer types when the in vitro data was examined. Positive results were particularly seen with the liver cancer cells with cell growth inhibition observed. In contrast, in vivo animal models where animals were injected with cancer cells saw a more striking effect with concentration dependent reduction in tumor weight. Within range statistically significant anti-tumor effects were seen in the sarcoma induced, cervical cancer induced and the Ehrlich-Lettre ascites (EAC) cancer cell induced mouse models.

Interestingly, in a mouse model of Gastric cancer, Poria extract in addition to a chemotherapy-type drug (oxaliplatin) were given in tandem. The study saw that this combination could significantly inhibit the migration and invasion of gastric cancer cells in vitro and in vivo; furthermore, Poria combined with oxaliplatin could significantly affect the tumor morphology [2.]. This data suggests that the administration of Poria in conjunction with chemotherapy could prove beneficial.

A review of studies on cancer cells have suggested that the positive anti-tumor effects seen may be directly linked to the ability of the Poria mushroom to 1) activate immune cells important for innate immunity, leading to an enhancement of natural defense mechanisms 2) Increase cytokines (natural immune modulating factors) to help the cell killing ability of natural killer cells 3) stimulate apoptosis (controlled cell death) and 4) Poria may be able to regulate important enzymes that control the growth and expansion of cancer cells and their ability to become cancerous [1.].

In vitro studies, demonstrated that high concentration levels of a Poria polysaccharide, was able to suppress the growth of B cells (B Lymphocytes). This is preliminary evidence but further supports a role for Poria in immune system modulation [3.] in this case via down regulation of some immune responses, this may be of particular importance in antibody mediated autoimmune disease conditions.

A common cause of liver problems is non-alcoholic fatty liver disease (NAFLD), the first step of which is hepatic steatosis characterized by the presence of triglyceride (Tg) accumulation; triglycerides are a species of fat.  A study observing the effects of Poria in vitro and in vivo showed that cells treated with Poria extract saw a reduction in Tg and mice with increased levels of fat due to a high fat diet, saw a reduction in liver Tg. Collectively, the evidence supports a tole for Poria in the improvement of hepatic steatosis [4.] and subsequent liver conditions; therefore, providing a supporting role in liver health.

In China Poria is a key component of some anti-depressant treatments including Xiaoyaosan and Banxia Houpu decoction [3]. Recently, using a mouse model to study the effects of Poria on depression, it was shown that two polysaccharides from Poria had positive effects and Poria could be a suitable candidate for treatment of depression.

A review of 1498 citations of dementia and memory impairments associated with aging and consistent with the clinical features of Alzheimer’s disease were examined and Poria featured regularly as an ingredient in formulas used to treat the aging memory [5.]. Alzheimer’s is the principle type of dementia and is characterized by plaque deposits of beta-amyloid in the brain contributing to neurotoxicity. In the presence of amyloid beta protein, in vitro, there is cell death and oxidative damage. In contrast, when cells were pre-treated with a water-based extract of Poria (5-125µg/ml), there was a reduction in cell death and Poria appeared to suppress oxidative stress and increase the levels of protective proteins. The authors suggest that Poria may be a natural target in the treatment of Alzheimer’s disease [6.].

When Poria is used in conjunction with other medicinal herbs and administered as Zhenxuanyin, a rat study showed that 0.03 – 3g/kg a day, greatly improved blood flow in primary cerebral regions of the brain [7.].

In vitro, examination of ethanol extract of Poria, showed a decrease in inflammatory cytokines (immune system modulators) levels by interfering with gene expression of the molecules. Indicating, anti-inflammatory capabilities important in conditions such as arthritis [8.].

Poria extract is frequently and well known in the treatment of anxiety disorders in traditional Chinese medicine; however, there is a distinct lack of scientific research relating to how Poria exerts its effects [11.].

Preliminary studies have shown positive effects from the triterpenes taken from the whole Poria (5-160 mg/kg) in the prevention of convulsions in an epileptic mouse model, further work is required to understand the mechanism of action; however, the authors indicate Poria is a potential anti-epileptic drug candidate [12.].

A study in young rats administered with a dietary supplement, that also included Poria polysaccharides, showed positive effects in the promotion colonization and maturation of intestinal microbiota and may maintain the health of the intestinal micro-ecosystem [13.].

A study looking at mice with induced colitis and the effects of Poria polysaccharide CMP33, showed that CMP33 markedly lessened the severity of the colitis, including a reduction in mouse death and a decrease in the macroscopic and microscopic changes associated with the bowel in this disease [14.].

The anti-inflammatory effect of Poria on dermatitis was evaluated on an experimentally induced irritant contact dermatitis and statistically significant anti-inflammatory responses was observed [15.]. This study was performed on otherwise healthy humans that were exposed to an irritant before the administration of Poria extract.

The symptoms of Dampness accumulation are oedema, difficulty urinating, retention of urine, lack of energy, a build-up of phlegm, abdomen distension, diarrhoea, and joint pain. Poria extract, usually in the form of a concoction with a variety of names, has traditionally been used in Chinese medicine to eliminate excess fluid to aid with dampness and promote a healthy kidney function [16.].

In addition to the administration of conventional medicines, a traditional Chinese medicine with a mixture of medicinal herbs, including Poria, was effective in easing symptoms in 84% of patients with tinnitus [17.].

Poria is edible. It can be cooked with or taken as a dietary supplementation.

Despite being used in Chinese medicine for centuries, there is little scientific research relating to the safety of the Poria mushroom or any long-term effects; this is due to the lack of studies in humans. Always err on the side of caution when ingesting for the first time due to potential allergic reactions. If pregnant or nursing avoid using or seek medical advice before administering the Poria mushroom. It is noteworthy that cytotoxicity tests performed on cells with a concentration dosage of 10-200µg/mL saw no toxicity [3.].