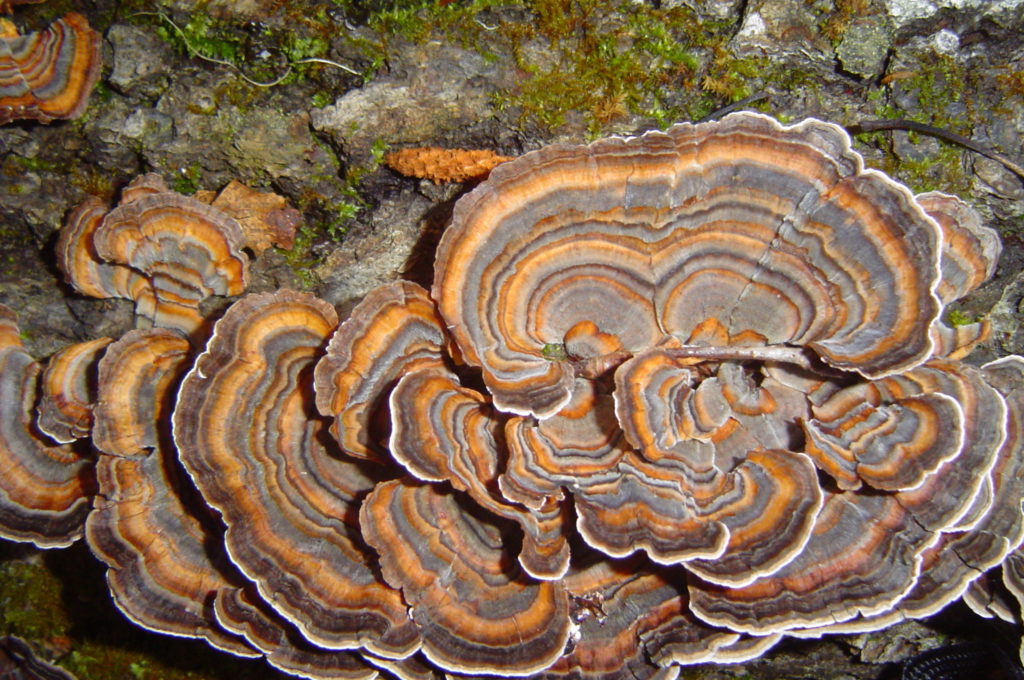 Trametes versicolor[i] is an exotic looking mushroom. It is one of those species that occasionally turns up listed with other scientific names, such as Coriolus versicolor, in part because the name changed decades ago and some sources haven’t caught up yet. Fortunately, the common name, Turkey Tail is used fairly consistently in North America, reducing the potential for confusion. In Great Britain, the traditional common name is “many-zoned polypore,” although “turkey tail” is making inroads there, too. The species is common across Europe and Asia as well.

Turkey tail is a shelf fungus that does vaguely resemble the fanned-out tail of a turkey in miniature. Its distinct, contrasting colors make it one of the more attractive fungi, and the presence of its fruiting bodies can be used by naturalists to estimate how long ago a tree stump was cut. While turkey tail is too tough to be palatable, it isn’t toxic and can be used to make tea or broth[ii].

The species has been used in traditional Chinese medicine  (where it is known as yun zhi), and turkey tail products are popular among alternative medicine enthusiasts. While not all such products work as advertised, scientific research has supported the medicinal potential of the species.

Cap: Thin, tough, and flexible when fresh. Roughly fan-shaped. Several caps may emerge as a group, and some may fuse together. Concentric zones of often contrasting colors on the upper side is a distinctive trait, and the different color zones may also have different surface textures, such as hairy or velvety. The colors themselves vary dramatically between individuals; white, gray, brown, and reddish-brown are common, but orange, blue, and green are possible, too. Caps are typically small to mid-sized.
Gills: No gills. The pore surface is white to brownish and does not bruise. The pores are smaller and more densely-packed than in similar species.
Stem: No stem.
Smell: Nothing distinctive.
Taste: Nothing distinctive.
Spores: Cylindrical and smooth.
Spore color: Whitish.
Edibility: Not palatable, prepared as a medicinal mushroom.
Habitat: Eats dead wood, usually hardwoods, occasionally conifers. The fruiting bodies are persistent and can be found year-round.

Turkey tail[iii] has some genuine look-alikes, but it can also be lumped in with a large number of species that only vaguely resemble it–”turkey tail” is a name used by some collectors to mean something like “miscellaneous shelf or crust fungi.” Naturally, such usage has the potential to create confusion among beginners.

In a hurry? Here is our #1 Rated Turkey Tail on the Market Today

Common look-alikes include other members of the Trametes genus, as well as crust fungi, like Stereum ostrea.

The crust fungi[iv], despite the name, do not necessarily look crusty. Instead, they are a large group of wood-digesting fungi that all bear their spores on smooth, wrinkled, or pimpled surfaces, not pores or spines or gills. Many are not closely related to each other. Some do look startlingly like turkey tail—S. ostrea is actually called false turkey-tail—but since they lack pores they are easy to distinguish from true turkey tails by anyone who takes the time to look closely at the undersides.

The other trametes species are a little more difficult to sort out, as they are close relatives of turkey tail and do share similar structures, plus members of this group of species are variable, making precise description difficult. None are known to be poisonous, but it’s best to be sure of identification just in case (and other tramates might be very different medicinally).

The best way to differentiate real turkey tail from its look-alikes is to take a close look for several key characteristics, all of which must be present or it isn’t turkey tail[v]:

An article such as this one cannot be used as a substitute for a field guide or the tutelage of an expert. The above information should be regarded as a hint for what to look for only.

Turkey tail mushroom is not palatable and is not used as food (though, curiously, the actual tails of turkeys are[vi]) and the tea is not generally drunk for the taste (though reportedly it does not taste bad[vii]). Instead, it is the species’ reputed medicinal qualities that drive its popularity.

There is good evidence that turkey tail extracts, taken with chemotherapy or radiation therapy, can make these traditional cancer treatments more effective[viii]. There are other health claims made for the species as well, including that it functions as an antibacterial and an antiviral, and that it can improve digestive health, combat diabetes, and improve athletic performance. Some research supports each of these claims, but it is preliminary, resting largely on in vitro studies. While drugs derived from turkey tail are approved in some countries for use with cancer treatments, other applications are considered not yet proven.

Curiously, this one species has been more heavily researched than all other potentially medicinal mushroom species[ix]. What follows is only a sampling of the available material, not anywhere near an exhaustive survey.

Although turkey tail is confirmed in its ability to render chemotherapy and radiation therapy more effective, it may also have direct anti-cancer effects of its own.

Various animal studies suggest that some chemical constituents of turkey tail may have some direct anti-tumor effect, at least for some cancer types, as well as an ability to strengthen various aspects of the immune response against cancer[x]. The immune-building effects are stronger than the anti-tumor effects.

Substances within Turkey tail can act as powerful anti-oxidants, especially when enhanced through processing, as shown by chemical investigation and in vitro studies with cultured cells[xi].

Turkey tail extract can kill and deform both gram-positive and gram-negative bacteria, though exactly how the bacterial cells are damaged depends on the bacteria species[xii]. Although the extract shows promise as medicine, the initial study was done only on lab-grown bacteria, not in human patients.

Another study, also strictly in vitro, compared the medicinal potential of turkey tail with that of two of its close relatives and also compared the effects of extracts of the fruiting bodies with extracts of the mycelium[xiii].  The study specifically tested the extracts against several types of fungus that cause disease in humans and against several types of cancer cells, as well as checking for antioxidant activity and for chemical markers that suggest antineurodegenerative properties. All three species appeared effective to varying degrees, though in some cases the mycelium extract out-performed the fruiting body extract.

In a preliminary clinical study, human patients taking a turkey tail extract and one or more other herbal or fungal products saw improved immune function and other benefits, though more research is needed to confirm those results[xiv].

A turkey tail extract given to Type 2 diabetic rats improved several markers of health, including lowering insulin resistance[xv]. The study also examined the biochemical pathways involved in the effect.

An in vitro study using human cell lines also showed that a turkey tail extract could improve glucose uptake[xvii]. Curiously, the cells in question were cancer cells treated to make them insulin-resistant. The turkey tail material had been fermented prior to extraction.

A turkey tail mycelium extract given to mice improved both forelimb grip strength and endurance (as measured by the presence of chemical markers for exhaustion in the blood following exercise)[xviii].

One study involving healthy human volunteers examined changes in the gut microbiome following dosing with either an antibiotic, an extract of turkey tail, or nothing at all (in the control group)[xix]. Both those receiving turkey tail and those receiving the antibiotic showed characteristic changes in their gut biomes. The authors of the paper describe the effects of turkey tail as being consistent with it being a prebiotic. The study did not address whether the turkey tail extract might be able to protect against the effects of the antibiotic, since no volunteer received both. The study also did not address whether turkey tail extracts could be used to treat any gut health problem, because all of the volunteers were healthy.

In a hurry? Here is our #1 Rated Turkey Tail on the Market Today

For dosing information, consult an experienced practitioner. Be aware that dosing applies to the amount of medicinal substance consumed, not the amount of mushroom or mushroom product, so the size of the effective dose depends on what product is being used and how that product was produced. Some products that were not processed correctly might be medically worthless—most mushrooms are not bioavailable raw. Be aware that tinctures may be worthless and you are strongly encouraged to use an extract.

Turkey tail is generally considered safe; although people taking turkey tail extract as part of cancer treatment often do experience a variety of symptoms, these may be side effects of the chemotherapy agents, not the fungus. It’s not known whether turkey tail might cause problems for people with specific medical conditions (such as illness or pregnancy), nor whether it might interact with other drugs[xx].

[x] Saleh, M. H., Rashedi, I., Keating, A. (2017). Immunomodulatory Properties of Coriolus versicolor. The Role of Polysaccharopeptide. Frontiers in Immunology. 8: 1087.

[xiv] Saleh, M. H., Rashedi, I., Keating, A. (2017). Immunomodulatory Properties of Coriolus versicolor. The Role of Polysaccharopeptide. Frontiers in Immunology. 8: 1087.