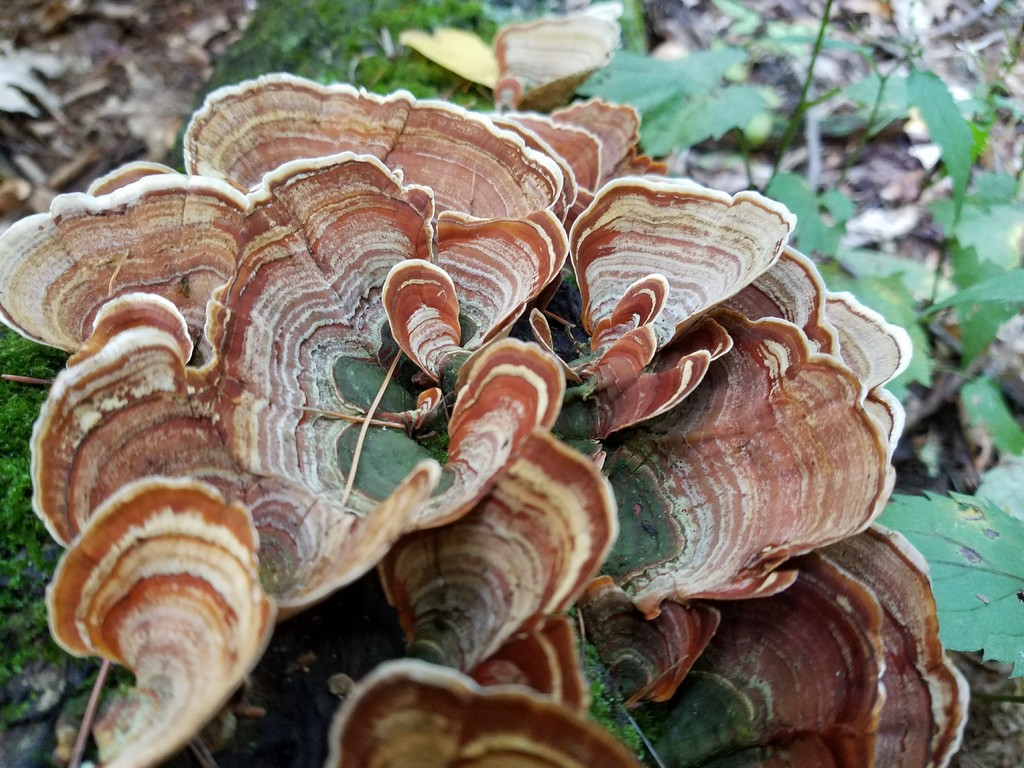 Stereum ostrea, familiar to most as the “False Turkey Tail” as it resembles the “True Turkey Tail” Trametes versicolor, get its name from its fan-shaped fruiting body with bands on it that remind one of of a turkey’s tail. Characteristically, it is a large, colorful mushroom belonging to the family of Stereaceae. [i]

Stereum ostrea is widely distributed throughout the world and is a saprophytic mushroom, meaning that it is found growing on dead hardwood trees in dense overlapping clusters.

Cap/Fruiting Body: The cap or rather the fruiting body of this species is fan-shaped or irregularly kidney-shaped; thin and approximately 1-7 centimeters in width. The texture of the cap is velvety or hairy while the mushroom is young, but as it matures it will smoothen. With regard to color, the caps have concentric red, orange, buff, yellow, and brown bands. With maturity, the cap may take on a green shade, imparted by the growth of epiphytic green alga which have a commensal relationship with the fungus.
Gills/Undersurface: The undersurface of this lacks pores and is smooth, with a possibility of small bumps. The color of the undersurface is most commonly grayish, cinnamon-buff, or reddish brown.
Stem:  This species lacks a stem.
Spores: The spores of this species are white, smooth, cylindric, and amyloid (turning blue upon exposure to Melzer’s iodine reagent). With regard to dimensions, they are 5.5-7.5 x 2-3 µm in size.
Spore Print: Spore print is very hard to obtain, but is white.
Smell: The species has no distinctive odor.
Flavor and Edibility: S. ostrea is not considered edible as it has very thin, tough, and leathery flesh.
Habitat: Stereum ostrea, as mentioned in the introduction, is a saprophytic mushroom found growing on dead bodies of hardwood trees. They grow individually, in dense clusters without fusing together. Their growth is often associated with “white rot”.
Range: This specimens of this species can be found growing throughout the year and all around the world. In North America it is widely distributed, found in almost all states.

Other species that this species may get confused for include other Stereaceae species, such as Stereum hirsutum and Stereum complicatum. What makes things even more confusing is the fact that Stereum ostrea can sometimes mate with these species and produce intermixed variants.

Stereum ostrea contains interesting chemicals which have made it a target for folk remedies for a very long time. A recent study from Korea showed that this species of mushroom contained certain compounds such as sesquiterpene, that have potentials for inhibiting microbial/bacterial growth.[iv]

The species of Stereum ostrea is not toxic, but is inedible.