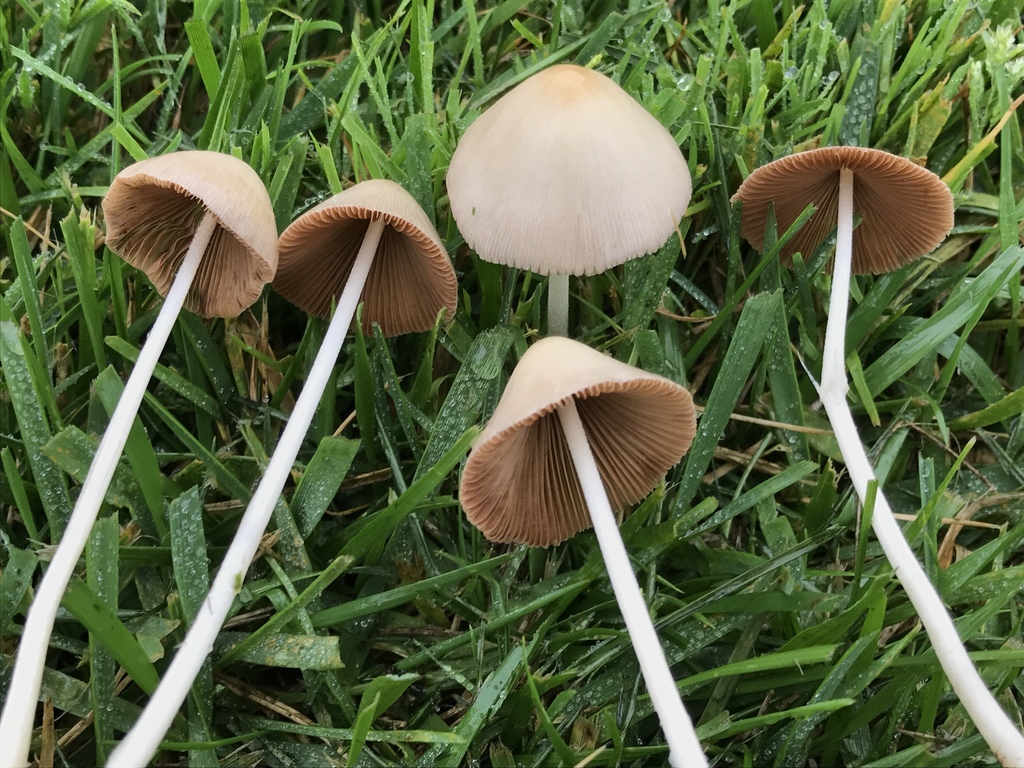 Conocybe apala, also known as the “Milky Conecap” or the “White Dunce Cap”, is a small to medium gill fungus, with a fragile, whitish, bell-shaped cap on a spindly stem that can be widely found on lawns, golf courses, and parks of Europe and North America during early summer mornings, especially after heavy rainshowers.[i]

This species was first described in 1821 by the notable Swedish mycologist Elias Magnus Fries who named it Agaricus apalus. However, in 2003 this mushroom received its current scientific name of Conocybe apala by the Dutch mycologist Eef Arnolds. Unfortunately, the name of this species still remains confusing as it is often varied in mycological literature. Alternative names for Conocybe apala include Conocybe lactea, Conocybe lateritia, Conocybe albipes, Conocybe crispa as well as by Agaricus tener, Agaricus apalus, Mycena tenera, Bolbitius tener, Bolbitius albipes, Bolbitius lacteus, Galera apala, and Galera lactea.[ii]

The current scientific name of this species in Latin is derived from its two characteristics. The conical shape of its cap (Cono- meaning bell-shaped and cybe meaning head) and the fragility of its stem (apala meaning fragile or soft).

Cap: The cap of this species is  0.5 to 2.5 centimeters broad and 0.8 to 3 centimeters long. While young, the cap is slender and sharply conical, but as it ages it expands, becoming centrally bell-shaped with uplifted outer edges. The surface is dry, smooth and bald, with fine radial wrinkles at maturity. In color, the cap is milky white and eventually turns pale beige.
Flesh: The flesh of this species is very thin and fragile, often with splits from the edges. The flesh is beige to buff in color.
Gills: The gills of this species are close, and very narrowly attached to the stem (adnexed). In color, the gills are white at first, becoming yellowish-brown and then cinnamon-orange as spores mature. In hot, humid whether the gills of this species can dissolve.
Stem:  The stem is 7 to 10 centimeters long and 1 to 2 millimeters thick. It is more or less cylindric, with a slightly expanded base and no ring. The stem is hollow, very slender, and extremely fragile. The surface is nearly cream-white throughout, or sometimes yellowish at the base. Furthermore, the stem contains minute, soft white hairs at the apex and is either bald or covered in fine down below.
Spores:  This species contains large, thick walled (0.5–1 micrometers thick), smooth, broadly ellipsoid spores which are 10-15 x 6-9 micrometers in size.
Spore Print: Spore print of this species is orange- to cinnamon-brown
Flavor and Smell: This species has no distinctive odor or taste.
Edibility: Conocybe apala is not really a good example of a “choice edible” mushroom, as it is very small in size and has thin flesh. Furthermore, some mycologists regard it as potentially toxic as the Conocybe mushrooms are known to contain similar amatoxins found in genuses such as Amanita, Galerina, and Lepiota. As such, it is best to avoid consuming Conocybe apala due its lack of culinary value and potential deadly toxicity. I personally classify Conocybe apala as poisonous.
Habitat and Ecology: Conocybe apala is saprobic, meaning that is survives by using decomposing dead or decaying organic material for food. They are usually found fruiting from late spring to fall in lawns, grasslands, dead moss, mulch, and decaying wood under hot and humid conditions. They frequently pop up after heavy rainfall and persists only for 24 to 48 hours.
Range: This species is widely distributed across Europe and North America. In the United States it can be found in almost every state from the norther Rocky Mountains to the mid-Atlantic coast.

Its is most important to differentiate Conocybe apala from its look-a-likes in its own genus of Conocybe (C. arhenii, C. filaris, C. fimicola, C. rugosa, C. stercoraria, C. tenera)  as well as in the genus of Galerina (G. autumalis, G. veneata) as these mushrooms can be highly toxic. The milky white, sometimes wrinkled “Dunce cap” on a spindly stalk and the characteristic habitat described above should be used to help distinguish the White Dunce Cap from the poisonous species mentioned above.

Additionally, unexpanded caps of this species may be confused with Manure Mushrooms Bolbitius titubans and Bolbitius vitellinus. Conocybe apala can be differentiated from the latter species by the bright yellow, sticky, oval cap which turns pale buff upon maturation of the manure mushrooms.  Also the manure mushroom caps never expand, they are darker water-brown than the White Dunce Cap, and the whole mushrooms are translucent.

Some also confuse it with Psilocybe Semilanceata, The Liberty Cap.

Although the exact toxicity or safety of Conocybe apala is not known, most authors and mycological literature advise against the consumption of this species as it is thought to contain similar toxins found in other poisonous Conocybe species. These toxins are Amatoxins, and include cyclopeptide chemicals such as amanitin and amanin. The consumption of Amatoxins found in these mushrooms produces Amatoxin syndrome in six to twenty-four hours. This syndrome is characterized by violent vomiting, diarrhea, and stomach cramps followed by circulatory collapse manifested by dehydration, low blood pressure, and increased heart rate. If individuals survive the initial phase, a period of apparent recovery follows during which prior symptoms abate but insidious liver and kidney failure start to develop. This “false recovery period” last approximately two to three days and is followed by complete hepatorenal failure. Death is not frequent in sever cases. What is worse is that no antidote is available, individuals poisoned with amatoxins are provided symptomatic treatment which involves rehydration with fluid and electrolytes, complete blood dialysis, and in the most severe of cases even liver transplants.[v]