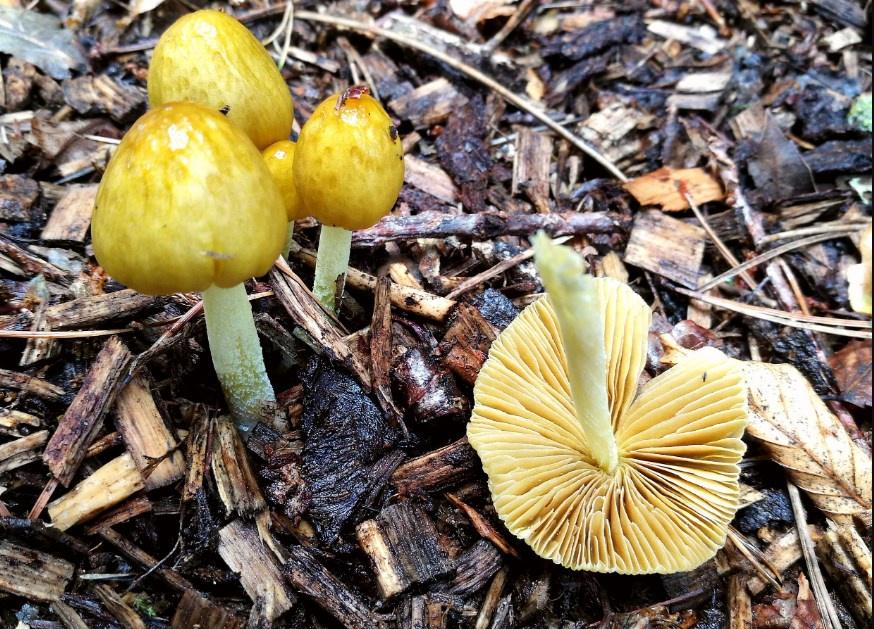 Bolbitius titubans, otherwise known as Bolbitius vitellinus, is a medium-sized mushroom with a sticky, watery yellow cap on a thin, yellow stack and cinnamon-red gills. This mushroom loves well-manured or rich, moist soil, hence its name “Bolbitius” meaning “of cow dung”. [i]

Bolbitius titubans is one of the most short-lived species of mushrooms (“ephemeral”), often living for a day or two. Despite its short life span, it still manages to undergo several morphological changes which make its appearance quite variable and accurate identification sometimes challenging.

This species of colorful mushroom was first described by the French mycologist Jean Baptiste Francois Pierre Bulliard during the late 18th century, who termed the species Agaricus titubans, no surprise there as all gilled mushrooms were placed in this genus. It was not until the 1830s that the species was reclassified and renamed Bolbitius titubans by another notable Swedish mycologist Elias Magnus Fries.

Confusion often surrounds the “proper” name of this species, is it Bolbitius titubans or is it Bolbitius vitellinus? Traditionally, these two species were thought to be separate. Mycologists originally thought that Bolbitius vitellinus was its own species on account of its thicker flesh, less striate cap, and whiter stem. However, thanks to modern research mycologists have unified and merged these once separate species. As for its “proper” naming, this follows the rules of taxonomic, binomial nomenclature which dictates that an older name take precedence over the new, hence the older Bolbitius titubans takes precedence over the new Bolbitius vitellinus.

From an etymological perspective, we mentioned that “Bolbitius” means “of cow dung”, referring to the well-manured habitat this species prefers to grow in. As for “titubans”, this means wavering or. unsteady, referring to the propensity of these mushrooms to easily lean and ultimately fall over due to their thin, fragile stalks. [ii]

As mentioned, the appearance of Bolbitius titubans is quite variable as it changes its color over a very short period, and even though the species is often commonly known as the “Yellow Fieldcap” it may not be yellow at all.

Cap: The cap of B. titubans is 2 to 6 cm in diameter. It is bell-shaped to conic, becoming broadly convex to flat, sometimes with a depressed central disc. The caps are a bright yellow initially, but soon begin turning to a dull grey color starting from the margins and often retaining a yellow center. The margins themselves are streaked, eventually becoming grooved, sometimes can even be somewhat warty. The surface is viscid and sticky, but with times it dries to a smooth and silky finish.
Flesh: The cap flesh is thin, soft, and watery yellow. The flesh splits easily from the edge.
Chemical Reactions: If potassium hydroxide (KOH) is applied to the cap flesh it turns a dark grey color.
Gills: The gills of this species are adnexed or narrowly adapt, close, soft, and fragile. They are initially yellowish, but as spores mature they take on a rusty to cinnamon-brown tinge.
Stem: The stem measures 6-12 cm in length and 2-5mm in width. It is cylindric, often with a slightly expanded base. Characteristically the stem is very fragile. Minutely hairs at the top, underneath the cap. The stem is a shiny, pale yellow color.
Spores: The spores measure 10-15 by 6-9 µm. They are somewhat ellipsoid with a truncated/flattened end having an apical pore. The spores are smooth.
Spore Print: The spore print is moderate rusty or cinnamon-brown.
Smell: No distinctive smell.
Flavor and Edibility: Whether this species is considered edible is unknown, but Bolbitius titubans is still considered inedible. Furthermore, due to its small size and thin flesh it is unlikely to be a worthwhile mushroom for foragers.
Habitat: Bolbitius titubans is a saprobic species that is typically found growing single to clustered on well-manured pastures or rotting straw. Smaller specimens can also be found growing on mulch and grassy areas. This species loves moisture, frequently appearing after rainfall, as well as sunlight.
Fruiting season: Bolbitius titubans fruits throughout the year when sufficient moisture and sunlight are available. In North America, it most commonly fruits during summer and fall months.
Range: Bolbitius titubans is a very common species that can be found throughout North America and Europe. It can be found across the continental United States from New York to California.

There are several species of Bolbitius that may easily be confused for Bolbitius titubans. Furthermore, even mycological literature oftentimes groups various Bolbitiaceae under the “umbrella” of Bolbitius titubans as there is a lack of clear ecological and/or molecular data to warrant their separation. However, there are still a few look-a-like species that can be differentiated: