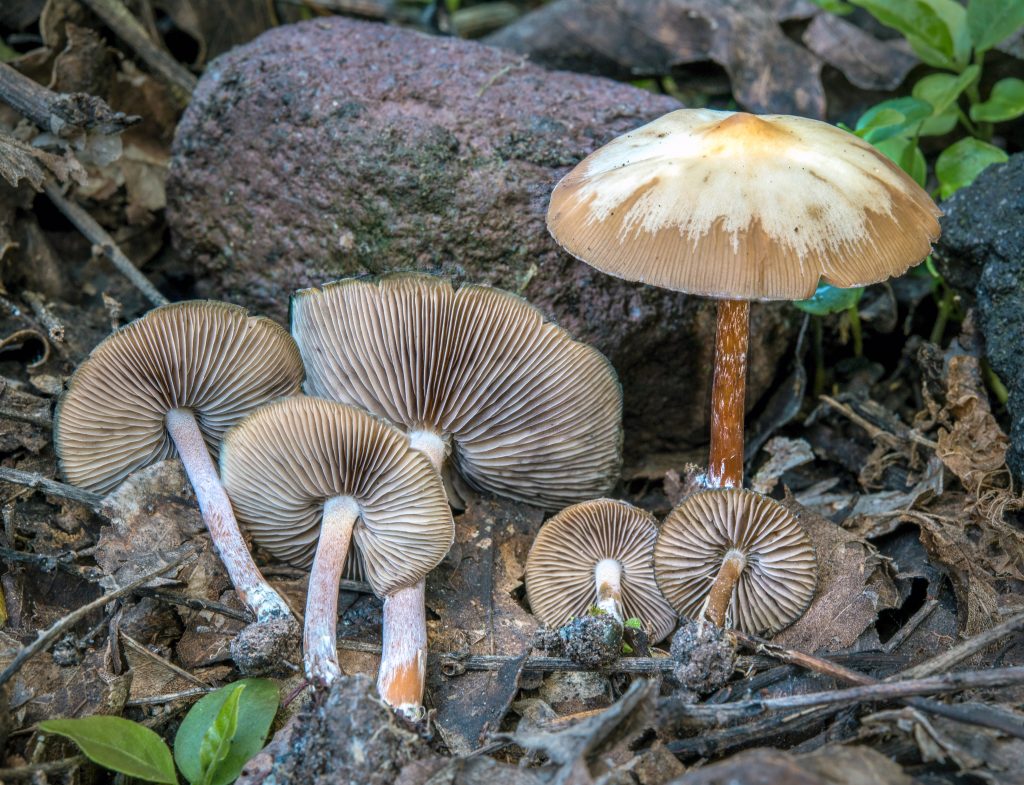 Psilocybe caerulescens[i][ii] is a psychoactive mushroom related to the famous Psilocybe cubensis. It’s sometimes called the landslide mushroom because it likes to grow in the ground in sunny, vegetation-free areas with a lot of woody debris in the soil—the devastation zone of a recent landslide is just about perfect, though the fungus can grow in other places, too.

The landslide mushroom grows mostly in South and Central America, extending north only into the southern edge of the United States. It is used for traditional religious purposes in Mexico, and its use may well be hundreds or even thousands of years old. Its recreational use is more recent and, in most jurisdictions, illegal.

While P. caerulescens is not as popular as P. cubensis, it is similar in most respects.

P. caerulescens is a small, non-descript, brownish mushroom, just as most magic mushrooms are. Identifying these species in the wild is difficult, as they not only closely resemble each other, but also several non-psychoactive species, some of them dangerously poisonous. P. caerulescens adds to the confusion by being highly variable in shape and size.

This mushroom is reddish and sticky when moist but dries to more of a yellowish color. If cut or bruised, it will turn blue to blue-black, especially in younger specimens. While the mushrooms are usually small, they can occasionally be quite large.

It’s difficult to find information on what taking P. caerulescens is like, although since this mushroom is biochemically very similar to P. cubensis, the character and quality of their highs are likely also quite similar. In general, psilocybin mushrooms usually bring euphoria, relaxation, feelings of connection, important personal insights, sensory intensification and distortion, and also some nausea—although since psilocybin tends to exaggerate whatever mental state the user is already in, debilitating anxiety is also possible. And while dangerous side effects are rare, they are possible. It’s important to follow certain basic safety practices for best results with any psychoactive mushroom.

P. caerulescens is relatively low in terms of potency, but all that means is you have to eat more to get the same effect. Some people do suggest that low-potency mushrooms are better for beginners or for microdosing.

It’s always best to err on the side of too little rather than too much, since higher doses make bad reactions more likely.

Although P. caerulescens is said to be easy to cultivate, and PF Tek will work, so it seems likely at least some other P. cubensis teks will work, too. But details are hard to come by. Colonization time is not clear.

People who want to try eating P. caerulescens have two main options, buying and growing. In some areas, it’s possible to harvest this species in the wild, but foraging for magic mushrooms should only be done by experts, because of the danger of mistakenly harvesting a dangerous look-alike. Whether buying is better than growing (or the other way around) depends on the user’s situation—including their legal situation, since in most jurisdictions, possession or use of psilocybin in any form is illegal, and penalties can be draconian.

Growing mushrooms is always cheaper on a dose-by-dose basis than buying, plus it’s a way to get a reliable supply of a species that isn’t quite as popular as some of its relatives. Growing mushrooms is a fascinating hobby that some people really enjoy. Unfortunately, if your hobby comes to the attention of police, you may find yourself charged with manufacturing an illegal drug, among other problems. And since you’ll end up having mushrooms in some stage of growth in your house for weeks or months on end, security can become a real problem.

Buying mushrooms is a more attractive option if you really only want a dose or two at a time, or if you don’t want to bother with the work of cultivation.

In either case, we must be very clear; we can’t actually encourage you to break the law. We don’t want our readers going to prison.