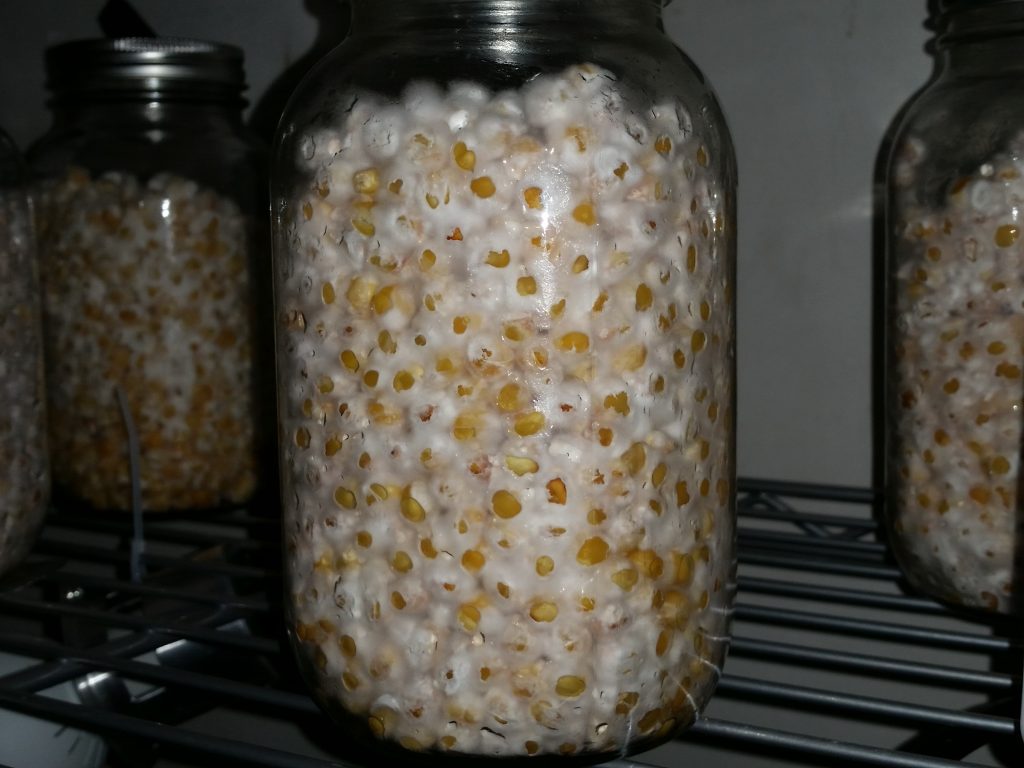 There are many ways of growing psilocybin mushrooms. Most methods involve first incubating the fungus in jars of grain and then, when the grain has been fully colonized, removing the clump of grain and mycelium from the jar and inducing it to fruit (that is, produce mushrooms) by one or another method. Popcorn tek[i][ii] is one way of doing the first stage, the grain in the jars.

Basically, if the grain in the jars is popcorn, that’s popcorn tek, though there are a few details you have to get right for best results.

Whether you use Popcorn Tek or BRF (brown rice flour) or Uncle Ben’s tek, or some other thing really only has to do with how you set up the jars. The other steps of mushroom cultivation, from inoculation, to incubation, to birthing, to fruiting, and so forth are going to be the same either way. For that reason, this article is only going to describe how to set up the jars. We have covered various options for the other steps in other articles.

It’s worth noting that in most jurisdictions, cultivating psilocybin mushrooms is extremely illegal. Know what the law is in your area, and do not get sent to prison.

Note that in the following instructions, we assume that you have access to an ordinary kitchen and its equipment and supplies—that’s why we don’t list “a kitchen sink” among the materials needed, though really having a kitchen sink is useful for this tek. We’re also assuming at least some prior knowledge of mushroom growth. But if you don’t have that knowledge, if you don’t know what “mycelium” is, for example, there’s no shame in that. Just do a little more reading and then come back here.

Note that you can make larger batches—to fill six jars, use four pounds of popcorn, and so on. Also, please note that this is PLAIN popcorn, not microwaveable popcorn (which usually has butter flavoring already included). Finally, make sure your pressure-cooker is working properly, since a cooker with a blocked safety vent, for example, could be extremely dangerous.

As we explained earlier, we’re not going into a lot of detail here, just touching on what the next steps will be.

You can inoculate the jars with either spores or liquid culture. In either case, you’re going to inject the material through the micropore tape using a sterilized needle. The jars then need a warm place to incubate—the temperature depends on the type of mushroom you’re growing. Shaking the jars every week or so speeds colonization, but shaking them too often will slow colonization instead. The growing mycelium should be white. Green or other colors indicate contamination. Colonization time will depend on the species and strain you are growing, but it’s likely to be about two weeks.

When the jars are fully colonized, it’s time to move on to fruiting. You may be able to induce the fungus to fruit in the jar, though few people do that. The colonized popcorn will form a solid cake or block, so you can simply slide the cake out, put it into fruiting condition (there are various teks for that) and fruit it in a shotgun fruiting chamber. Alternatively, you can break up the cake and use it to inoculate a tub-full of a bulk substrate, such as horse dung.