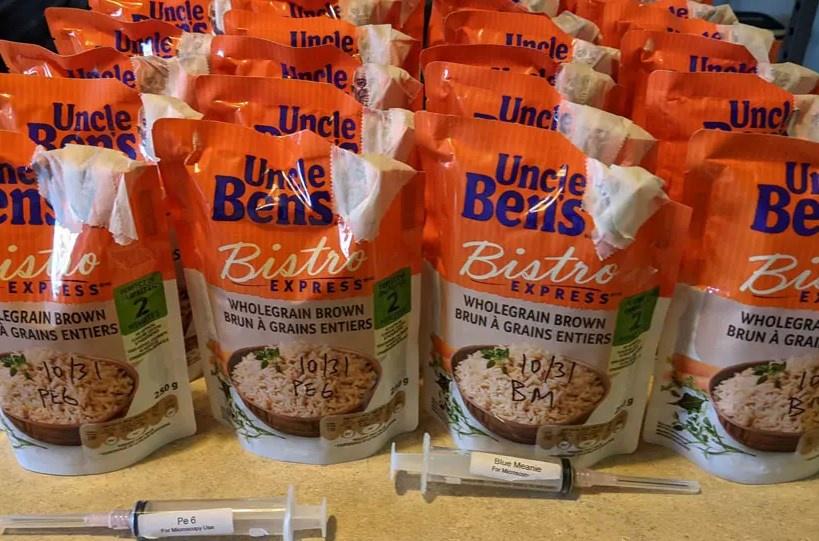 The Uncle Ben’s Tek[i] is not a technique belonging to Uncle Ben (Now known as Ben’s Original). It’s a mushroom-growing method involving pre-cooked rice sold in plastic pouches—Uncle Ben’s being one popular brand. Some would-be growers get confused about exactly what this tek requires, so we need to be very clear; this is PRE-COOKED rice, the kind where you could simply cut open the bag and eat it cold with a spoon, if you wanted to. Instant rice, which you do need to cook, it just cooks very quickly, is a very different product and not at all what this tek requires.

Basically, Uncle Ben’s Tek (also sometimes called Spiderman Tek, since “Uncle Ben” is the name of a character from the Spiderman comics) is in some ways a variation on the famous PF Tek—both feature an initial colonization period on brown rice in small containers before a separate fruiting stage. The distinctive feature of Uncle Ben’s is that you don’t have to mix your own grain substrate or prepare your own jars. The rice company hydrates and cooks the rice, sterilizing it in the process, and then seals it in sterile pouches—all you need to do is inoculate the bags.

Why Do Uncle Ben’s Tek?

The most obvious advantage of Uncle Ben’s is convenience—you don’t have to prepare jars. But there are also disadvantages to the tek, which has a surprising number of haters[ii]. So to give Uncle Ben’s a fair hearing, it’s necessary to look at both sides. The arguments and counter-arguments for and against.

So supporters usually talk up Uncle Ben’s ease and simplicity, suggesting it particularly to beginners who might not be ready for all the intricate steps of a more advanced tek. To this, haters respond that PF Tek is not that difficult, requires only equipment that that is readily available at low cost, and is substantially more reliable. Pre-cooked rice bags are also difficult to see into (many brands have a small window at the bottom of the bag but are otherwise opaque), so it’s possible for a grower to spend a lot of time nurturing a bag only to discover afterward that it is contaminated or just plain dead. Uncle Ben’s isn’t even cheaper on a per-gram-of-mushroom basis, because the equipment for PF Tek is re-usable and brown rice is very cheap in bulk—plus there’s all that plastic waste at the end. Those pouches aren’t recyclable.

Why, the haters say, encourage beginners to use a kinda-effective, hit-or-miss tek when they are fully capable of something way better?

Simple; not everybody wants to buy large bags of rice flour and vermiculite and dozens of canning jars and possibly a pressure-cooker (lots of people already own one, but not everybody does) without knowing if they’re even going to like mushroom cultivation.

Plus, many Uncle Ben’s enthusiasts say they get excellent results with the method.

So, there you have it. The real reason to use Uncle Ben’s Tek is to find out whether you like growing mushrooms before you invest in bulk supplies.

Note that the above materials list and the following instructions do not include the bulk substrate fruiting stage—we’ve covered that already in a separate article. Also, when deciding how many bags to do, check how big the bags are (it will say so on the front) and how much spawn you’ll need for the second-stage method you’ll be using.

Colonization time depends on what strain you’re growing, but expect it to take a little longer than with PF Tek because of the cooler incubation conditions.

Yield varies greatly, with some growers reporting huge harvests and others getting nothing at all. Because Uncle Ben’s Tek is so simple, there is a lot that can’t be precisely controlled—so that’s one reason why yield is hard to predict. The other reason is that Uncle Ben’s can be used for almost any Psilocybin cubensis strain, and possibly other species, plus the method can be paired with any bulk substrate method, and all of those choices will influence yield.