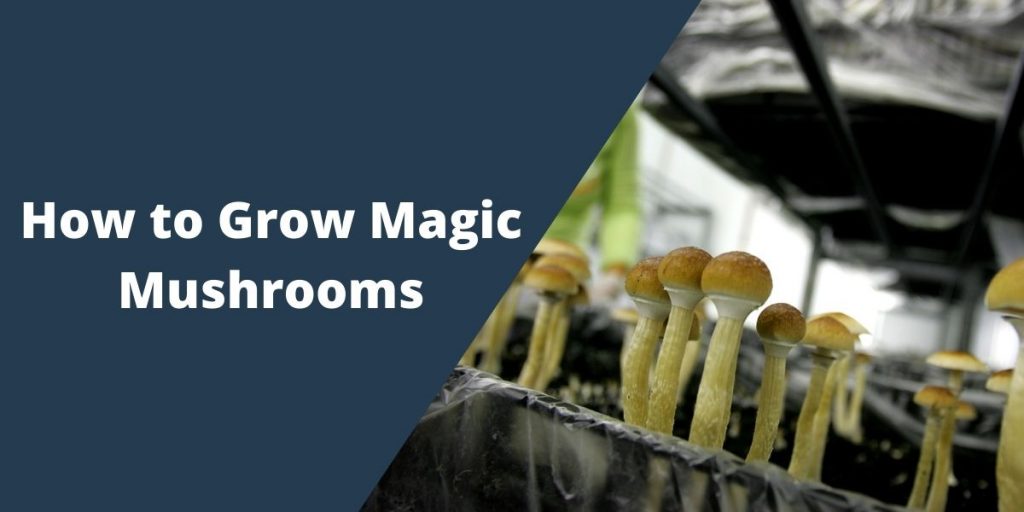 Ever wanted to grow magic mushrooms? You’re not alone. Growing hallucinogenic mushrooms is a fascinating hobby as well as a practical way to build up a good supply[i]. In most jurisdictions, growing shrooms is illegal, but there are exceptions. It’s important to find out exactly what the law is in your area before beginning.

Terms like “magic mushrooms” and “shrooms” can mean a number of things, from Psilocybe cubensis specifically, to any any all hallucinogenic mushrooms, including some in the Amanita genus that don’t contain psilocybin but instead deliver moscimol, a very different kind of hallucinogen. Here, we’re talking about psilocybin-producing mushrooms as a group. We’ll start with how to grow P. cubensis, since it is so popular, but then we’ll talk about how some of the others differ.

Here’s a little tutorial, a kind of introduction to fungi, just to make sure we’re all on the same page about how mushrooms grow.

Fungi are their own kingdom, separate from both plants and animals. While they were considered plants for years (and are still called plants, erroneously, by some), they actually have more in common with animals. For example, they must eat to live, just like us. The way they reproduce isn’t much like what plants or animals do, though—fungi sex is a fascinating topic, and we have space here only to scratch the surface.

Not all fungi produce the large fruiting bodies commonly called mushrooms. We’ll focus on those that do.

When a spore germinates, it sends out threads, called hyphae (singular: “hypha”) that grow and eat. Each hypha is a single long, skinny cell with a single nucleus. When a hypha meets the hypha of a compatible fungus’ hypha, they mate by fusing their trips. The new individual that grows from that point has two nuclei per cell, one from each parent. It feeds and grows, forming a network of hyphae called a mycelium. When conditions are right, little knots of tissue called primordia (singular: “primordium”) or pins form on the mycelium. These pins grow into mushrooms, eventually producing spores of their own. Just before a cell forms spores, its two nuclei merge, so that each spore once again has a single nucleus, a mixture of both its parents.

A hobbyist mushroom grower doesn’t need to know any of that, but it will help avoid confusion, and will be necessary if you want to learn advanced techniques.

The simplest way to grow mushrooms is to buy a grow kit, basically a block of pre-inocculated substrate with instructions. Grow-kits are available for many mushroom species, both culinary and hallucinogenic. Quality can vary, depending on the brand, so it’s a good idea to get a recommendation from an experienced grower before picking one to buy.

Even without a kit, growing magic mushrooms is pretty simple, but detailed instructions can seem overwhelming because there are a lot of steps and a lot of options to choose among. So what follows is a kind of “growing 101” for beginners.

Growing P. cubensis at home indoors is not difficult. Most strains will yield a good harvest by almost any growing method, provided that method is followed fairly exactly (yes, it’s possible to develop new methods, but novices who try to make it up as they go along often end up without a harvest). Perhaps the simplest and most reliable version is PF Tek, named for its inventor, a man who went by the nickname, Psilocybe Fanaticus, or PF for short.

Here is a quick summary:

Fill a wide-mouth glass jar with appropriate fungi-food, inoculate with spores, then wait. Once the substrate in the jar is fully colonized by fungus, “birth” it (that is, slide the colonized substrate out of the jar—the mycelium will hold it together in a solid cake), and then put it in a grow chamber where the temperature, humidity, and fresh air access can all be controlled. Soon, the cake should start producing mushrooms. After harvest, trigger another flush with more water. Repeat as many times as possible.

Throughout, it is critically important to keep everything absolutely clean in order to prevent colonization by mold or bacteria. Yes, mushrooms grow wild in the non-sterile big, wide world all the time, but think of these contaminants as weeds in the garden—except it’s impossible to remove them once they take hold. For a good harvest, then, it’s important to keep the weeds out from the beginning.

What Do You Need to Grow Mushrooms?

Before you start, assemble the following materials:

After the harvest, you’re going to want to dry most of your mushrooms, since they don’t keep long fresh. It’s best to use a Food Dehydrator. While you’re gathering materials for the grow, you might as well gather materials for drying, too—but that’s the subject of a different article.

Now that you have all your equipment together, it’s time to get started[ii].

PF Tek is popular, despite being a little labor-intensive, because it almost always yields good results. But growers who want to take a chance and maybe get larger harvests often try Monotub Tek[iii] instead. Rather than a cake placed in the bottom of a fruiting chamber, this tek involves filling an entire tub with a substrate such as a sterilized blend of horse dung, coco coir, and water. The bulk substrate is then inoculated with “spawn,” that is, a bag of fully colonized grain. It’s possible to buy spawn, or you can make your own.

There are other, less popular methods, too. Some strains can even be grown in outdoor gardens.

P.cubensis is not the only magic mushroom that can be cultivated, it’s just the best-known and one of the easiest. Some of the others, such as Panaeolus cyanescens and Panaeolus tropicalis, can be grown almost the same way the more familiar cubes can, except these species have little to no tolerance for mistakes[iv]. Everything must be done exactly right or there will be no harvest.

Both Psilocybe azurescens and P. cyanescens can be grown by a method that resembles a hybrid of PF and Monotub Tek[v]. Sterilize and inoculate jars as in PF Tek, except use a substrate of hardwood sawdust and either wheat or rice bran. A layer of vermiculite on top discourages contamination. After birthing the cakes, break them up and place them in a monotub underneath a layer of wet cardboard. Once the cardboard is colonized, add a layer of alder or maple woodchips. Once these are colonized, lower the temperature to around 50° F to trigger fruiting.

P.mexicana, which has several subspecies sometimes discussed as separate species, can produce truffles, underground structures technically known as sclerota. These, too, contain psilocybin, and can be grown in jars on a variety of grain substrates—rye berries are the best, but these must be pre-soaked in a mixture of water, coffee, and gypsum, then air-dried before use. Truffles will be ready to harvest from the jars in anywhere from two to six months, or sometimes more. The colonized jars can also be used as grain spawn to inoculate monotubs of manure mix in order to grow mushrooms[vi].

P.subaeruginosa is considered virtually impossible to grow indoors, but can be cultivated outdoors in garden beds on wood chips or cardboard[vii]. The method might take a year or more before the first harvest, but is relatively low-maintenance.

Is It Legal to Grow Magic Mushrooms?

What Is the Easiest Magic Mushroom to Grow?

Reportedly, P. cubensis is easiest. Some of its strains are easier than others, but most are very accommodating.

How Long Does It Take to Grow Magic Mushrooms?

Growing time depends on the species and the strain—and, to some extent, on the method. With P. cubensis, it’s usually between one and two months.

How Long Do Spore Syringes Last?

Spore syringes can remain potent for up to two years, if properly cared for.

Do Magic Mushrooms Have Seeds?

[vii]    Bumbleblock (2019). How Would You Go About Growing Psilocybe subaeruginosa?