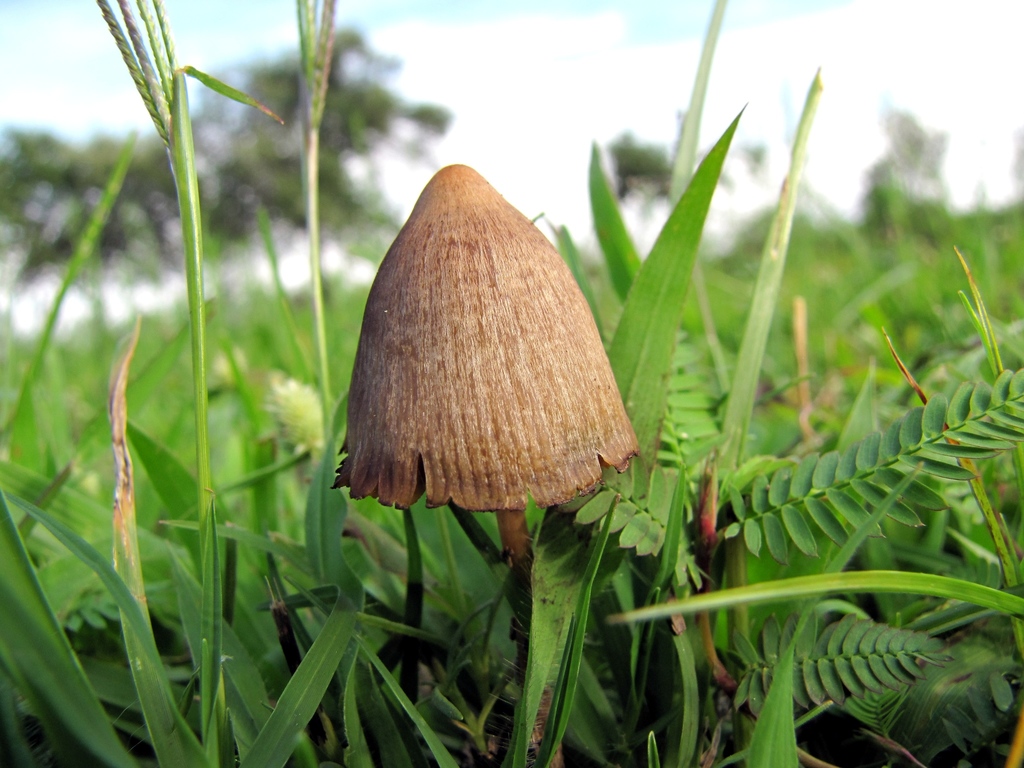 Psilocybe mexicana, also known as the Mexican liberty cap, is a moderately-to-highly psychoactive mushroom from the Mesoamerican region, belonging to the genus of Psilocybe. Psilocybe mexicana is a saprophytic, hygrophanous, sclerotium-forming mushroom found mainly in grasslands and pastures rich in manure.

Psilocybe mexicana has an interesting background. From historical and archeological evidence, it is known that these species of mushroom were used by the indigenous cultures of Central America for ceremonial practices for over 2,000 years. In the Aztec culture, for example, P. mexicana was esteemed as a holy sacrament and termed “teonanacatl” or God’s flesh. Unfortunately, the early exploratory period of the Mesoamericas during the sixteenth century by Spanish conquistadors accompanied by missionaries forced such mushroom ceremonies into secrecy, as misguided Catholic missionaries, in carving out their campaign against “pagan idolatry”, persecuted those who were caught using them. However, several centuries later the notable French mycologist Roger Heim journeyed to Mexico, during which time he rediscovered and characterized  Psilocybe mexicana and brought back samples for cultivation under laboratory conditions. It was from these lab-grown samples that the notable Swiss chemist Dr. Albert Hofmann first isolated and named the psychoactive compounds, psilocybin, and psilocin in 1958.[i]

Cap: The cap of this species is 0.5 to 3 centimeters in diameter. While young, it is conic to campanulate to subumbonate in shape, turning convex at maturity, often with a small raised area in the middle (umbo). The surface is viscid to smooth when moist and has striations from the margin glad way to the disc. The margin may at times be decorated with fine fibrous. As mentioned, P. Mexicana is a hygrophanous mushroom meaning it changes its color as it ages, thus it is brownish to deep orangish-brown, fading in drying to yellow, becoming opaque often with bluish or greenish tones from age or when injured.
Gills: Gills are adnate to adnexed, sometimes sinuate. Pale grey to dark purplish brown with spore maturity, often with whitish edges
Stem: Stem is 4 to 12.5 centimeters long by 1 to 3 millimeters thick. It narrows towards the base, is smooth, and hollow. While young, the stem is straw yellow to brownish in color, darkening with age or when damaged. There may also be a thinly fibrillose partial veil remnant on the upper region of the stem.
Spore: Spores of this species are dark purplish-brown to blackish purple-brown. Ellipsoid to subellipsoid in side view, and subrhomboid in face view. The size of the spores is 8-9.9 by 5.5-7.7 micrometers.
Spore Print: The spore print of P. Mexicana is dark purple-brown.
Odor and Taste: The smell and taste of this species are said to be farinaceous, which means resembling flour.
Edibility: P. Mexicana is edible but produces psychoactive effects, thus caution is advised.
Habitat: This species grows alone or in small groups in grass fields, meadows, and field-forest interfaces that are often grazed by sheep, horses cattle, yaks, water buffalo, bison, lamas, or other domesticated animals and are thus rich in manure, which this species needs a large amount of to develop. Additionally for optimal growth, P. Mexicana requires a wet climate(800-3000 millimeters of rainfall) and as such is most commonly found at or below elevations of 1000-1800 meters above sea level in limestone regions.
Sclerotia: Somewhat uniquely, P. Mexicana can form a sclerotium, which is a dry, hardened, nutlike structure that represents a dormant stage of the mushroom. Sclerotium-forming mushrooms, such as this one, use this dormant stage as a protective mechanism to survive environmental disasters such as recurring fires that tend to sweep over grassland environments.
Range: P. Mexicana is endemic to Central and South America and can be found growing from May through October in subtropical regions of Mexico, Guatemala, Colombia, Argentina, Chile, and Costa Rica.

Psilocybe mexicana looks a lot like there other species form the genus of Psilocybe, such as P. cubensis, P. azurescens, P. semilanceata, P. cyanescens, and P. baeocystis. Although identifying the genus of Psilocybe by its golden brown color and the propensity to become blue mottled when bruised may be easy, differentiating one species from the next can be challenging. For example, manure deposits in grasslands are loved both by Psilocybe mexicana and Psilocybe cubensis. Differentiation of different species relies mainly on morphological and microscopic features, here is an example of a side-by-side comparison of the aforementioned species.

As it is clearly visible differentiating different species can pose a problem, as such mycophiles should pay careful attention to all of the details that make up a mushrooms identification, and those who are beginners should have experienced mycophiles with them.

There is no exact value on what quantity psychoactive chemicals are present in this mushroom. In their descriptions, Heim and Hoffman reported 0.25% psilocybin and 0.15% psilocin we found in P. Mexicana. Which makes this species relatively weaker in comparison to the other Psilocybe species such as P. cubensis and P. azurescens.  However, it should be clearly noted that the potency of any given mushroom is dependent on the state of the mushroom(raw vs dried), mode of consumption, individual physiologic sensitivity as well as on the methods and the environment of growth.

For example Jochen Gartz, in his book on “Magic Mushrooms Around the World” shows this variability in potency. He states that levels of psilocybin levels in Psilocybe mexicana are comparable to those found in Inocybe aeruginascens, and goes on to provide psilocybin content percentages of five different dried samples of Inocybe aeruginascens from various locations.

As such potency can be highly variable and it is best to err on the side of caution and to always start with small amounts, as you can always take more, but you can’t take less!

Popular methods of consumption for Psilocybe mexicana include Lemon Tek and Shroom Tea.

After the ingestion, of P. mexicana its physical and mental effects appear within 20-30 minutes ad last on average 6 to 8 hours, but they may persist for a maximum of 12 to 24 hours. After ingestion the chemical psilocybin is rapidly dephosphorylated to the more psychoactive chemical psilocin. Unfortunately, the mechanisms by which these chemicals produce their effects are unclear. It is thought that they may alter brain concentrations of serotonin and have variable degrees of sympathomimetic effects.

The central nervous system (CNS) effects of P. mexicana are quite similar to those of lysergic acid diethylamide (LSD), but much less potent and of shorter duration. These central nervous system effects can include visual hallucinations with vivid colors, kaleidoscopic phenomena, flashes of light, synesthesia(“seeing sounds”), confusion, disorientation, inappropriate behavior, and emotional lability. Although most individuals describe these CNS effects as pleasurable, others may experience dysphoric reactions that can be frightening and result in severe panic, psychosis, or depression. Physical signs can include pupillary dilation, hyperreflexia, increased heart rate, increased blood pressure, and dry mouth. Other less common effects can include altered sensations, facial flushing, unmotivated laughter, incoherent or inappropriate speech, and drowsiness along with nausea and vomiting. [v]

Under normal circumstances, the effects following ingestion of P. mexicana are not life-threatening when taken in moderation, but as always “Dose Makes the Poison” therefore overdose and death can be seen if excessive amounts are consumed.[vi]

Growing magic mushrooms or buying mature Psilocybe mushrooms is illegal everywhere in the United States. However, individuals may buy P. mexicana spores and sclerotia for microscopy, taxonomy, and general “research” purposes in certain states of the United States. As such before you decide to grow or buy any shrooms it is best to check your local laws.

P. mexicana was first cultivated during the late 1950s by Roger Heim and his colleagues in France. Overall, this species is not a difficult species to grow and has the ability to easily produce large mushrooms. However, most home growers today prefer to produce sclerotia rather than adults mushrooms, for the reasons of its legality and lower potency per dry weight compared to the mushrooms themselves.

P. Mexicana needs to be grown in dark, nutrient-rich conditions such as in lolium (rye grass) seeds in order to produce sclerotia, usually after three to twelve weeks. If cultures are exposed to daylight and less nutrient rich growth media, adults mushrooms will grow instead within a week or two.

Therefore, for individuals who wish to possess adults mushrooms, although ILLEGAL, can purchase P. mexicana spores which is legal in most states in the US and grow them on their own. However, if they wish to possess sclerotia they have the option of purchasing or cultivating on their own. Lastly, before deciding either on buying or growing this species be sure to familiarize yourself on the specifics of local law regarding Psilocybe mushrooms.

[iv]      Gartz, J. (2014). Magic mushrooms around the world a scientific journey across cultures and time ; the case for challenging research and Value Systems. Arnshaugk.