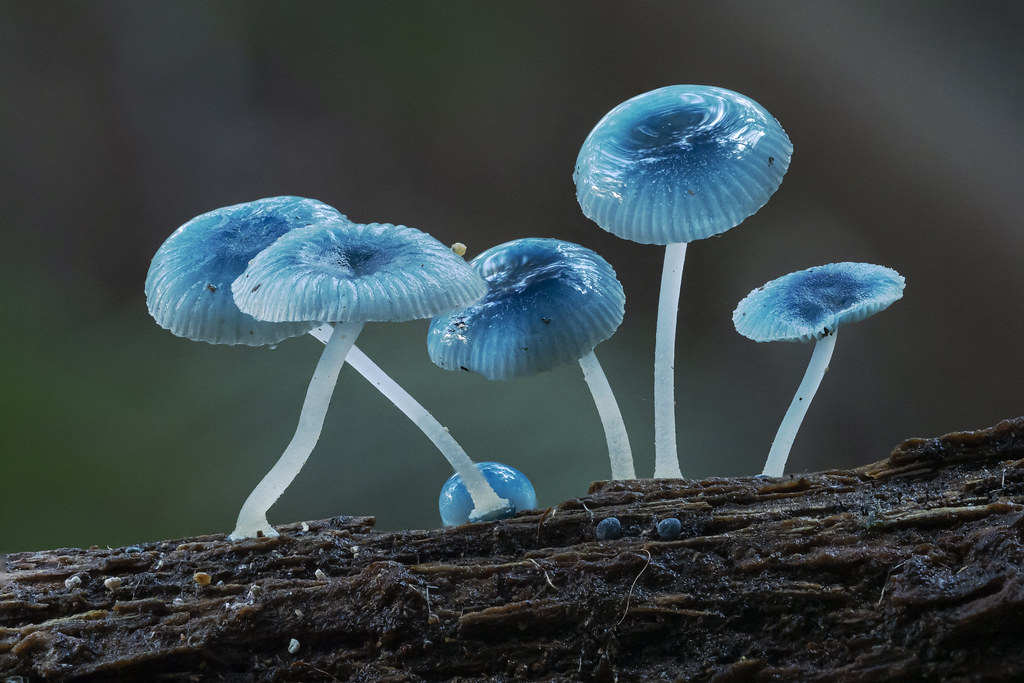 Mycena interrupta, known to most as the pixie’s parasol, is a relatively uncommon saprotrophic mushroom with a unique mycogeographical distribution.[i]

Cap: The cap is up to 16 to 20 millimeters in diameter and approximately 4 millimeters high. It is globose when young, becoming convex with a slightly depressed center as they age. The surface of the cap is shiny, gelatinous, translucent, and striate. The color of the cap is cyan-blue with a slightly darker center.
Gills: The gills are adnate to free, and are moderately close to distant. In color, the gills are white with blue margins. There may also be one or two series of lamellulae.
Stem: The stem is 20 to 22 millimeters long and 2 to 3 millimeters in diameter. It is cylindrical in shape; translucent white, dry, and often has a pruinose/tufted surface mainly at the base. The stem is attached to a wood substrate by a bluish basal disc that often fades to white.
Spores: The spores of M. interrupta are white, smooth, ellipsoid, or rarely subglobose; with dimensions of 8–12 × 5.5–9 micrometers.
Spore Print: The spore print of this species is white.
Edibility: Some members of the genus Mycena are edible, however, according to some mycologists they may also contain currently unidentified toxins. As such, the genus of Mycena including M. interrupta is considered inedible.
Habitat: M. interrupta is saprotrophic, growing gregariously, or occasionally solitarily, on decomposing, damp forest litter, usually on eucalypt logs or stumps.
Range: In Australia and New Zealand M. interrupta is found Victoria, Tasmania, New South Wales, South Australia, and Queensland. More specifically from Kangaroo Island and Mount Lofty Ranges in South Australia, through to southern Queensland, where its distribution is limited to Lamington National Park, and throughout Tasmania, as well as the Glenelg River region of south-eastern South Australia. This species is also found in South America and Pacific Oceania, chiefly Chile and New Caledonia.[iii] [iv]

Mycena interrupta is easily recognized and is does not have any look-alikes, because to date it is the only blue fungus with lamellae known to grow on wood in Australia.[v] One possible yet uncommon species of mushrooms that could rarely be confused are the blue-colored Pinkgills of the Entoloma species which have a pink spore print and are not saprotrophic, meaning they do not grow on dead wood.[vi]

No toxins have been found in the genus of Mycena. However, some mycologists believe that certain Mycena species may contain psilocybin or psilocin, despite none being found with biochemical studies, because they demonstrate a “bluing reaction”. This reaction is common to psilocybin-containing mushrooms and defines a “bluing” change that occurs in their flesh when bruised or damaged. However, this is only anecdotal evidence and has not been confirmed scientifically.