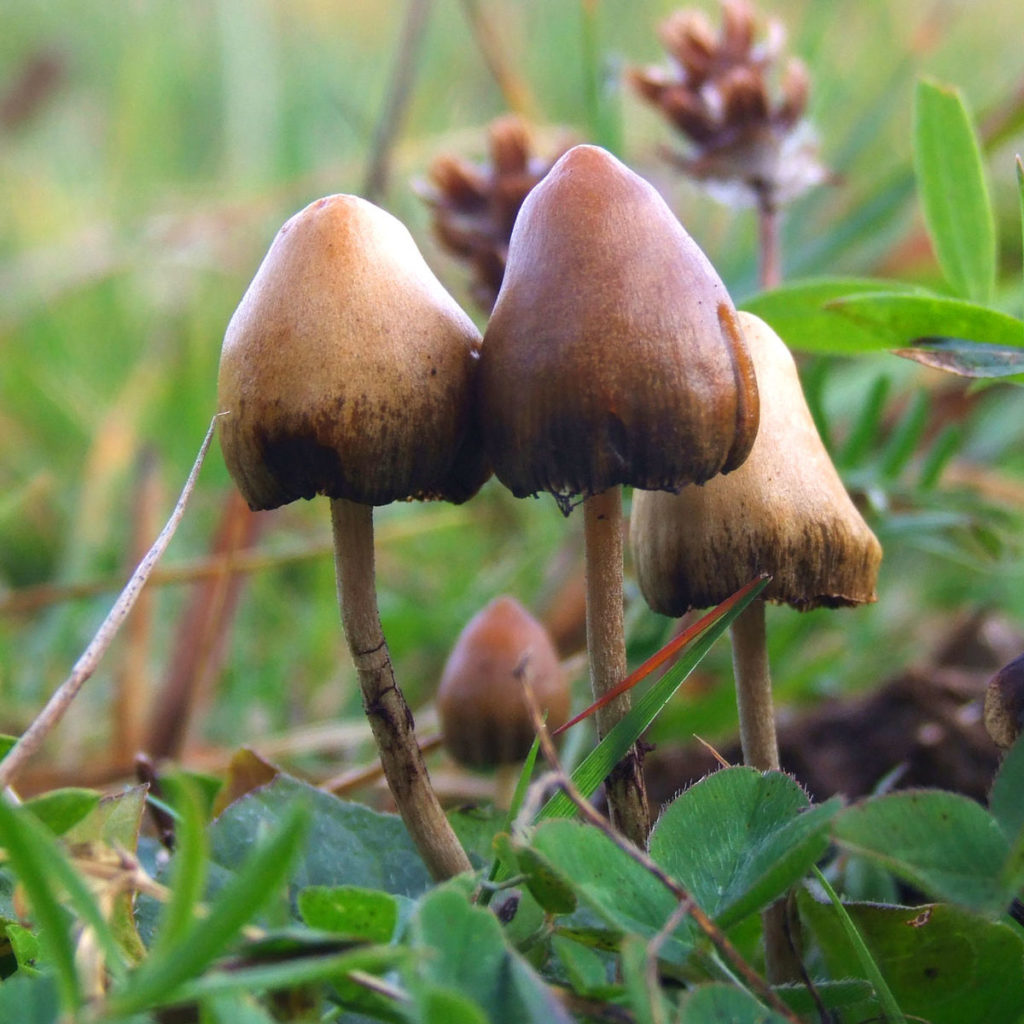 In the USA Psilocybe semilanceata is known as Liberty Cap, in the UK it is commonly known as a Magic Mushroom. The genus Psilocybe means smooth head, and this refers to the smooth and scale-less cap. Semi- refers to half and -lanceata means spear-shaped; this is in reference to the appearance of the spear-like shape of the mushroom.

Cap: From 0.2 to 2cm in diameter; cream in color but when wet it is a yellow-brown with olive tinge; a central dimple or bump is on top and furrows that appear more pronounced with age. The cap changes color depending on moisture retention. Bell-shaped, conical cap.
Gills: Greenish-grey turning purple-black or dark grey with spore maturity; Cystidia appear on the surface of the gill. The gills are narrow and quite crowded.
Stem: 2 to 3mm in diameter; 4 to 10 cm in height. Slender, wavy and white or cream; long in comparison to the capsize. Fibrous, wavy and may appear blue or purple tinge at the base. A partial veil that deteriorates quickly.
Smell: Musty; strong and earthy.
Taste: Strong and earthy.
Spores: Smooth and ellipsoidal.
Spore color: Dark purple-brown.
Edibility: Not edible due to hallucinogenic properties and side-effects. Those that eat it describe it as gritty or chalky.
Habitat: Pasture; parkland and grasslands, including lawns, paths and roadsides. Likes cool, damp areas, found in lower sections of fields and meadows. Found growing in temperate areas in the Northern hemisphere including Europe, commonly the UK and Ireland. Sometimes seen in temperate regions of the Southern hemisphere. It does not grow on dung, but likes to grow on dung fertilized areas.
Season: In the USA it is found in Autumn.
Phylum: Basidiomycota; Class: Agaricomycetes; Order: Agaricales; Family: Hymenogastraceae; Genus: Psilocybe and Species: Semilanceata.

Psilocybe Semilanceata as a Hallucinogenic

Psilocybe semilanceata contains a cocktail of psychoactive ingredients, in particular psilocybin which is the main active ingredient found in the fruit. The psychedelic experiences are seen whether the mushroom is eaten dry, fresh, in powdered form or added to food; they are comparable to LSD.

It is well established that the psychedelic in Psilocybe semilanceata is psilocybin. Psilocybin (and other serotonin 2A agonists) – classic psychedelics have been used for centuries within indigenous cultures; typically, within a sacramental context. For Indians Psilocybe semilanceata is known as a sacred mushroom; historically, it is considered that it can project them on a religious path to the spirit world. Despite being illegal in many countries, there have been a number of studies looking at the medicinal benefits of this fungus. The scientific evidence will be presented here with regard to the potential for psilocybin to treat a number of behavioral and psychiatric disorders including, alcohol addiction, depression, headaches and obsessive-compulsive disorder (OCD). This evidence by no means condones the use of Psilocybe semilanceata but deserves to be highlighted as has been reviewed in a recent scientific publication [1.]. Do not self-administer psilocybin or Psilocybe semilanceata for medicinal or recreational purposes. Always seek medical advice.

Nine patients were administered psilocybin in a controlled clinical environment. It was safely used; one patient had transient hypertension. Several patients reported that they had acute reductions in their core OCD symptoms [2.], this is promising although, not affirmative and may give credence to future studies observing the effects and mechanisms.

Psilocybin was reportedly effective for both prophylactic and acute treatment of cluster headache and migraines. The results were subjective opinions from patients with treatment-resistant migraines or cluster headaches who are exploring alternative options [3.].

Patients with treatment-resistant depression were administered psilocybin to determine its efficacy in open-label trials. Limited conclusions can be drawn about treatment efficacy from this type of trial; however, tolerability was described as good, and there were rapid symptom improvements which remained significant for 6 months post-treatment. In this regard, psilocybin may be a promising treatment for unresponsive depression, and future studies should be performed in double-blind randomized trials [4.].

Patients with cancer often develop depression and anxiety. A study administering psilocybin to cancer patients with life-threatening diagnoses, observed high-doses were able to improve mood, attitudes and behaviors. These were both self-reported changes clinician-based and from community observers [5.].

Psilocybin, in combination with cognitive behavioral therapy (CBT) was provided for patients to observe the effects on smoking cessation. The results showed that psilocybin is able to promote long term smoking cessation in 60% of individuals still abstaining from smoking [6.].

A study involving ten volunteers with alcohol dependency showed that abstinence from alcohol increased and cravings decreased following oral administration of psilocybin. The psilocybin was administered in line with therapy; however, therapy alone did not have an effect. There were no significant adverse effects that were treatment-related in this cohort of patients [7.].

Potential methods of consumption for Psilocybe semilanceata include Lemon Tek and Shroom Tea.

The Psilocybe semilanceata contains a toxin called psilocybin, responsible for the hallucinative properties. This can also cause vomiting, stomach pains and anxiety attacks. In addition, tachycardia, increased blood pressure and heart attacks have also been reported. There is the potential for psychotic states and seizures from ingesting Psilocybe semilanceata.