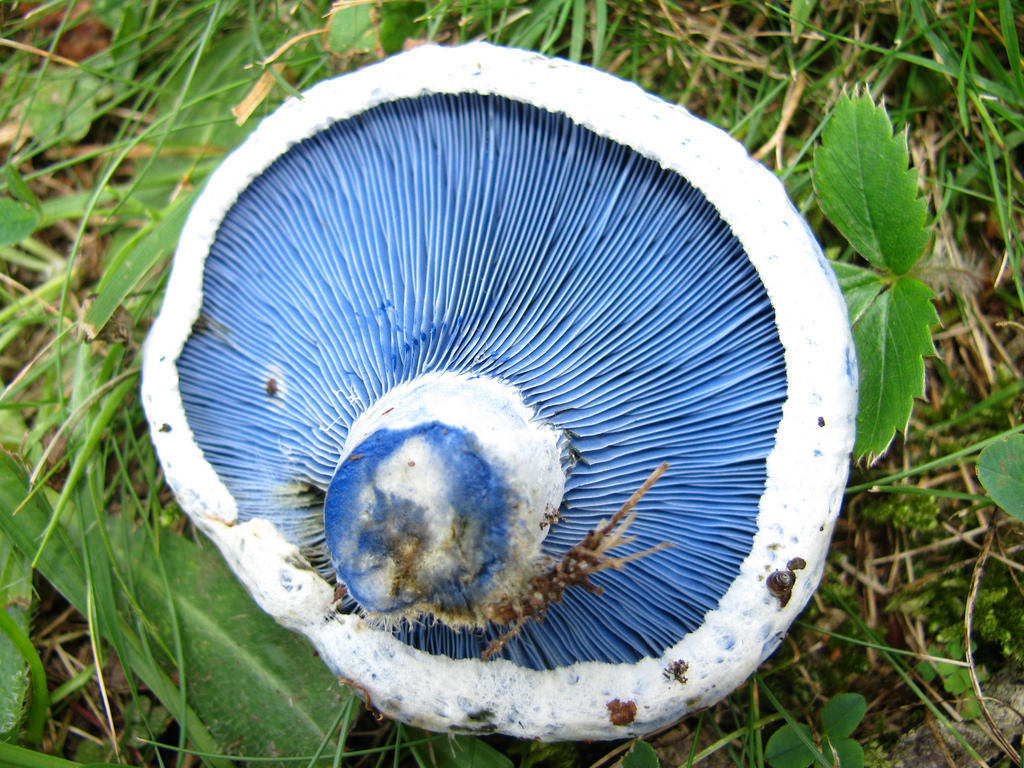 The indigo milk cap[i], sometimes simply called the indigo mushroom,  is a strikingly beautiful species with a blue fruiting body. It belongs to a group of fungi that ooze latex when sliced—in some species the latex is white and does resemble milk, but for the indigo the latex is, well, indigo. The Indigo Milk Cap is also known as Lactarius indigo and sometimes The Blue Milk Mushroom.

Indigo milk cap is edible, and its taste is generally described as “not bad,” more of a novelty (because of the color) than a delicacy[ii]. It’s not common, but it is wide-spread.

This is not one of the famously medicinal mushrooms. It’s not part of any well-known healing traditions, and it’s not widely sold as a supplement (or for anything else). However, some preliminary research suggests it may have medicinal potential[iii].

Cap: Medium-sized, initially dome-shaped but becoming flat or vase-like with age. Blue, sometimes with darker-blue rings, sometimes with brownish patches when old, can bruise green. Dried specimens turn silvery or grayish blue. Sticky or slimy to the touch when fresh. The interior flesh is initially whitish but turns blue when exposed, then, slowly, greenish.
Gills: Either attached to the stem or running slightly down it. Usually blue, but may be a different shade than the cap. Becomes yellowish with age. Stains green. If sliced, yields a few small drops of an initially blue fluid that becomes dark green when exposed to the air.
Stem: Short, of medium thickness, usually with shallow pits like potholes. Slimy when young. Hard and sometimes hollow. Also blue.
Smell: Nothing distinctive for ID purposes.
Taste: Usually mild, but may be slightly acrid.
Spores: Broadly ellipsoid with tiny lumps and lines.
Spore color: Cream-colored
Edibility: Edible
Habitat: Throughout most of North America, in many different habitat types. Lives symbiotically in mycorrhizal associations with oaks and pines. May fruit singly or in groups from the ground.

Aside from the color, indigo milk caps look like very classically mushroomy mushroom, being gilled with a roughly parasol-like shape[iv]. However, microscopically and biochemically, they don’t resemble most other fungi, not even most other gilled fungi[v].

A careful, well-informed mycophile will not mistake the indigo for any other species, however someone who is not careful could end up in real trouble.

The problem is that there are few enough blue mushrooms that it’s easy for a beginner to remember only the color and get mixed up. “Hey, look, it’s a blue mushroom! I’ve never seen one before, isn’t this that indigo-cap thing? It’s edible, right?” But not all blue mushrooms are indigo milk caps, and some of the others, notably some of the corts, are dangerous. There are corts that can take almost two weeks before causing symptoms, and most of those who experience symptoms die[vi].

In fact, the indigo milk cap is the only all-blue (or nearly all-blue) species with blue milk. The milk might be minimal—other milk caps species yield a stronger flow—but it is there and it is blue.

Two other Lactarius species are all-blue when young, though they become brownish or yellowish later. L. chelidonium and L. paradoxus also don’t have blue milk; their milk is yellow and brown, respectively.

However, it’s possible that in the future the indigo milk cap, L. indigo, will have lots of look-alikes. That’s because the species as currently described is so variable and wide-spread that further research could discover it is actually many species[vii].

The most widely-recognized benefit of the indigo is aesthetic; it’s pretty to look at.

The mushroom is also edible, and while it is not considered choice, many people do enjoy eating it. Cooked, it apparently tastes like portobello mushrooms, only with a crumbly, somewhat grainy texture. Scrambled with eggs, they turn the eggs green.

Indigo milk caps can also be used to make a fluorescent dye being investigated for possible use as a diagnostic tool in medicine[viii]. Non-experts frequently claim the mushroom can be used to dye textiles as well, but whether this is true or the result of confusion with the indigo plant (which definitely is important in traditional dye-making[ix]) is unclear.

An extract from the mushroom has been shown to have anti-microbial properties and to inhibit the growth of certain kinds of cancerous cells, but these were in vitro studies[x]. Whether the extract could be a safe and effective medicine in living subjects, or whether simply eating the indigo could have any medicinal benefit is not clear.

Indigo milk caps are not currently used as medicine, so issues of dosage do not apply.

Indigo milk caps are considered safe to eat, though it’s always possible for some individuals have hypersensitivities or allergies to any food. Incautious foraging could lead to tragic consequences, however, as this species bears a passing resemblance to some toxic species, including at least one that has caused human fatalities.