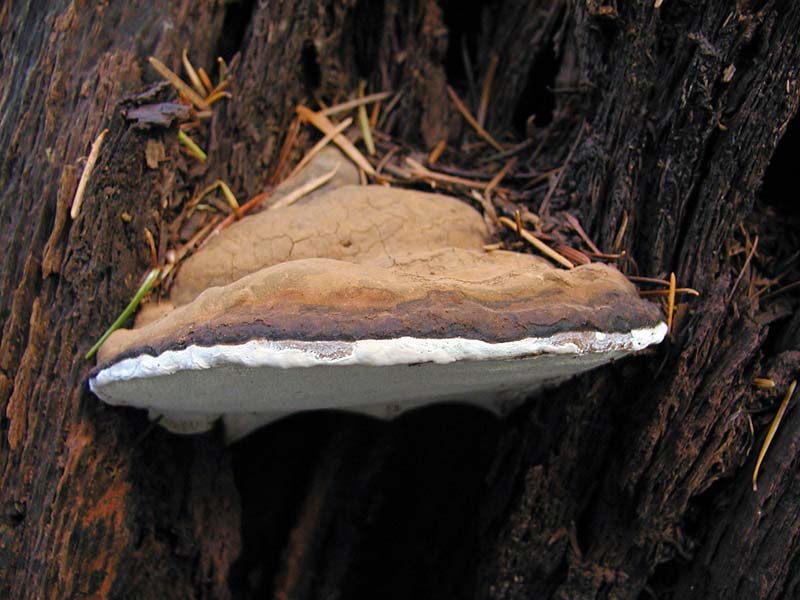 Other names include white reishi, tree tongue, and bear bread. Whether bears actually eat this “bread” seems unclear, but wild gorillas do[ii]. Humans cannot, since the conk is not only woody even when young but also bitter. It can be made into tea or other products reputed to have medicinal properties similar to the famous (and closely related) reishi[iii]. As with most medicinal fungi, many of these uses are not yet supported by scientific research, but that doesn’t mean they will never be.

Cap: Fan-shaped or irregular, sometimes very large, usually wider than it is tall, and almost flat-topped (in contrast to the many hoof-shaped conks), with a very woody texture. The upper surface is brownish or grayish, often with contrasting bands of color, hairless. The surface is not shiny, in contrast to some otherwise similar species.
Gills: No gills. The pore surface is pale, smooth (the pores are very small) and darkens slightly with age. The surface bruises yellow to brown on contact and the bruises then darken to brown.
Stem: No stem or a very short stem on the side. The shelf-like fruiting body grows horizontally, often directly from the substrate.
Smell: Nothing distinctive for ID purposes.
Taste: Nothing distinctive for ID purposes.
Spores: Oval, with a double wall visible by microscope.
Spore color: Brown. A brown dust of spores often covers the area under an actively spore-producing conk.
Edibility: Not palatable.
Habitat: Eats dead and dying trees of most hardwood species and some conifers. Common through most of North America. This species, or other similar species, also grows on every other continent but Antarctica.

G. applanatum[iv] sometimes fruits alone, or the conks can appear in groups. Each conk is perennial, and, if not harvested, can persist for years, adding another spore layer every year; it’s possible to age a conk by slicing it open and counting the layers, although the fungal individual that produced that conk may be much older. Strangely-shaped conks can develop if the tree the conk grows out of falls over—when that happens, the conk, too, ends up sideways, the wrong orientation for spore dispersal. The fungus deals with the problem by growing multiple new conks budded off from, and perpendicular to, the original. Note that because artist’s conks can be aged by their internal layers, a distorted conk indicates what year the tree fell over.

Some sources list G. applanatum by the scientific name, G. megaloma, but that is not widely considered a valid alternate.

All ganodermas resemble each other to some extent, but some are closer look-alikes than others. The famous reishi, G. lucidum, is not especially close, being shiny, mostly red, and not perennial, although the fact that some people refer to all ganodermas, including G. applanatum, as reishis[v] could cause confusion.

G. lobatum is a closer look-alike and has the same kind of pale, bruising underside (good for drawing!) that artist’s conk does. It differs in being less woody—the upper surface can be punctured with a thumb. It also grows a whole new conk every year, producing a stack of conks, instead of just a new spore-producing layer. G. brownii likewise looks similar except that it typically has a horseshoe-like shape[vi], not the flattish fan more typical of G. applanatum. In general, artist’s conk is both duller and more woody than most of its relatives.

The Red-Belted Conk, Fomitopsis pinicola, is also similar—although it is shiny on top, more like a reishi, it is woody and adds a new spore layer every year. The big difference is its spore surface doesn’t bruise.

But the important thing is that none of these species are especially toxic, though see notes under Side Effects.

G. applanatum extract does appear to have antioxidant properties[vii], although its medicinal properties have not been tested in living subjects. In general, there have been few studies of this species, but many of the closely related G. lucidum, the reishi[viii], which has a long history of medicinal use in Asia, and which has shown promise in a range of studies for uses including cancer treatment, immunomodulation, and diabetes treatment. However, the research is still considered preliminary. And while some practitioners treat all ganoderma species as medicinally equivalent, there is no good reason to assume that related organisms will be biochemically identical.

The best-established use of G. applanatum is still as an artist’s medium. Care should be exercised in harvesting conks, however, for while loss of a fruiting body does not damage the mycelium that produced it, a large conk can be a great many years old and will take a very long time to replace. This is not an art supply that should be used lightly (except when the conk is left on the tree to keep growing, when any marks will be temporary).

G. applanatum is not generally available in medicinal preparations, nor is there enough research to even establish what its properties may be. Those wishing to use the species for medicinal purposes anyway should rely on the judgment of a health practitioner experienced with it.

Because G. applanatum is rarely used medicinally and is not palatable, there is no easily-accessible information on the safety of ingesting it or its products. It is not generally regarded as poisonous, but not much is known about this species. There is reason for caution, however.

This species’ reputation as medicinal rests on its relationship with the reishi, and despite reishi’s very long history of medicinal use, it might not be safe[ix].

Reishi’s known side effects include dryness and itchiness in the mouth, throat, and nasal passages, nosebleeds, upset stomach, and bloody stools. Reishi wine sometimes causes a rash. Inhaling the spores can cause allergic reactions. It’s not clear how common these reactions are among users, though. Powdered reishi may be more dangerous than other reishi products, as extended use may damage the liver.

The presence of side effects does not, all by itself, preclude a substance from having medicinal use. It just means caution (and the guidance of a qualified professional) is in order. But clearly the ganoderma genus is not altogether benign. Assuming G. applanatum does everything good its more famous relative might do, without causing serious side effects, is not warranted. More information is necessary.