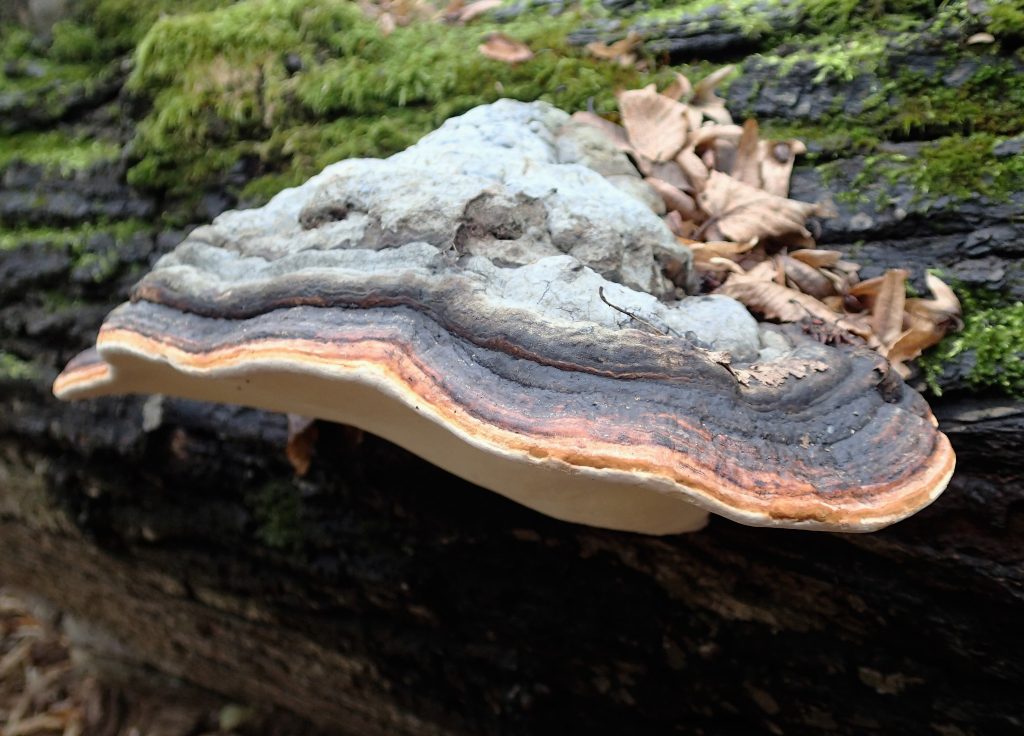 The Red-Belted Bracket[i] is a wood-eating fungus that produces hoof-shaped, woody, perennial fruiting bodies. They are not known to be toxic, but are too tough to eat. Teas and extracts can be made out of the fruiting body, though, and these are reputed to have at least some medicinal value[ii].

The issue of where, exactly, the Red-Belted Bracket can be found is a bit controversial. Some authorities consider that F. pinicola itself lives only in Eurasia, and that the very similar fungi in North America are simply look-alike relatives of several species[iii]. Other authorities object, holding that at least some of the North American fungi are F. pinicola, while others may be genuinely distinct[iv]. It’s likely that at least some herbalists and some suppliers treat all similar Fomitopsis material as the same. It’s worth noting that in cases like this, where the identity of a potentially medicinal species is open to question, assessing any claims of medicinal value gets very, very difficult. More on this later.

That being said, these are interesting fungi to know a thing or two about.

Cap: Large, thick, often hoof-shaped, very woody in texture. The upper surface may be entirely whitish in very young specimens, but develops bands of red, gray, brown, and black. The edge is almost always whitish, and there is almost always a red band just inside it. The surface is hard, often shiny, like lacquer. The interior flesh is woody or leathery and whitish, yellowish, or brownish. If cut open vertically, the multiple pore layers—a new one every year—should be easy to count.
Pore Layer:  Whitish or yellowish.
Stalk: None. The cap attaches directly and broadly to the substrate along one side.
Spores: Roundish and smooth.
Spore Print: Very pale yellow.
Smell: when fresh, fragrant or sour.
Edibility: Not palatable.
Habitat: Eats mostly dead wood, but can eat wood from living trees, too. Fruits from the trunk.
Range: Europe and Asia but It’s hard to say where this fungus lives when there is currently disagreement as to which fungi belong to which species.

These fruiting bodies can persist several years, adding a new pore layer every year. The distinctive red band might be absent in very young or very old specimens. Generally, fruiting bodies become darker and duller the older they get.

Red-belted bracket looks a lot like Hoof Fungus (Fomes fomentarius), though the latter never has a red or orange band. Younger specimens can also look quite a lot like some of the Ganodermas in the Reishi group (G. Sessile, G. Curtisii, G. Applanatum, G. Tsugae & G.Lucidum). However; Reishi’s are not hoof-shaped and may have short stems.

Of course, Red-Belted Bracket may well be a whole group of look-alikes, if they are not all one species.

Red-Belted Bracket[v] is not edible because its flesh has the consistency of wood. However, it has a long history of medicinal use, especially in Asia, of soups, teas, and alcohol preparations. Traditional uses include treatments for headaches, nausea, and liver disease. The chemical constituents of this fungus have been identified, and some are thought to have medicinal effects based on research performed on other mushroom species. Studies involving cultured cell lines, and a very few studies involving experimental animals suggest potential for use treating diabetes and certain cancers, but this should not be taken as “scientific proof” of effectiveness. Red-Belted Bracket may yield treatments for these conditions, but we don’t know yet.

Bizarrely, the Red-Belted Bracket seems not to have been tested to see if it really does any of the things it has traditionally been used to do.

Toxicity, Safety, and Side Effects

Red-Belted Bracket is considered non-toxic and is not known to have any side effects—although it may be that side effects have simply not been discovered yet, since there have been no clinical studies in living human beings.

One safety consideration is that of mushroom identity. If there are indeed as many as five different species of Red-Belted Bracket species, then research conducted on one species might not apply to the others. Traditional uses of one species might or might not be relevant to the others. If one species is shown to be safe and effective for a certain use, that won’t necessarily mean the others are. And for consumers buying Red-Belted Bracket products, it may be difficult to be sure which species the product was made from.

People interested in using this species should not only consult an experienced health practitioner for all the normal reasons, but also to get a recommendation for a brand that actually contains the same mushroom the practitioner thinks you should take, instead of some other species that happens to be wearing the same name at the moment.