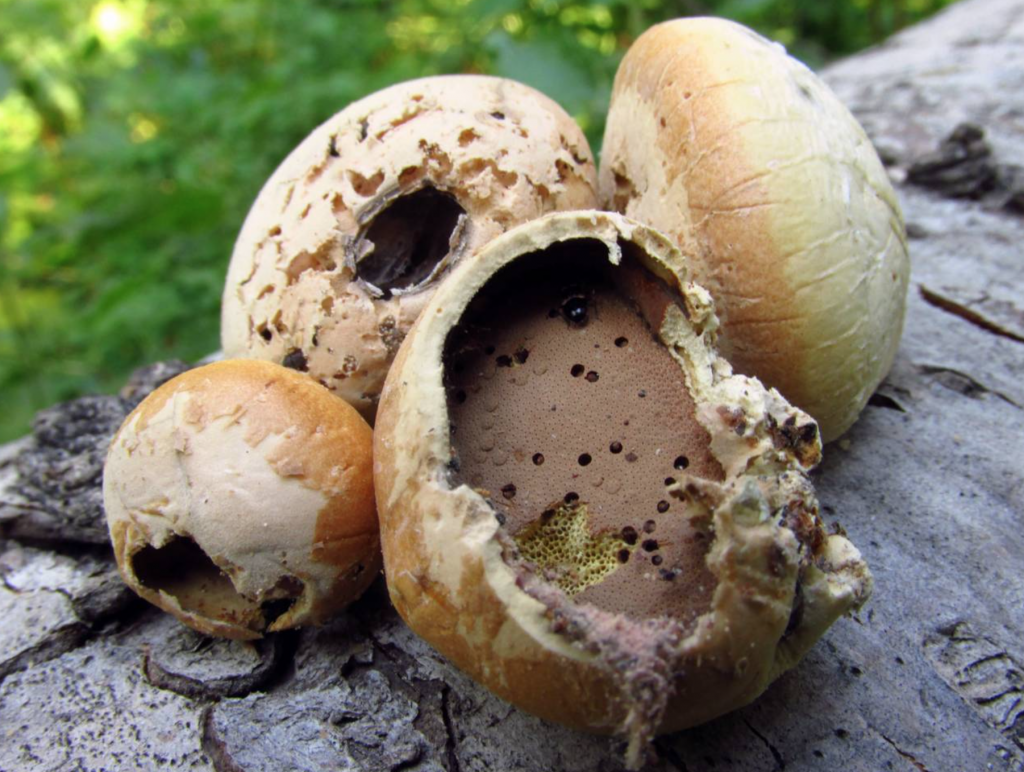 The Veiled Polypore[i] looks like a Puffball. It isn’t. It is, indeed a polypore, a very clever polypore.

The fruiting bodies of this fungus have a layer of thin tissue covering the pore surface so that when the spores are released from the pores, they can’t waft away on the wind. Instead, they pile up in the space between the pore surface and the veil. Then, when wood-boring beetles enter that space, they get dusted all over with spores. Then the beetles do what wood-boring beetles usually do, and bore into wood, thus planting the spores right where they need to be, an inch or two deep in the sapwood of a dead or dying tree.

While some writers describe this species as edible, but most refer to it as “woody” or “corky,” suggesting that it isn’t palatable.  In any case, it used in Traditional Chinese Medicine, and preliminary research does suggest medicinal potential[ii].

Fruiting Body: Small to medium-sized, appearing entirely round because the under-surface is covered by a veil of tissue.  Yellowish to tan, sometimes orangish. The pore surface is brownish to brown. Older specimens have an opening in the veil for beetle entry. The interior flesh is white and tough.
Stalk: None.
Spores: Cylindric, smooth.
Spore Print: Pinkish
Edibility: Not palatable
Habitat: Eats and fruits from recently dead conifer trees. Not found in trees that have been dead over two years.
Range: There are small, scattered populations across Asia and North America.

The veiled polypore is a specialist of old-growth conifer forests. There are very few of these left, so this fungus is quite rare and getting rarer[iii]. We have not been able to find documentation of which states and provinces have populations currently.

Other than Puffballs, to which the resemblance is only superficial, this fungus has no look-alikes.

Although the Veiled Polypore has been used as part of Traditional Chinese Medicine to treat a variety of ailments, research into how these treatments work, or even whether they work, is in its infancy. There have been few, if any, clinical studies of human subjects. There have been few studies involving animal subjects (although an extract from this species was able to relieve the symptoms of rats experimentally given sinus allergies[iv]). A study using cultured cell lines and experimental-infected mice suggest that extracts of this fungus may be useful for treating influenza and possibly some other viruses[v]. In another study, extracts had weak activity against cancer cells, again in a dish, not a patient[vi]. It should be remembered that because lots of things can kill cancer cells in a dish that should not be used as medicine (bleach, for example), such a study is only a preliminary hint that a substance might work (weakly) as medicine. It is not scientific proof that this mushroom cures cancer—not yet.

The Veiled Polypore has medicinal potential and should be studied, but as yet the available research offers no more than hints. We don’t know what results further research will yield.

This species is not considered toxic, but it is unpalatable due to its cork-like texture. It has no culinary or nutritional benefit.

There is one documented case of gastrointestinal upset following the consumption of a Veiled Polypore-based medicine[vii], however it is hard to draw any conclusion from a single incident.