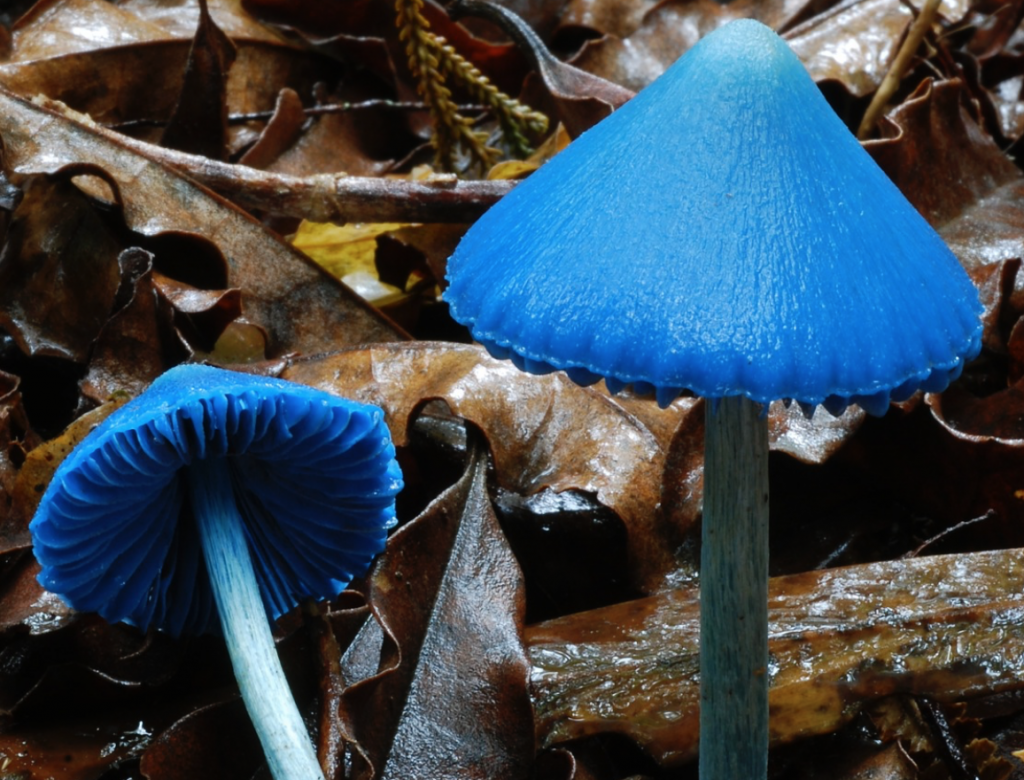 “Blue Pinkgill[i]” seems an odd name for a mushroom, but there is a simple explanation. This species is part of a group that typically has pink gills—and indeed its spores are pink, so the gills can be pinkish when releasing spores. But this pinkgill is blue—even its gills are mostly blue.

And we’re talking blue blue. It’s a gorgeous, rich color. And since this species is not known to be edible and has no known medicinal value, “it’s blue and beautiful” is the main thing that can be said about it.

But isn’t that enough?

Cap: Small to medium, often pointed. Blue.
Gills: Attached. Blue, but may be pinkish because of the presence of the spores.
Stalk: Long, thin, may be visibly twisted, bare. Blue.
Spores: four-sided, smooth.
Spore Print: pink.
Smell: Nothing useful for identification.
Taste: Nothing useful for identification. Probably tastes blue, though.
Edibility: Unknown, but many of the Entoloma genus are poisonous.
Habitat: Fruits singly or in pairs from the ground in mixed forests of broadleafed trees and podocarps. Likely feeds on dead plant matter, though some authors claim this species is mycorrhizal.
Range: Throughout New Zealand.

The Blue Pinkgill definitely lives in New Zealand, but mushrooms that are either the same species or something similar-looking have been found in India, Australia, and Japan. At one time, all were lumped together in one species, but it is clear now that the Japanese population is a different species. It is not clear whether the Australian and Indian populations are.

The Blue Pinkgill doesn’t have any close look-alikes within its range—very little else is that blue. But if the pink bluegills in Australia, Japan, and India are not this species, then they are certainly look-alikes of it.

There are currently no known uses of the Blue Pinkgill.

Since the Blue Pinkgill is not currently used as a medication, it can’t have side effects. Its status as far as edibility goes isn’t know. However, since there are known poisonous species in the same genus, taking a bite to see what happens is probably a bad idea.