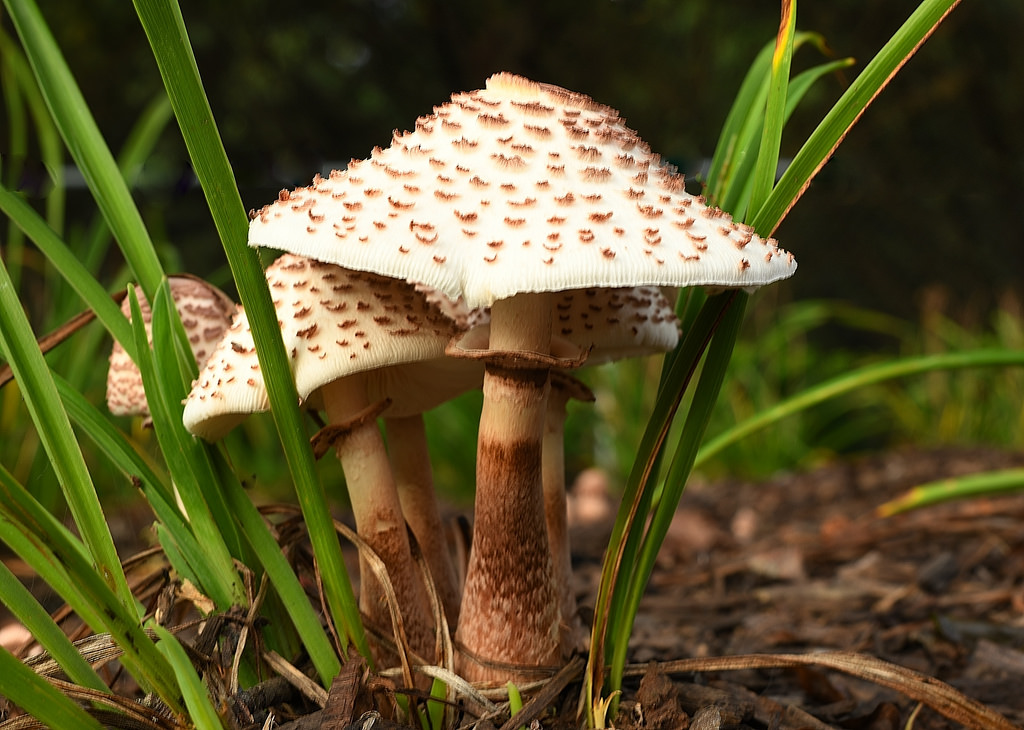 The Reddening Lepiota[i] is an edible mushroom, though it’s far from choice. It is not used medicinally. However, the mushroom is easy to find because it grows most commonly in urban and suburban areas in wood chips and stumps. Beginners should have plenty of opportunity for practicing identification with the species—that doesn’t mean beginners should harvest the Reddening Lepiota for the pan as it has toxic look-alikes.

Cap: Medium to large. Rounded at first, then flattening, though there is still a low bump in the middle. The upper surface is whitish or light brown when young that darkens and fractures with age, forming fleshy, peeling scales with white or whitish flesh beneath. Gets reddish with age and redder still when handled. The interior flesh is white but stains yellow or orangish if sliced. If dried, turns reddish.
Stalk: Medium length but quite thick, especially at the base. White or whitish at first, then darkening to reddish brown. Has a ring. Bruises very distinctively when handled, first turning yellow, then red.
Gills: Not attached to the stem. Crowded. Whitish when young, then turning pinkish and finally reddish-brown.
Spores: Ellipsoid, smooth.
Spore Print: White.
Smell: Nothing distinctive for identification.
Taste: Nothing distinctive for identification.
Edibility: Edible if cooked first, but not choice. The flavor of this species is said to be both sour and bitter. Many people simply do not like it, though of course both sourness and bitterness do appeal to some[ii]
Habitat: Feeds on dead wood in disturbed places, such as abandoned lots or landscaped beds. Fruits often from wood chips or stumps. Rare in woodlands and forests.
Range: This species is common across eastern and mid-western United States and Canada, but rare from the Rockies west. There are also populations in some other countries, but they may have been introduced, probably on landscaping mulch.

The yellow-then-red bruising is a very distinctive field-mark, as is the swollen base of the stem.

The closest look-alikes[iii] are probably The Parasol and the various Shaggy Parasols, including the False Parasol, all of which differs from the Reddening Lepiota in having a thinner stem without any swelling at the base. The Parasol is safe to eat while the Shaggy Parasols vary from usually safe to, in the case of the Green-Spored False Parasol, usually poisonous. Several Dapperlings, some of them very dangerously poisonous, could also be mistaken for the Reddening Lepiota, though they are usually smaller. Several of the Agaricus species, some of which are edible while others are poisonous, could also be easily mistaken for the Reddening Lepiota, too, though they are much less scaly and have dark spores.

Looking alike is relative. Species that look very different to experts might be easily confused by beginners who don’t yet have a good sense of which details are important—or even by experienced foragers who have become over-confident and aren’t paying attention. The aptly-named Destroying Angel could conceivably be mistaken for the Reddening Lepiota. It is not-infrequently mistaken for Parasols and Agaricus species, after all.

Reddening lepiota has no known medicinal benefits, and nutritional information is not readily available for it. However, most edible mushrooms are healthy to eat, at least in moderation.

Though generally considered safe, the reddening lepiota can cause gastrointestinal upset if not properly cooked. The more serious danger is probably that of misidentification, given its several poisonous look-alikes.