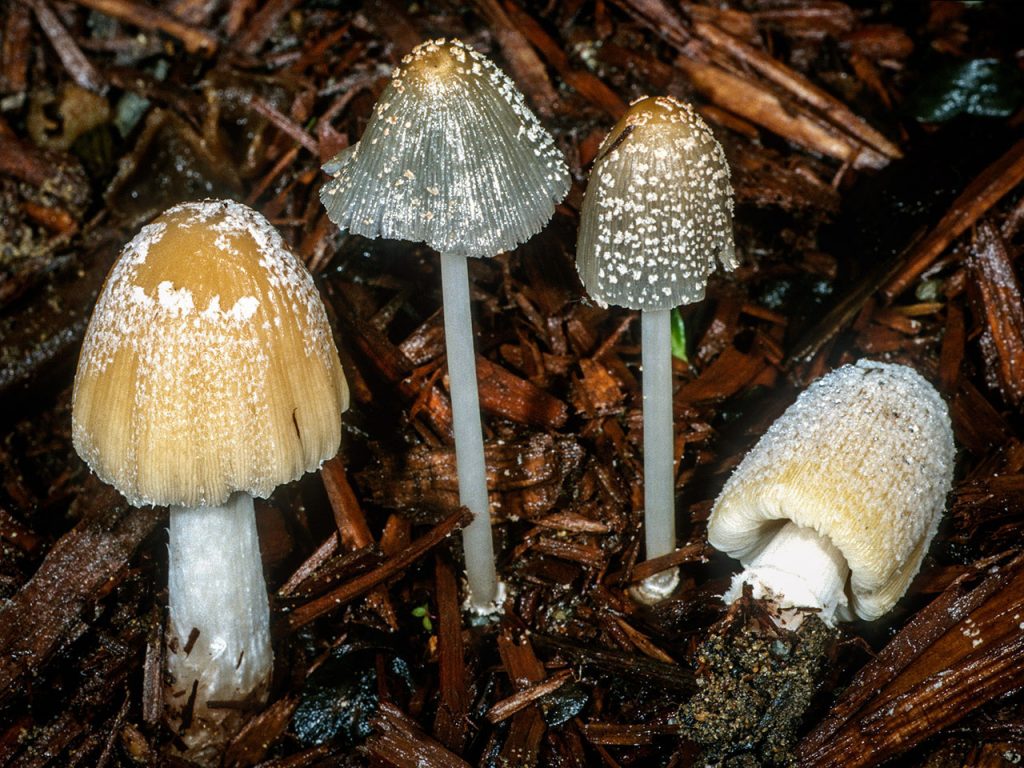 Coprinellus flocculosus[i] is an inkcap, meaning it turns into inky goo at maturity, but it is not closely related to the edible Shaggy Mane or Common Inkcap[ii]. It is not known to be edible.

Cap: Small, initially longer than wide, yellowish brown, becoming gray with age. The upper surface is covered by small, whitish, felt-like patches, the remnants of the shell of tissue that encloses very young specimens in their button stage. Older specimens will have inky margins.
Stalk: Long, thin, whitish, may have a cup of tissue at the base.
Spores: Smooth, almond-shaped.
Spore Print: Blackish
Smell: Nothing useful for identification.
Taste: Nothing useful for identification.
Edibility: Not known.
Habitat: Eats wood chips, sawdust, straw, and similar things. May fruit from the straw in animal pens, but will not fruit from dung.

The gooification process (the technical term is “deliquescence”) starts on the edge of the cap and then progresses inward. Essentially, whereas most mushrooms open up like umbrellas to expose the maturing spores, inkcaps simply release the spores from the outer-most part of the gills, the dispose of these to expose the next section for release, and so on. So the cap starts out as a long cylinder, and then begins to open up, but gets smaller, turning to goo as it goes, until it ends up almost flat but very, very small. Collecting the mushroom for study seldom works because the specimen will so quickly turn entirely to goo.I

It is native to much of the United States, but whether it also occurs in other countries is not clear. There is typically little information available on species that are not known to be either edible or poisonous.

Coprinellus flocculosus[iii] has a number of close look-alikes in the same genus, perhaps most importantly, the edible Mica Cap (C. micaceus), which has a slightly different habitat preference. Also, the patches on its cap are not felt-like but almost glittery.

There are also at least two species that are identical to each other, except in microscopic characters, and very similar to Coprinellus flocculosus. These don’t have commonly-used common names: C. domesticus and C. radians. They differ from Coprinellus flocculosus most notably in their habitat preferences and in their possession of an ozonium, an odd structure that looks a bit like an orange rug that persists much longer than the fruiting bodies do. No mycologist has figured out yet what the ozonium does, and in any case Coprinellus flocculosus doesn’t have one.

Because Coprinellus flocculosus has both patches on its cap and (sometimes) a cup of tissue around its stem, it could conceivably be mistaken for some sort of Amanita, though few of them are quite so small.

Coprinellus flocculosus is not known to be edible, nor has it been investigated for medicinal potential. Its ink could probably be used to write with, but that does not seem a very practical way to get writing supplies. Basically, this species does not currently benefit humans except by being a fungus on Planet Earth, which is a pretty awesome thing to be.

Toxicity, Safety, and/or Side Effects

Coprinellus flocculosus isn’t known to be toxic—but it’s not known to be safe,, either. Basically, we have no idea what the effects, good, bad, or indifferent, of eating these things, or products made from them, might be. It’s probably better not to try eating them.