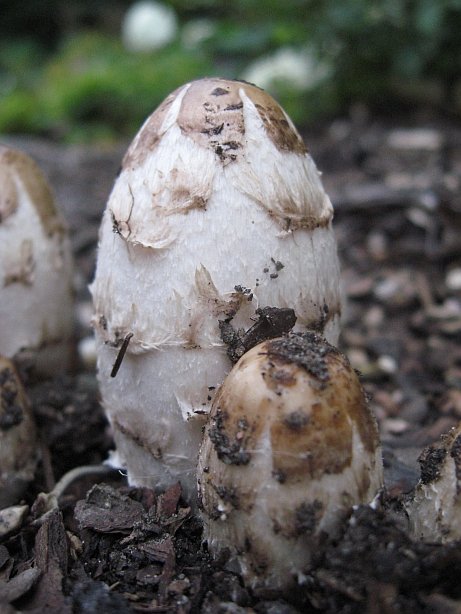 What is Shaggy Mane Mushroom?

Cap: 2.5-5 cm wide; oval to cylindrical, aging to convex or bell-shaped; dry; with shallow grooves near the edge; white, with reddish brown scales. Flesh soft, white.
Gills: free of the stalk, very crowded together, white when very young, becoming gray, then black, and dissolving (deliquescing) with age.
Stalk: 5-20 cm long, 1-2.5 cm thick, becoming enlarged at the base; white, with a hollow interior; with a white, ring-like zone of fibers near the base.
Spore print: black.
Habitat: solitary, scattered, or clustered on lawns, in pastures, or along roadsides; spring, fall, and early winter.

The shaggy mane is a favorite amongst mushroom hunters as it is easily recognized, with no dangerous look-alikes. Furthermore, it is a delicious edible.

However, be sure to cook your specimens shortly after picking; this species will auto-digest (deliquesce) and will probably not last in your refrigerator overnight.

Using the Limulus Factor G test, the amount of (1→3)-β–glucan has been quantified in C. comatus (in addition to various other fungi). The Limulus Factor G test is normally used to measure the (1→3)-β–glucan content in human serum resulting from infection by disease-causing fungi like Candida or Aspergillus, to help clinicians in early diagnosis of infection. However, it is also suitable for detecting (1→3)-β-glucan content in crude mushroom polysaccharide extracts. C. comatus was identified as having ‘superior’ (1→3)-β–glucan content, compared to 18 other medicinal or edible species (Yang et al., 2003).

The chemical structure of a water-soluble fucogalactan obtained from the crude intracellular polysaccharide of Coprinus comatus mycelium was characterized by sugar and methylation analysis along with 1H and 13C NMR spectroscopy. The polysaccharide is composed of a pentasaccharide repeating unit (Fan et al., 2006).

The water extract of Coprinus comatus was recently identified as containing potent antitumor compounds for breast cancer. Because breast cancer is the most commonly diagnosed cancer among women worldwide, and because there is no effective therapy for estrogen-independent (ER-) breast cancer, these findings are highly significant. The antitumor potential of the water extract was shown to manifest itself in three ways:

An alkaline protein named y3, purified from fruiting bodies of C. comatus, was shown to inhibit a gastric cancer cell line with an IC50 of 12 µg/mL (Wu et al., 2003).

Serum lysozyme activity is used as a general indicator of immune system fitness. In addition to breaking down polysaccharides found in bacterial cell walls, lysozyme can also bind to the surface of some invading bacteria and make it easier for white blood cells to engulf them. Chinese research has shown that polysaccharide solutions extracted from C. comatus and given to mice had the ability to increase serum lysozyme activity (Li et al., 2001).

In other studies, the hypoglycemic activity of fermented mushroom of Coprinus comatus rich in vanadium was investigated. Vanadium salts have insulin-mimetic activity, and vanadium compounds are being studied as potentially orally active replacements for insulin. Vanadium salts mimic most of the effects of insulin in vitro and also induce normoglycemia and improve glucose homeostasis in insulin-deficient and insulin-resistant diabetic rodents in vivo. One study showed that Coprinus comatus fermentation liquid and sodium vanadate inhibited ascension of blood glucose in mice (Han et al., 2003). The blood glucose and the HbA1c (glycosylated hemoglobin – used to measure plasma glucose concentration) of the mice were analyzed. Also, the sugar tolerance of the normal mice was also determined. After the mice were given the vanadium-rich mushroom mycelia, the blood glucose and the HbA1c of hyperglycemic mice decreased, ascension of blood glucose induced by adrenalin was inhibited and the sugar tolerance of the normal mice was improved. Also, the body weight of the alloxan-induced hyperglycemic mice was increased gradually. In the fermented mushroom of C. comatus, vanadium at lower doses in combination with C. comatus, induced significant decreases of the blood glucose and HbA1c levels in hyperglycemic mice (Han et al., 2006).

Polysaccharides extracted from the mycelial culture of C. comatus and administered intraperitoneally into white mice at a dosage of 300 mg/kg inhibited the growth of Sarcoma 180 and Ehrlich solid cancers by 100% and 90%, respectively (Ohtsuka et al., 1973).

Coprinus comatus is known to contain compounds that kill nematodes (Li and Xiang, 2005). Specifically, this fungus immobilizes, kills and uses free-living nematode Panagrellus redivivus and root-knot nematode Meloidogyne arenaria. It does so by making a structure called a ‘spiny ball’, a burr-like structure assembled with a large number of tiny tubes. Nematodes added to C. comatus cultures grown on nutrient agar become inactive in hours. Electron microcopy shows that C. comatus infects P. redivivus by producing penetration pegs from which hyphae colonize nematode bodies. Within days, the infected nematode is digested and consumed by mycelial hyphae. It is thought that this may be a mechanism to help the fungus thrive in nitrogen-poor environments (Luo et al., 2004).

Over fifty years ago, shaggy-manes were found to contain ergothioneine, a thiol compound with antioxidant properties (List ,1957). The anti-oxidant activity was later confirmed (Badalyan et al., 2003).

A study of flavor compounds present in C. comatus (Dijkstra and Wiken, 1976; Djikstra, 1976) revealed a variety of compounds in the water extract from the fruit body, including:

Interestingly, a mixture of 37 compounds found in the extract had a stronger flavor than the natural extract, suggesting the presence of compounds that mask or lessen the flavor intensity.

The fatty acid composition (by % of total fatty acids) of C. comatus is summarized in the table below:

A Russian study has revealed that various strains of the genus (formerly known as) Coprinus, including C. comatus, have antimicrobial activity (Ershova et al., 2001). I’ll post more details once I get my hands on the original article.