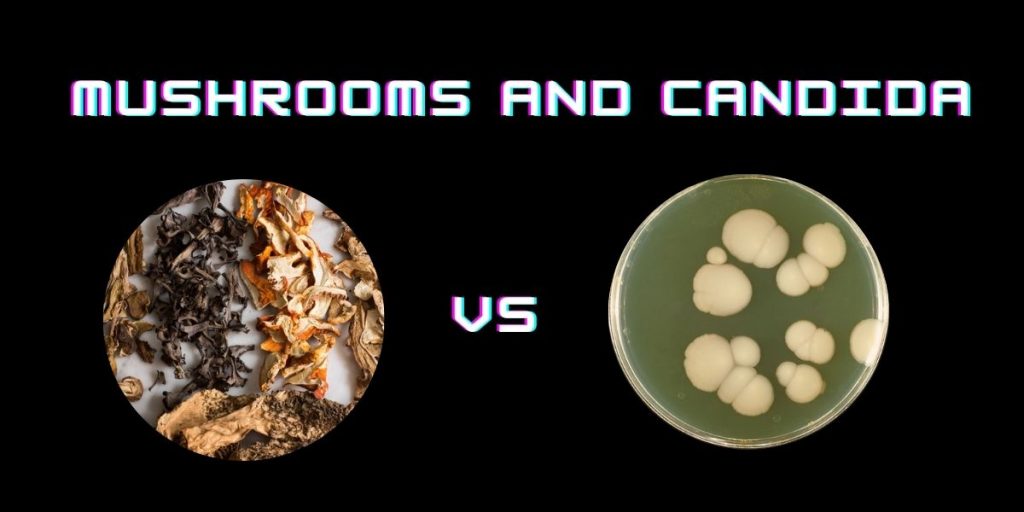 Candida[i] is a genus of yeasts that live on or even in the human body. Candida albicans is one of the most common. They are part of the microbiome, the community of organisms whose habitat is us—in a way, they are part of us, because although they are not human cells, we wouldn’t be healthy, and perhaps would not be fully human, without them. But just as with any other ecosystem, if something goes wrong, one member of the community can start growing like a weed and cause problems.

Some forms of candidiasis are basically annoyances and can be treated with over-the-counter preparations, while others are serious and may require hospitalization. Medicinal mushrooms are not part of any of the standard treatments, and should never be used in place of them, but mushrooms may play a role in treatment.

The symptoms, prognosis, and treatment of candidiasis vary depending on where the overgrowth is. The skin, mouth, and vagina are the most common sites. More rarely, it can occur on the penis or inside the anus[ii]. candidiasis is most common in people who have an underlying health problem, such as a suppressed immune system or a microbiome recently disrupted by a broad-spectrum antibiotic. Poor hygiene or close contact with someone else with candidiasis also raise a person’s risk, as can a few other factors, but some people just get yeast infections easily for no clear reason.

None of these types of yeast infections are medically dangerous under most circumstances, and all of them usually respond well to simple, over-the-counter medications. Proper diagnosis may require a doctor, though, as each can closely resemble other, more dangerous, diseases.

Be careful to only use medications for the area of the body they were designed for, unless told to do otherwise by a doctor. Creams and so forth that are safe for application to one body-part might cause serious problems elsewhere.

Invasive, or deep, candidiasis is a potentially life-threatening condition in which Candida enters the bloodstream and can attack the internal organs and bones. Unlike the skin and mucus membranes, where candidiasis is simply an overgrowth of a normal part of the microbiome, the interior of the body should not have any resident Candida, and its presence there is a true emergency and requires hospital treatment. Fortunately, most patients are in the hospital already, since the most common way for the yeast to enter the body is on surgical implements or other medical devices. Again, it is more common in people who have weakened immune systems already.

Candida is not the only fungus that can cause human disease. Fungal diseases are not talked about as often as bacterial and viral diseases, but they are a problem, and just like bacteria, disease-causing fungi can evolve resistance to the drugs used to treat them. One strain of Candida auris, a relative of Candida albicans, has evolved resistance to all known antifungal drugs—and is capable of causing deadly invasive candidiasis[iii]. The dangerous strain is spreading mostly in healthcare settings, and healthcare professionals are working to understand the problem and prevent its spread.

“Yeast syndrome” is a systemic problem in which yeast overgrowth in the gut is thought to cause a range of vague and persistent symptoms, including exhaustion and mental fogginess. The alternative healthcare practitioners who describe the condition recommend dietary changes as the main form of treatment. The main problem here is that there isn’t any hard evidence that yeast syndrome exists, or that diet can play a direct role in candidiasis—the symptoms themselves may be quiet real (but have other causes), and may indeed lessen or resolve on the new diet, but that’s simply because the recommended diet is healthier overall[iv].

It’s important to note that a lot of writers will reference yeast syndrome without actually using its name.  Instead they may simply list its symptoms alongside those of genuine forms of candidiasis, or recommend the dietary changes alongside the proven treatments. Most people who write online content are not doctors. It’s important to read these things with one’s critical-thinking cap firmly in place.

“Yeast syndrome” sounds true because it is almost true. Candida can play a role in some gut-health issues, such as Crohn’s disease. And since diabetes does increase a person’s risk of candidiasis, there are persons for whom eating too much sugar can trigger yeast overgrowth. And yes, diet and lifestyle have a greater impact on health than many people like to admit. But eating foods known to ferment easily, such as sugar, doesn’t cause Candida overgrowth because the body is not that simple. When we are healthy, our bodies absorb what we need from our food selectively and then metabolize these substances carefully so that bodily function stays about the same almost no matter what we eat (within reason!). When that process breaks down, what symptoms we experience depend on what broke down and how and why—not on what would happen if we mixed the offending food in a bowl with yeast.

A related common misconception is that eating too many mushrooms can somehow encourage Candida, since both are fungi. That idea not only discounts the complexity of the human digestive system, it also discounts the diversity of fungi, which are, after all, an entire kingdom. For example, the shitake (Lentinula edodes) is not even in the same phylum as Candida, making the two about as closely related as a bird and a worm—both animals, but not really alike. Even if a shitake could somehow survive being cooked, chewed up, swallowed, and sent through the stomach to go meet Candida in the intestine, they wouldn’t necessarily be on the same side.

In fact, some mushrooms produce very effective antifungal chemicals, which is one reason to suspect mushrooms may be able to treat candidiasis.

There are two possible ways that taking mushrooms or mushroom extracts might help with candidiasis. One is that mushrooms might be able to address the underlying problems that make candidiasis more likely—for example, there are a number of mushrooms that have potential for treating diabetes or addressing immune-system problems. Of course, diabetes or immune deficiency should also be treated by a doctor.

But many mushroom species have antifungal properties and could be used to reduce excessive Candida populations directly. For example, Reishi (Ganoderma lucidum) is the active ingredient in an anti-Candida toothpaste that has shown effectiveness in laboratory tests—although the test involved no human or animal subjects. Instead, test tubes full of Candida broth were mixed with varying amounts of the toothpaste, which effectively killed the Candida at relatively low doses[v]. In another study, a reishi extract proved effective at killing biofilms of either of two Candida species, again with no human or animal subject[vi]. At least one preliminary clinical study did show reishi extracts as effective against candidiasis in hospitalized patients[vii]. Turkey tail (Trametes versicolor) also kills Candida in laboratory experiments, but not as effectively as standard medications do[viii]. A substance extracted from Lion’s mane (Hericium erinaceus) inhibited Candida growth in a laboratory setting[ix].  Extracts from Shiitake (Lentinula edodes) also killed Candida in a laboratory setting, but only at a high concentration[x]. Another study found that fresh, whole shitake prevented the growth of Candida, but that mushroom that had been cooked seemed less effective[xi].

The bottom line is that the research is preliminary but promising.

This is my Favorite Mushroom Supplement