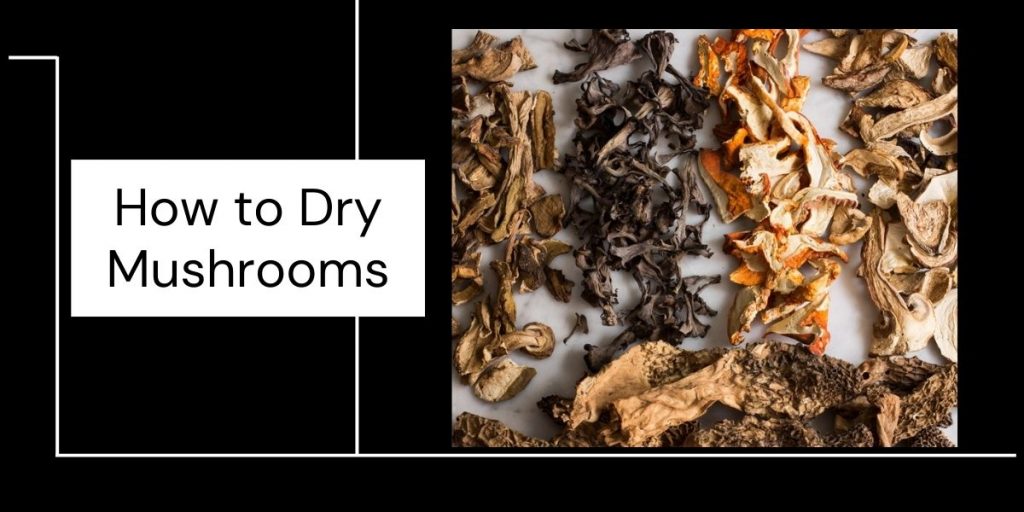 Why dry mushrooms? So they don’t go bad is the short answer. Mushrooms in their natural state don’t have an indefinite shelf-life. Proper storage helps (air flow is good!), but even under the best conditions many have days at most before they turn slimy or start to mold. That’s not enough time to make use of a nice big flush (or the several pounds bought on sale at the grocery store). There are many different ways to preserve mushrooms, including pickling, freezing, and making into ketchup (yes, mushroom ketchup is a real thing[i]), but drying is among the simplest and most versatile.

Drying also improves the flavor of some mushrooms, and is necessary step in making mushroom powder for use in soups, butters, and rubs.

It’s worth noting what drying won’t do, though; drying will not cook a mushroom. This is important because many mushrooms are indigestible or even toxic when raw, and there are writers out there who claim drying is an alternate form of cooking, a way to make these mushrooms edible. Such writers are wrong. A mushroom that goes into a dehydrator raw also comes out raw.

What Mushrooms Should You Dry?

What mushrooms should be dried? Oysters, Shiitake, Morels, Chanterelles, Magic Mushrooms (Cubensis), Puffballs, Lobsters, Reishi, Trumpets, and Turkey Tail. In short, most of them!

Most edible mushrooms dry well. Drying and then powdering is an especially good option for puffballs, as many people dislike their texture when fresh, or for mushrooms that have been nibbled by bugs. But not all mushrooms dry well the same way.

For many species, drying mushrooms with a food dehydrator using a high setting will improve the flavor, however, heat can trigger older specimens, or those of delicate species, like slippery jacks, to go bad faster (sometimes to the point of liquefying in the dehydrator), especially if there isn’t enough airflow[ii]. “Magic” mushrooms also need little or no heat, since heat can trigger the breakdown of psilocybin[iii].

“Magic” mushrooms have the same biochemical effects, for better or worse, fresh as dried. The reason to dry them is so that they’ll last longer, just like with other mushrooms. As for legality, until 2005, in Britain psilocybin mushrooms were only illegal after they were processed in some way, which could have been interpreted to mean that fresh ‘shrooms were fine—but the law has since changed.

Thick-fleshed mushrooms, such boletes, take longer to dry than thin, hollow mushrooms such as trumpets, though all should be sliced before drying.

How to Dry Mushrooms

There is more than one way to dry a mushroom. The choice depends on the type of mushroom, the quantity of mushrooms, how long the dried material has to last, and—to some extent—on the taste of the user. For example, some people like having the fanciest gadgets while other believe simpler is better.

Each method has its pros and cons, and most will work if done right.

The simplest way to dry a mushroom is in the open air. Unfortunately, air-dried mushrooms will retain some moisture, except in very dry climates, and will have a shelf-life of only a few weeks, sometimes less, before they start to grow mold. That’s still a longer shelf-life than a fresh mushroom has, and the method has the advantage of requiring no special equipment.

Air-drying is a good option for people who occasionally harvest or buy just a little more than they can use in a week.

A longer shelf-life—several months or more—usually requires just a little heat, enough to drive off the last bit of moisture. A fully-dehydrated mushroom is almost brittle, not pliable or spongy. It’s possible to use an oven on a very low setting, perhaps with the door slightly open. But since oven-drying provides very little control and can waste a lot of energy, it’s seldom a good option for anyone. It might work as a kind of trial run, but someone who wants to dry mushrooms regularly is almost certainly going to want a dehydrator.

Food-dehydrators come in many different types, but they can be roughly divided into two categories—basic and advanced. The choice depends on the needs of the user.

Advanced models feature a thermostat, a timer with an automatic shut-off, and all the mushrooms get done at the same time because the air-flow and heat are even. These machines win on convenience, plus the degree of control they offer is an absolute necessity for “picky” mushroom species that can be ruined by too much or too little heat.

It’s less obvious why anyone would want a basic model, but they are better for some users. They cost less and are usually smaller (meaning easier to store when not in use), and since they only have one button (an on/off switch), they are simpler to operate, even if a bit more labor-intensive. Basic dehydrators are a good option for people who don’t dry mushrooms often, don’t dry “picky” species at all, and don’t want to spend a lot of time figuring out which settings are best. Just load up the machine, turn it on, check the mushrooms occasionally, and take them out when they’re done.

This is Rated as our #1 Food Dehydrator for Drying Mushrooms

There are other drying methods in use, though they are less advisable. For example, what about air-drying with a fan? The theory is that the fan speeds drying. However, in practice, fan-drying takes a day or two[v], which is about the same amount of time air-drying without a fan takes. The result is also similar—incompletely dehydrated mushrooms.  So what is the point?

Because fan-dried mushrooms aren’t completely dehydrated, the usual procedure is to use a desiccant, like Epsom salt or dry rice, to finish up. This can work, if done properly[vi]. But the desiccant usually has to be heated or otherwise prepared, and in any case must be purchased. The whole process, including the two days pre-drying (with or without a fan) is seldom quicker or easier than buying a dehydrator. The main reason to use a desiccant is to avoid using heat, a concern for some mushroom species but not others.

Drying mushrooms is one of those things that usually turns out OK. Nonetheless, there are some important points to keep in mind for best results[vii].

[iv]     Adams, C. (2006). Is It Dangerous to Eat Magic Mushrooms Before They Have Dried Out? What Mushrooms Are Safe to Eat? The Straight Dope