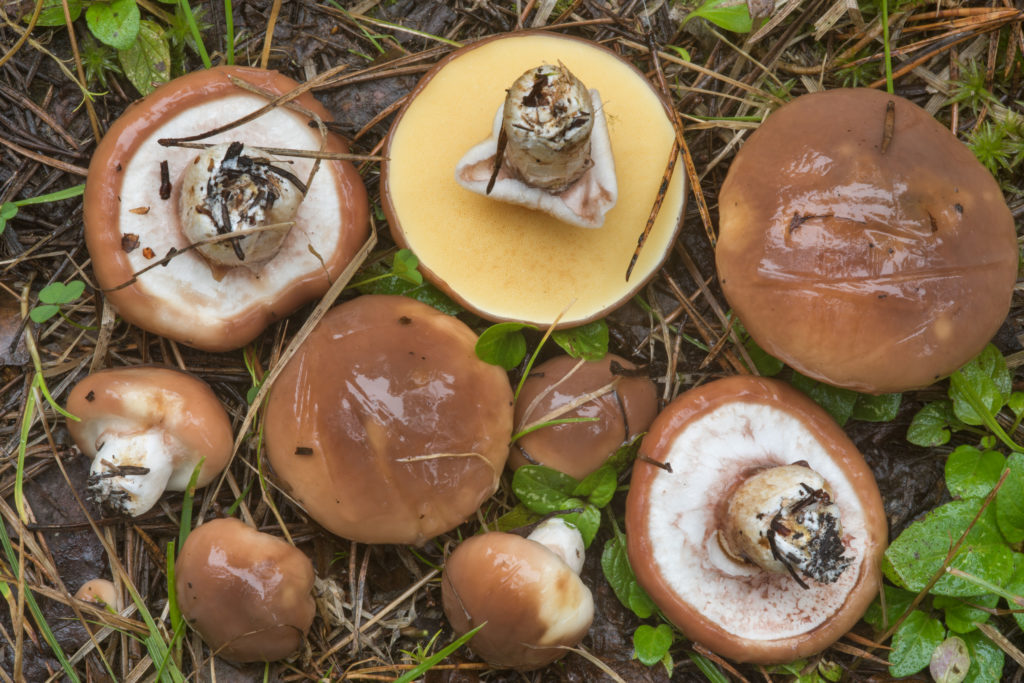 Suillus luteus is an edible mushroom and a member of the Bolete family. The latin translation is swine for Suillus and muddy is the latin translation for luteus. The cap of the mushroom is slimy or ‘slippery’, as the alternative name Slippery Jack suggests. Slippery Jack is a name may be used to describe other members of the Suillus genus. The Slippery Jack is also referred to as sticky bun or sticky pine bolete. Suillus luteus is commonly eaten in soups, stews or stir fries. The slippery Jack mushroom was first described as Boletus luteus in 1753 by Carl Linnaeus before being re-classified in 1796 as Suillus luteus. The mushroom starts sexual reproduction from their large edible fruiting bodies that produce massive quantities of reproductive spore (basidiospores), spread by wind and/or mammals. It also forms visible tissue extensions, fungal roots (mycorrhizas) that probe into the mineral soil, colonising root systems of trees.

One feature of the mushroom is its ability to evolve metal-tolerant ecotypes. On soils that are contaminated with trace metals it seems that populations of metal-tolerant mushrooms can evolve [1].

Cap: 5 -10cm in diameter, sometimes up to 13cm. Rusty orange or medium-dark chestnut brown, shiny when wet and semi-matt when dry. The cap starts as cone-shaped gradually becoming flatter. Flesh is yellow and does not change color when damaged.
Gills: The mushroom looks like any regular mushroom from the top, but under the cap there are no gills, instead there are pores – layers of small hanging tubes.
Pores:  Light yellow when the mushroom is immature, these change to a darker yellow as it ages.
Stem: The stem is pale, with dark speckles near the top; approx. 3cm in diameter and up to 13cm tall. There is a floppy/hanging ring on the stem that goes a darker purple with age.
Smell: Mild smelling and mushroomy; when dried it smells woody.
Taste: Mild.
Spores: Irregular in shape; spores are released from the pores under the cap.
Spore color: Brown.
Edibility: Edible but must be cooked fully and the slimy cap should be peeled off before consuming.
Habitat: It grows in large clusters above the ground, beneath pines and coniferous areas and along paths; usually in shaded and damp conditions.  Slippery Jack has a symbiotic relationship with trees by wrapping its fungal tissue around the tree’s underground roots.
Location: It is common throughout Scandinavia, and also found in North and South America, Africa, Australia, New Zealand and Europe.
Season: The mushroom grows in summer and autumn.

The Suillus granulatas is a common look a like of Suillus luteus in addition to also having a symbiotic relationship with pines, but it is easily distinguished by the lack of the ringed stalk. Suillus grevillei (also called Greville’s bolete or larch bolete) may also be confused with Suillus luteus.

Mushrooms have been extensively researched and are well known for their nutritional value. They are rich in fibre and protein and edible mushrooms are also known to have antioxidant properties. Always seek medical advice from a professional before consuming Slippery Jack for medicinal purposes.

The Slippery Jack should be well washed as the slimy surface can collect debris and the surface of the cap should be peeled before eating. There are some reports of gastro-intestinal discomfort which is attributed to the surface of the mushroom. In Poland, Belarus and Sweden there were indications of mercury present in the dried mushrooms however, providing the fresh intake of slippery Jack does not exceed 300g per week, it is thought that in the absence of ingestions of mercury in the diet elsewhere, that this would not breach the recommended intake values for mercury [2.].