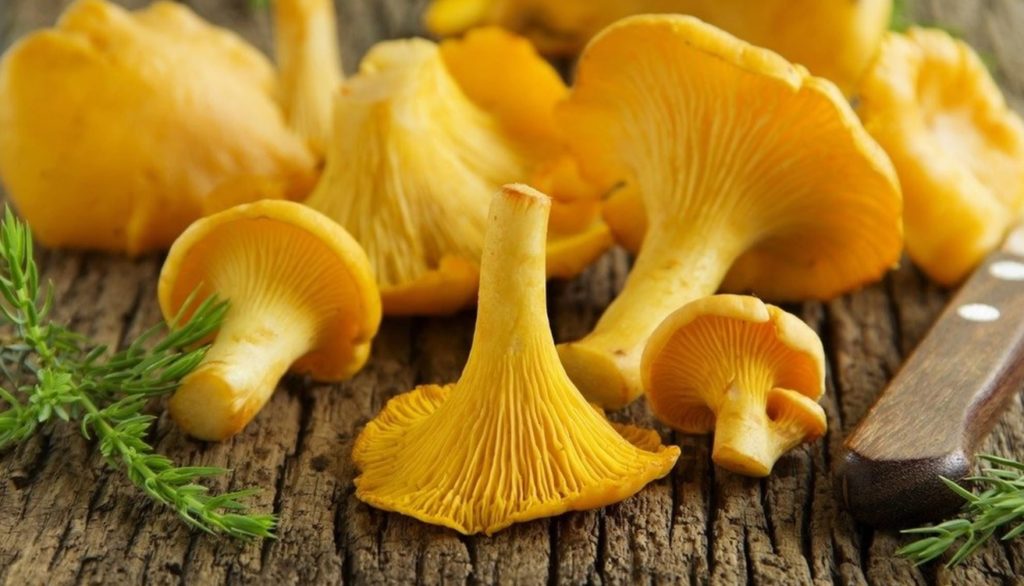 The Chanterelles[i] are a group of exotic mushrooms prized for their flavor and for their distinctive, attractive shape. Medicinal value is possible and suggested by some preliminary studies, but has not been confirmed.

There are many species of chanterelles, and while they are not interchangeable from a culinary standpoint, they are similar. No Chanterelle is toxic, but they do have toxic look-alikes that could sicken the unwary.

Chanterelles as such belong to the genus Cantherellus, but members of another genus, Craterellus, usually called trumpets[ii], are very similar and also edible, and both genera belong to the Cantherellaceae family. Though trumpets usually have thinner flesh than Chanterelles, there is no absolutely reliable, non-microscopic distinction between the two groups, and some species have recently been moved from one to the other based on genetic studies. The common name, “Chanterelle,” is also applied to some trumpets. It therefore seems reasonable to include the trumpets[iii] in a discussion of the Chanterelles.

Note that the name “trumpet” is sometimes applied to some of the oyster mushrooms, which are neither closely related nor similar to the Chanterelles.

Cap: The cap is not distinct from the stem, in most cases. Instead, the stem flares out like a vase and becomes the cap. The top may be anywhere from almost flat (as though the vase were full to the brim) to deeply indented (as though the vase were empty), depending on species.
Gills: There are no gills. The spores are released from the outside of the “vase,” usually from raised, branched structures that may be low and veinlike or deep and gill-like, or anywhere in between. Some species have almost smooth outsides. No chanterelle or trumpet has true gills, however.
Smell: Many species smell sweet or fruity.
Edibility: Most are considered choice.
Habitat:  Chanterelles are mycorhizal, meaning they grow in partnership with tree roots and are therefore found fruiting from the ground near trees, but never directly from wood.

Chanterelles and trumpets together have a very distinctive look. The lack of true gills particularly makes the group easy to recognize—determining which member of the group one actually has is much harder, though, in part because, as in so many other fungal groups, the taxonomy is in flux. There are species that have recently been divided into whole groups, species that have been re-categorized, and doubtless species that haven’t been described yet.

The important characteristics to look at are the height of the spore-producing ridges and the color of the different parts of the fruiting body, but these are variable even within a single species and in any case difficult to describe with any precision. For example, the ridged spore surface turns slightly pinkish with maturity in some species, but the color can be difficult to see except in strong light, and some people question whether “pink” is really the right word for the color at all. Spore print color can also be important, but prints of various colors can look white unless the print is heavy enough.

It’s not that Chanterelles can’t or shouldn’t be identified to species, they can and they should, it’s just not always a straight-forward process.

The following is a partial list of Chanterelle and Trumpet species.

This is THE chanterelle, the one all the others are named after, so it is sometimes just called “chanterelle,” without an adjective. It is more or less orange to yellow, and has an apricot-like scent[iv]. Until recently, it was considered to have wide range across Europe and North America, but the North American population has now been split into multiple species that are not yet well described[v]. Any member of the group can still be called golden chanterelle, if one is speaking casually. 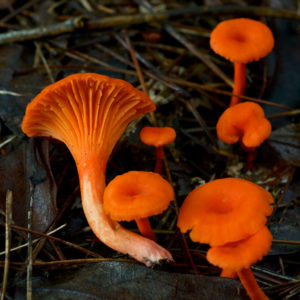 This one is noticeably smaller than the golden and has a color ranging from bright pink to deep reddish-orange. Its culinary uses are the same, though it’s not as well known[vi]. Incidentally, “cinnabar” is a red mineral ore from which mercury is derived. 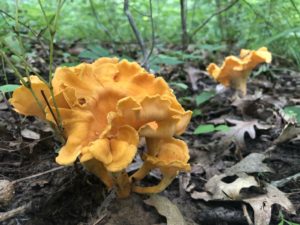 Another yellow to yellow-orange, apricot-scented, species, but this one has an almost smooth spore surface, with only very slight wrinkles. Unfortunately, the height of the wrinkles and its color both vary, making it hard to differentiate from several other species—and raising the possibility that it, too, is actually a group of species[vii]. 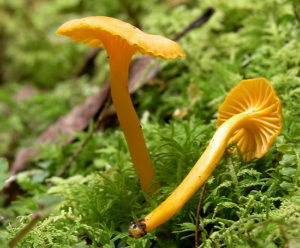 As the name implies, this species[viii] is very small with a thin, proportionately very long, stem—somewhat like a flat-head nail. The stem can be hollow. It can be easily confused with unusually small examples of golden chanterelle. 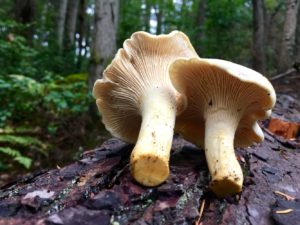 The white chanterelle[ix] is larger than most of its relatives and white or whitish in color. Older specimens, or those that have been handled, may stain yellowish. This species is found almost exclusively in old-growth forests, not in younger second growth. Whether this means the fungus cannot live in young forests, or if its fruiting is simply delayed until old-growth status is reached is not clear. 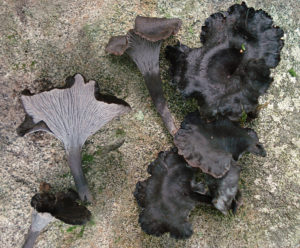 This is one of several species[x] referred to as “black trumpet.” Unfortunately, finding any information on this one individually is difficult. It is dark gray to black, with a white bloom on the sides where spores are produced. 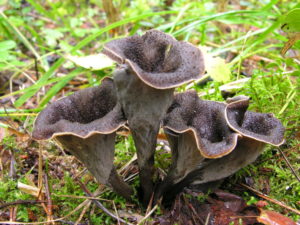 This is another “black trumpet.”[xi] It, too, is black but develops a white bloom as the spores mature. It is one of those where the “vase” appears empty. It’s a European species, but has several North American equivalents. 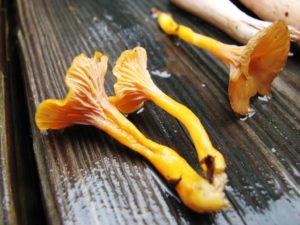 This one, also called yellow foot or small chanterelle[xii], is almost as small as the other small chanterelle already listed, and it develops a distinct hole in the top, like a very narrow interior of the vase. It is yellow, but sometimes its sides, where its ridges are, become pink or pinkish with maturity. 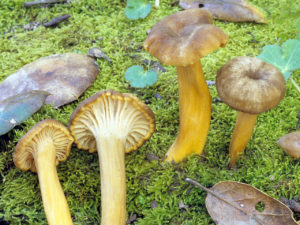 Another yellow foot! This one is also called the winter mushroom[xiii]. The base of the stem is yellow, the top of the cap is brown, and the sides are gray. It might actually be multiple species.. 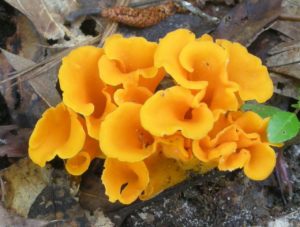 Despite the name, the fragrant chanterelle[xiv] is not especially fragrant, nor is its scent distinctive within the usually good-smelling chanterelle group. It has thin flesh and a deep, empty vase shape, like the black trumpets, but is a bright yellow-orange.

Besides the trumpets, which arguably are just alternate chanterelles, there are a few other mushrooms that are sometimes mistaken for chanterelles. Some are edible, others are not. The key to avoiding confusion is to remember that chanterelles do not have true gills, do not have scales, do not grow on wood, and most have unbranched stems. Also, remember that even an expert can make a mistake through inattention to detail.

Blue chanterelles[xv] are not currently listed in the same genus, or even the same family, as the true chanterelles, but their fruiting bodies do have the same vase-like shape. Their flesh is brittle (most chanterelles are somewhat fibrous, almost like string cheese) and the blue to black color is distinctive. The stems branch, producing clusters of caps. An online search on their toxicity yields websites listing recipes, so apparently people do eat them.

The genus, Gomphus, has been divided into several not-very-closely-related groups now collectively referred to as the gomphoid[xvi] mushrooms. Though members of a different taxonomic family, the Gomphaceae, they closely resemble chanterelles and trumpets. They differ in having either scaly upper surfaces or branched stems. Their spores are also rough, while those of the chanterelles and the trumpets are smooth. Some members of the group are definitely toxic, but others are regularly eaten without apparent ill effect—a difference that could depend on cooking technique or other factors as much as on the biochemistry of the fungus[xvii].

The false chanterelle[xviii] is, as the name implies, similar in size, color, and sometimes shape to the golden chanterelle, and is sometimes confused with it. A close look easily distinguishes the two, however, since the false chanterelle has true gills, not false gills or ridges, and is umbrella-shaped not vase-shaped (the center of the cap may sometimes be depressed enough to vaguely suggest a vase). The cap surface is also velvety in texture, whereas all the chanterelles and trumpets are smooth, and the false chanterelle is not mycorhizal but feeds instead on well-rotted wood and woody debris.

Some people eat this species with no problems, although it reportedly doesn’t taste very good, but there have been reports of gastrointestinal upset and occasionally hallucinations. Worse, it could easily be confused for the seriously toxic jack-o-lantern.

The eastern jack-o-lantern[xix] is another that can be confused with the golden chanterelle largely because of its orange color, though mature specimens can develop a vase-like shape as the edges of the cap turn up and become thin and wavy. The stem is thicker at the top as well. But it, too, has true gills and a fondness for growing on wood. Its claim to fame, aside from it’s resemblance to a chanterelle, is that the gills can sometimes glow in the dark.

It’s also toxic, and is the primary reason why no one should eat false chanterelle, which it resembles quite closely (the main differences are its smooth surface and the fact that its gills do not fork). While it rarely kills those who eat it, the symptoms are reportedly severe.

There are multiple, very similar Omphalotus species, any of which could be confused for a golden chanterelle by the unwary.

The golden chanterelle has been the subject of recent scientific study suggesting that certain of its extracts have immunoregulatory properties[xx],  antioxidant activity[xxi],  antimicrobial activity[xxii], and other potential benefits. However, in all cases, the studies involved either chemical analysis alone or chemical analysis in combination with in vitro studies, not human or animal subjects. While it seems possible that effective medications can be derived from golden chanterelle (and possibly from its close relatives), it hasn’t been done yet. Whether eating the mushroom could have a medicinal benefit is also unclear.

The idea that chanterelles make healthy food is more definite[xxiii], since they are low in total calories and fat and high in copper, niacin, pantothenic acid, and vitamin D. While a large portion of the mushroom’s total calorie count is from protein, there are so few calories in a serving that the total amount of protein is low. Like most mushrooms, the chanterelle is mostly water.

Any food can cause allergic reactions to sensitivities in some individuals, but the primary danger with chanterelles is that of mistaken identity. Jack-o-lantern is the most likely toxic look-alike, but other, perhaps dangerous mistakes are possible. The key is to not underestimate the ability of humans to make mistakes, even obvious-seeming mistakes. It is important for foragers to take the time for careful identification.