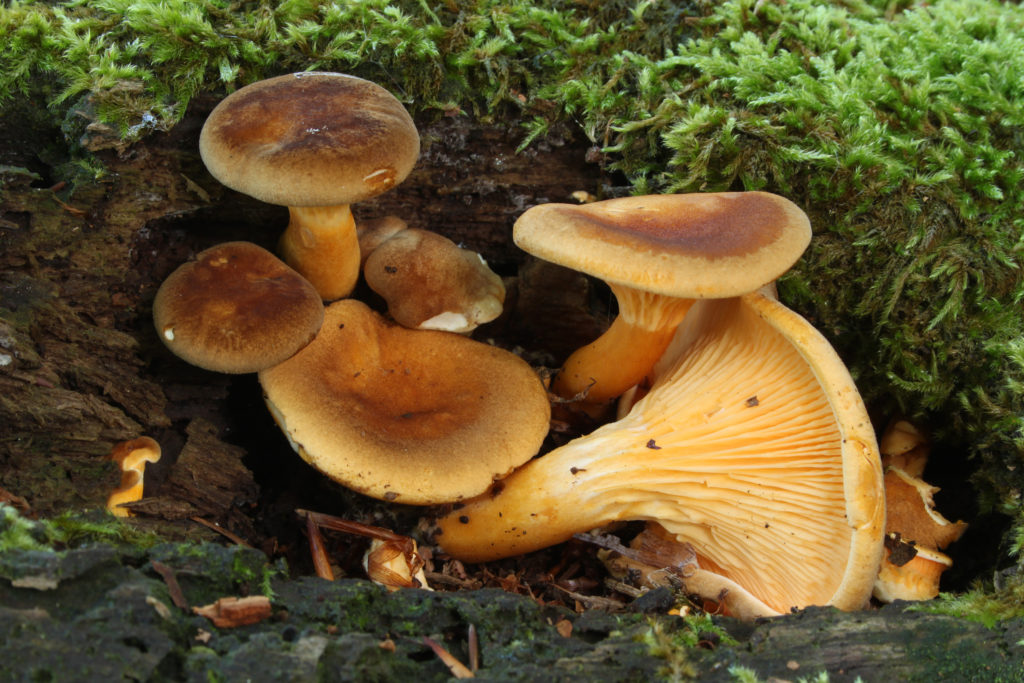 The resemblance to the jack-o-lantern mushroom is closer; the one could be mistaken for the other. Jacks are poisonous. Whether false chanterelles are poisonous is hard to say, since some people eat it without difficulty (the flavor is reportedly poor, though), while others become mildly ill[ii]. While research suggests the species could be a source of some medically useful substances, it is not currently regarded as medicinal, nor is it widely used in any way.

False chanterelles grow across much of North America and Europe.

Cap: Small to mid-sized, either flat or slightly depressed, pale yellow, orange, orange-brown, or, when older, yellow-brown. The surface is dry, soft, and very slightly velvety. The interior flesh is thin and whitish.
Gills: Orange, soft, crowded, and forked. The gills run partially down the stem.
Stem: Short, thin, and often slightly off-center. Usually orange, or whatever color the cap is, but can turn brown.
Smell: Either “mushroomy” or odorless. Two look-alikes, the golden chanterelle and the jack-o-lantern, each do have distinctive odors, making odorlessness a good field mark.
Taste: Not distinctive for ID purposes.
Spores: Ellipsoid, smooth, often dextrinoid.

Spore color: White
Edibility: Not recommended.
Habitat: Eats woody debris, such as forest litter or woodchips. Only colonizes logs and stumps when these are already well-rotted. Often, but not always, under conifers.

Although the false chanterelle is not as difficult to identify as the name would imply, three sources of potential confusion are worth noting. First, the color is highly variable and not a reliable field mark. Second, the species has had many different scientific names over the years, reflecting shifting ideas about what other species this one is related to[iii]. So, for example, some older sources might actually list this species as an odd kind of chanterelle, or it might be listed as part of half a dozen other groups. Third, the false chanterelle is one of several closely-related and very similar species that may or may not be properly differentiated by writers on mushrooms[iv].

When learning to identify mushroom species, it’s important to make sure your information source is correct and up to date.

While few people seek the false chanterelle for its own sake, beginners interested in real chanterelles should definitely learn the difference.

Some research suggests that the false chanterelle could be a source of an anti-cancer drug[v], although since many experts recommend not eating this mushroom, the question is moot for consumers. Similarly, there is little point in detailing the nutritional benefits of something that should not be eaten.

False chanterelle is not currently used medicinally, so there is no dosage recommendation.

Although some people eat false chanterelle without ill effects, others are mildly sickened. There are also unconfirmed reports of hallucinations in people who ate this mushroom[vi]. While the false chanterelle can’t be definitively said to be poisonous, it’s not recommended, and reportedly tastes terrible anyway.

Note that while some people seek hallucinogenic mushrooms deliberately, this is not a good one to seek; the reports of hallucinations have not been confirmed while the reports of illness have been.