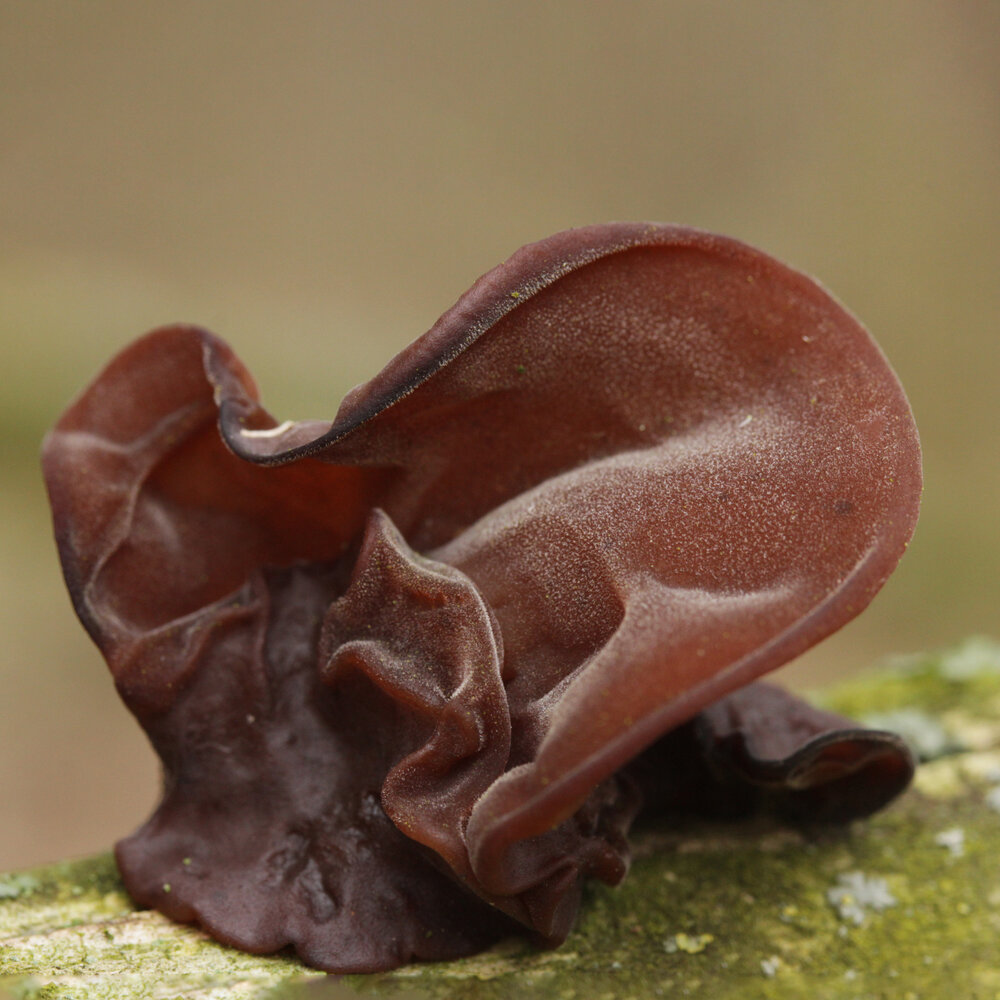 Auricularia Auricula-Judae or the wood ear[i] is an odd-looking fungus with a long list of common names, including black fungus, jelly ear fungus, Judas ear, and the truly unfortunate moniker, Jew’s ear. The fruiting body does, indeed, often resemble a human ear growing out of a tree and has a very rubbery texture, like gummy candy. And yet this rubbery ear can be eaten and has been cultivated for food in China for centuries. It’s often available dried, when it loses its rubbery quality and turns black.

Where the wood ear lives is a difficult question[ii]. It is Eurasian, but up until recently it was thought to have a North American distribution as well. Now, the North American wood ear appears to be not one but two or even three species, not all of which even have names yet, none of which are now included as A. auricula-judae. Older sources lump all these species together, and some newer accounts could as well, if the authors drew from older information. As result, it can be difficult to tell which species is actually being discussed. The species of the North American complex are almost impossible to distinguish from each other or from true A. auricula-judae without a microscope, and how they might differ from each other biochemically is not clear. Cultivated wood ear may also differ from the wild form biochemically, either because of its genetics or because of its diet (typically sawdust and gain, not solid wood). There are more distantly-related look-alikes as well, though experienced foragers can spot the difference without much trouble.

The wood ear[iii] is an exotic mushroom valued largely for its culinary qualities, but has been used traditionally as medicine in both Asia and Europe, and it does contain potentially medicinal substances. To what extent eating whole mushroom might have a therapeutic effect is not clear.

Cap: There is no cap per se. The entire fruiting body is a thin, irregular disc (may be ear-shaped) that is rubbery or gelatinous in texture and reddish-brown in color. One side, generally the upper side, is smooth. The other side is very finely hairy and may appear whitish as a result.
Gills: There are no gills. The slightly hairy surface produces spores.
Stem: There is no stem. The fruiting body is attached to the substrate directly, either by the edge or by the middle.
Smell: Nothing distinctive.
Taste: Nothing distinctive.
Spores: Smooth, rounded
Spore color: White
Edibility: Edible
Habitat: Eats dead wood (including dead parts of living trees, but never living wood), though different members of the species complex have different preferences as to type.

The color is somewhat variable, but is generally in the neighborhood of pinkish or yellowish brown. The shape, too, varies, and can be circular, ear-like, fan-shaped, or something else. The edges are often wavy. There may be several in a group, but the clusters are not dense or fused, as in some close look-alikes. While jelly fungi are distinctive, wood ear is hardly the only one, so mixing up species is possible. An inexperienced person could also mistake one of the rock tripe lichen for a wood ear, for while texture is very different, the shape and even color can be similar. Dried wood ears can closely resemble dried rock tripe.

When considering the benefits of any Auricularia species, it’s important to keep the taxonomic confusion around the genus in mind—it’s possible that a benefit reported for one species actually belongs to another. That being said, wood ear has a long history as a medicinal[iv], and some of its uses are being confirmed, or at least supported by modern research[v].

An extract of wood ear was shown to be able to reduce a key part of the inflammatory response in an in vitro experiment using cultured mouse cells[vi]. Inflammation does not refer only to the swelling following an injury or an allergic reaction, but is rather a process by which the body responds to many types of stress but which also causes damage. Inflammation is part of the development of many different kinds of illness, so anti-inflammatories have broad medicinal applications.

Wood-ear polysaccharides also showed anti-coagulant effects similar to those of aspirin, both in vitro and in rats[viii]. Whether this species has anticoagulant properties when the whole mushroom is eaten, as one of its close relatives does (see section on side effects), seems unclear.

In one study, rats fed a high cholesterol diet remained much healthier if they were also given an extract of wood ear. In previous studies, anti-cholesterol properties had appeared to be associated with the species’ polysaccharides, but in this study polysaccharides were excluded from the extract, meaning they cannot be the only substance in the fungus capable of lowering cholesterol. Polyphenolic compounds appear to be responsible for the effect, either alone or in addition to the polysaccharides identified in the earlier study[ix].

An extract from wood ear was found effective against cancer cells of two different lines in in vitro tests. Curiously, although several specific substances within the fungus were found to have anti-cancer effects, none were as strong alone as an extract of the whole fungus.[x]

Wood ear[xi] doesn’t taste like much; it’s used in cooking for the chewy texture, and because it can take on the flavor of what it’s cooked with. Therefore serving sizes are quite small, closer to what you’d expect for a condiment or a garnish than for a vegetable. The fungus is not, therefore, a significant source of calories or energy, but it can be a significant source of both Vitamin B5 and copper, with smaller but still-helpful amounts of selenium and Vitamin B2. They contain no salt or fat—pretty good, for a condiment!

While wood ear and wood ear products are sold for medicinal purposes, dosing should be left up to an experienced practitioner. Because wood ear is also eaten as food, over-dosing on whole mushroom (that is, not a concentrated extract) should not be much of a concern. See the section on side effects, however.

However, even aside from the recently-discovered taxonomic confusion in North America, this species is part of a group of closely-related, very similar fungi, and it is often difficult to tell which one a writer is talking about and whether they might have gotten the species mixed-up. The confusion often involves A. auricula-judae and another Asian species, A. polytricha. Both are used in Chinese cooking, and while they are not interchangeable in recipes, recipe books are often somewhat less than clear about which one is called for. Both are sold for food, and either could be called “wood ear”. And at least one of them has potentially dangerous side-effects.

Specifically, one or both of them are anticoagulant; people who eat it feel fine, but may bruise or even bleed easily for days or weeks afterwards, a serious problem for anyone who already has difficulty clotting, takes a prescribed anticoagulent or daily Aspirin, or goes in for surgery. Most likely, A. polytricha[xii] in the culprit, but sources do differ on the subject. Some also suggest that one or both could interfere with “fertility” and therefore should not be eaten by people trying to conceive or by pregnant women[xiii].