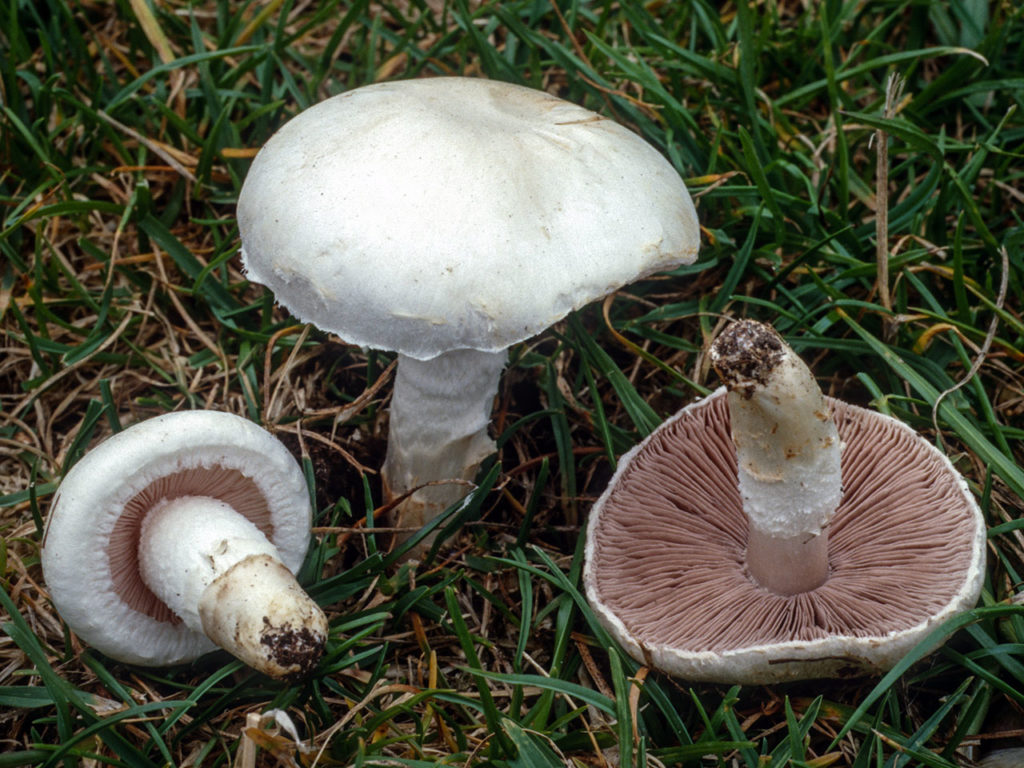 Generally, meadow mushroom grows from late summer/fall after rains, as its Latin names suggest, it grows in meadows, fields, and other grassy areas like playing fields, alongside paths and parks. Agaricus campestris can look stocky in structure and a ring/skirt around the stem may be present early; the ring appearance does not remain although a trace may be seen. Some report that the over-hang of the cuticle over the cap is a good indicator for the identity of the meadow mushroom.

Cap: Fleshy white cap; 3-10cm diameter; the cap is a hemisphere in shape flattening more as it matures.
Gills: Radiating gills; crowded and free from the stem; the gills are pink gradually progressing in time to a dark-brown.
Stem: The stem elevates the cap; 3-10cm tall & approx. 1-2cm in diameter; the stem may look like a fleshy light pink. The appearance may be smooth or scaly.
Smell: Mushroomy.
Taste: Described as pleasant.
Spores: 6.5–8.5 x 4–5µm; microscopic examination of the spores is necessary to accurately confirm its identity.
Spore color: Dark brown.
Edibility: Edible.
Habitat: On soil in grassy areas such as lawns, fields and meadows. Found in small clusters or solitary, and sometimes in ‘fairy’ rings.
Ecology: Saprobic.
Scientific Classification: Phylum: Basidiomycota; Class: Agaricomycetes; Order: Agaricales; Family: Agaricaceae; Genus: Agaricus.

Agaricus arvensis (the Horse mushroom) although larger than Agaricus campestris has a similar white cap until it matures when it becomes more yellow. Amanita virosa is similar to Agaricus campestris but is toxic and as such can be referred to as the ‘destroying angel’; therefore, caution should be taken when foraging for wild mushrooms [3.] Agaricus xanthodermus (the yellow stainer) is similar but can cause stomach upset and stains a yellow color when bruised [4.]

Extracts of Agaricus campestris are described for its use in cosmetics (named as Psalliota campestris), in particular for its skin conditioning properties [5.] Interestingly, it has been described as a bio-indicator for trace concentrations of silver found in its growth medium [6.]; furthermore, meadow mushroom may have the potential for use in soil decontamination following environmental exposure to engine oil [7.] Further research is required but this may provide novel properties for fungi, and/or this genus or species in particular, in environmental clean-up tasks.

The Agaricus genus comprises of some mushroom species that have been reported to have multiple medicinal benefits.  As far back as the 1950s, Agaricus campestris had positive effects in Calcutta in the treatment of typhoid [8.] Since then further work has identified other potential therapeutic benefits including as an anti-oxidant, cytotoxic mushroom, a blood glucose regulator and an anti-microbial. From a nutritional perspective, the fatty acid composition in the fruiting body has shown that the dominant fatty acid was linoleic acid [9.] Linoleic acid is an essential fatty acid required as a component of the human diet.

Oxidative stress and damage can lead to a progression of diseases such as cancer. Hydrogen peroxide is one of the most aggressive of the free radicals that can cause cellular damage and Agaricus campestris was shown in the presence of hydrogen peroxide to reduce the cellular damage and death of cells they were exposed to [10.] Providing an important natural possibility for oxidative damage protection.

The cytotoxic effect of Agaricus campestris was evaluated using cancer cells for larynx carcinoma (HEp-2) and breast carcinoma (MCF-7). When compounds were extracted using hexane as the solvent, a cytotoxic potential was observed indicating its ability to cause cell death in these cancer lines in vitro [11.]

Early studies looking at insulin release from rat pancreas islet cells show that Agaricus campestris stimulated the release of secretions that regulate blood glucose levels by having opposing effects – insulin and glucagon [12] Insulin and glucagon reduce and increase blood glucose levels respectively. Administration of Agaricus campestris to a diabetes-induced mouse model in both drinking water and diet led to a decrease in the induced hyperglycaemia. By day 12, the levels were very similar to those of the non-diabetic control mice. The dose was 62.5 g/kg of diet and 2.5 g/l in place of drinking water [13.] Glucose uptake and metabolism is dysfunctional in diabetes and in vitro, Agaricus campestris increased both glucose uptake and stimulated conversion to glycogen (glucogenesis). The results using Agaricus campestris alone were not dissimilar to those when Agaricus campestris was administered in conjunction with insulin.

Agaricus campestris is an edible mushroom with valuable nutrients; however, these values can vary between mushroom species due to the wide-ranging diversity of compounds and the solvent used in the extraction process [11.]

Agaricus campestris has long been known for being edible and non-toxic [8.] It is necessary to be certain, however, that it is the correct species of meadow mushroom (Agaricus campestris) before eating to avoid being in contact with toxic species.