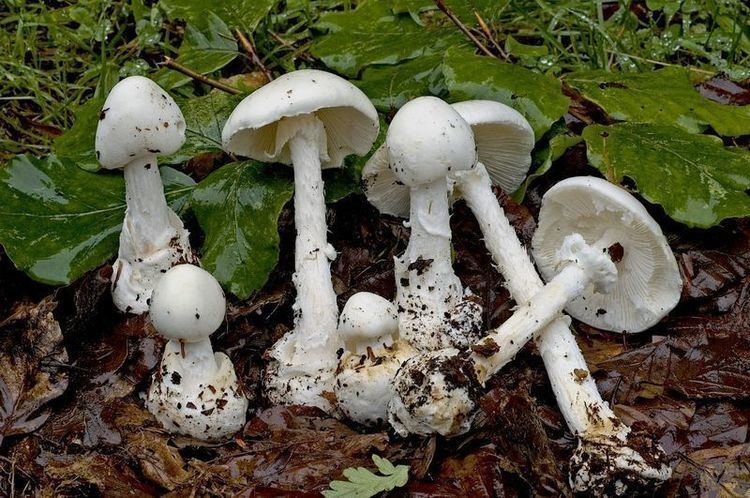 The white-capped species of Amanita virosa was first described by the notable Swedish botanist and mycologist Elias Magnus Fries as it is found throughout Europe and particularly in the woodlands of Scandinavia. However, it was not until 1836 that this species got its present name in a French publication by Louis-Adolphe Bertillon.[i]

The genus of Amanita contains a few delicious species as well as some of the deadliest. Unfortunately, Amanita virosa, commonly known as The European Destroying Angel, is one such deadly species that has led to the demise of many a keen amateur mushroom-enthusiast and even an occasional mycologist. The “deadliness” of Amanita virosa comes from its two particular characteristics; one, it contains a highly potent toxin; and two, it can be very easily be confused for other edible white-capped species. Therefore it is highly appropriate to discuss the descriptive characteristics of this species which can help set it apart from other edible mushrooms as well as talk about the serious systemic toxicity that can follow its accidental ingestion.[ii]

Cap:  The cap of this species is bulbous or dome-shaped when young, but as it ages the cap become campanulate (bell-shaped) or even almost flat with a central lump called an umbo. When young, the remains of the volva can sometimes be present, but as it matures the remains get washed off leaving behind a slimy vicious surface when wet that becomes smooth and dry as the cap dries. It is pure white in color, but with age yellowish or pale orangish tan tints can occur near the umbo. The cap is irregular in shape with non-striated and non-appendiculate margins and is often tilted on the stem. Lastly, concerning its size, the width of the cap can expand to 5 to 12 centimeters.
Gills: The gills are white like the cap. They are crowded and free (meaning not attached to the stem).
Stem: The stem of the European Destroying Angel is 0.5 to 16 centimeters tall and 0.7 to 2 centimeters wide. It is cylindrical, fibrous, and hollows with age. In color, it is pure white like its cap. On the upper quarter of the stem, there is a large, flaring (skirt-like), yellowish, fragile, membranous annulus (ring). While at the bulbous base, sometimes even buried just below the soil, a large, membranous volva (sheath) can be found.
Spores: Spores of Amanita virosa are spherical or subglobose to ellipsoid. They are 7 to 8 micrometers in diameter.
Spore Print: The spore print of this species in white.
Smell: This species’ botanical name of “virosa” is derived from its characteristic sweet odor. Amanita virosa has a strong, unpleasant sickly sweet smell that is said to resemble that of an old rose or honey.
Flavor and Edibility: This species is NOT EDIBLE as it is DEADLY POISONOUS.
Habitat and Range: The European destroying angel fruits from summer to early fall. It is only found in Europe, in high altitude mixed, hardwood, or conifer forests of Great Britain and Ireland as well in similar woodlands of Scandinavia. Amanita virosa grows in singularly or small clusters on the ground often near the root systems of trees.

The species of Amanita virosa is not found in North America, however, other poisonous species of the genus Amanita such as A. bisporigera, A.  abrupta, A. phalloides, and A. verna which grow throughout America and can easily be confused for A. virosa.  Unfortunately, differentiating Amanita species in the field is very difficult on physical characteristics alone, but can readily be differentiated by chemical and microscopic characteristics. For example, potassium hydroxide (KOH) can be used to distinguish A. virosa from A. verna. When KOH is applied to the flesh of these mushrooms A. verna will not react, while A. virosa will instantaneously turn yellow in color.

The young caps of the European Destroying Angel can also be mistaken for the edible Agaricus sylvicola, commonly known as the wood mushroom. These two species can be distinguished from each other by their gills. The gills of Amanita virosa are pure white, whereas the gills of Agaricus sylvicola are initially pink and brown with age.

Lastly, the numerous species of Puffballs can be mistaken for unopened caps of an Amanita. Therefore, great care should always be taken when collecting white mushrooms near trees or when picking what appear to be puffballs.

Amanita virosa is highly toxic and can cause death when ingested.

The European Destroying Angel produces several toxins, namely Amatoxins (amaninamide and alpha-amanitin), Phallotoxins (phalloidin and phallacidin) and Virotoxins (toxovirin). These chemical toxins have a variety of harmful effects on the cells of the human body that range from disruption of cellular replication through inhibition of RNA polymerases to the alteration of normal cellular structure and function through disturbing of calcium homeostasis and interaction with structural actin monofilaments. Although, all cells can potentially be affected by these toxins, the liver and kidneys are primary targets. Furthermore, they are heat-stable and can therefore resist elimination from grilling, boiling, frying, and steaming.

Amanita virosa poisoning usually occurs in three stages, being observed from 8 to 12, 12 to 48, and 72 hours after ingestion. During the first stage, gastrointestinal symptoms predominated and can include nausea, vomiting, abdominal pain, diarrhea, and vertigo. The second phase is characterized by alleviation these of symptoms which gives the individual a sense of false safety, as liver and kidney failure are insidiously on setting. Lastly, the third phase is characterized by coagulopathy of liver failure manifested by bleeding from the nose, vomiting of blood, blood in urine, and blood in stool; as well as encephalopathy manifesting as muscle twitching, alteration of sensorium, seizures, and even coma. Death usually follows the third phase if the individual does not receive rapid and adequate medical care.

Unfortunately, there is not much that can be done for Amanita poisoning as no specific antidote is available. The majority of medical treatment depends on supportive measures and gastrointestinal decontamination if possible. As such, it is highly important that individuals have adequate information regarding Amanita virosa so that they can correctly recognize it and avoid it to prevent accidental poisoning.[vi]