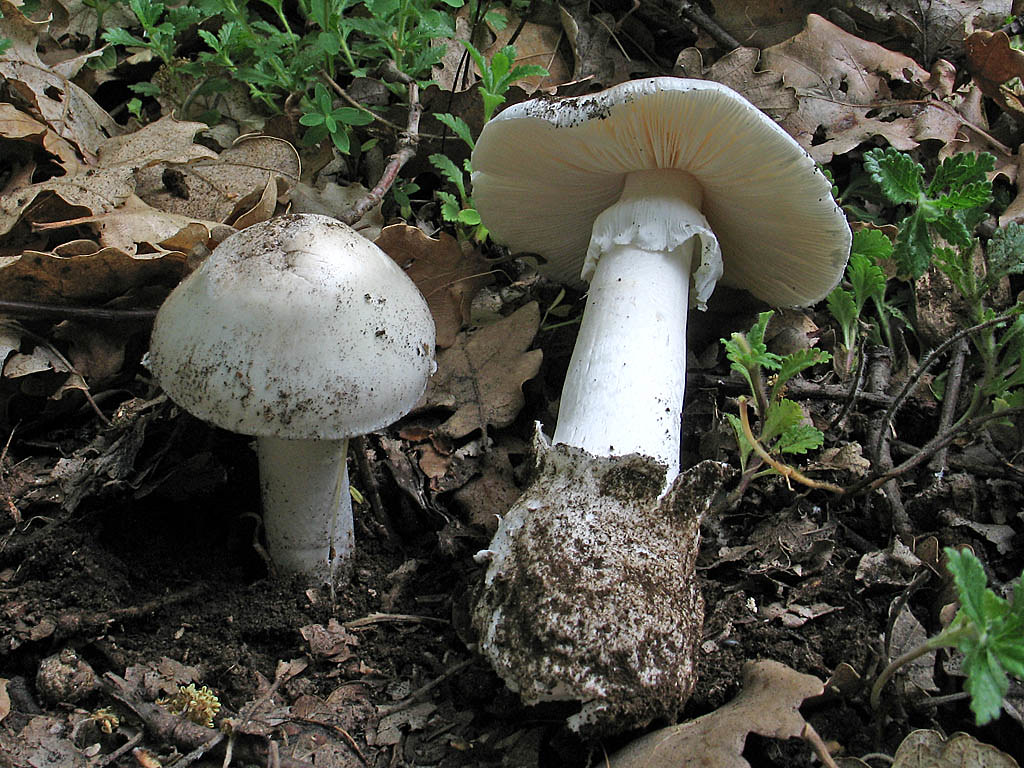 Amanita verna with its completely white appearance is one of the most beautiful, yet deadly fungi found in the forests of Europe and rarely the Western United States.

The first description of this species was by the French physician and botanist Jean Bulliard in the late 1700s. Bulliard termed the species Agaricus bulbosus f. sp. vernus on account of the fact that it grew in the hardwood forests surrounding Paris in the springtime (Lat. Verna = spring).[i]

As mentioned Amanita verna is one of the most deadly mushrooms. The toxicity of this mushroom comes from the presence of a group of potent hepatotoxic (liver-damaging) compounds called amatoxins which can lead to irreversible hepatic and renal failure.

Additionally, quite a few species of both edible and poisonous white-capped mushrooms closely resemble Amanita verna. For example, several white Amanitas such as A. virosa (Destroying Angel), A. bisporigera (Two-spored Death Angel), A. tenuifolia ( Slender Death Angel), as well as white or nearly white specimens of A. phalloides (Deathcap) which are just as toxic as A. verna can be virtually indistinguishable from it without microscopy and extensive experience. The unfortunate use of these mushrooms through mistaken identity is common enough and has led to the death of many a keen amateur mushroom enthusiast and even an occasional mycologist. Thus, due to the ease of confusion, extreme toxicity, and one-way finality of its effects, all are encouraged to use extreme measures in order to avoid consuming Amanita verna and other mushrooms which could possibly be confused with it. [ii]

Amanita verna is a medium to large pure white mushroom with a smooth cap on a slender, bulbous stem; a sac-like volva ensheathing a swollen stem base; and a large skirt-like ring around its stem.

Cap: The cap of this species is ovoid when young, but becomes convex to bell-shaped with increasing age. The surface of the cap is shiny and smooth to minutely fibrillose; however, becomes viscid and sticky when wet/moist. Margins of the cap are non-striate and non-appendiculate. The flesh is approximately 3 to 5 mm thick, firm, and pure white. The cap measures 4.5 to 10 cm in diameter. Cap turns a yellow color when KOH is applied to it.
Gills: The gills are close to crowded, free but nearly adnate to the stem, and tapering towards the stem. The gills are white to creamy white.
Stem: The stem is cylindric or tapering upwards from a rounded bulb. It is stuffed and then becomes hollow. The surface is white and can be somewhat scaly on mature specimens. On the upper part of the stem, there is a membranous annulus/ring which drapes down like a skirt. This species has a membranous, cup-like volva, with a wide, often lobed limb that is free from the stem. The stem measures 6 to 15 cm long by 0.8 to 2 cm thick at the apex.
Spores: Spores of Amanita verna are broadly ellipsoid to short ellipsoid, infrequently elongate, and amyloid. Spores measure 9-11.5 by 7-8.5 µm.
Spore Print: The spore print of this species in white.
Smell: Amanita verna can have no odor at all, but mature specimens have a strong, unpleasant nauseatingly sweet smell.
Flavor and Edibility: This species is NOT EDIBLE as it is DEADLY POISONOUS and can cause irreversible ORGAN FAILURE.
Habitat: Found on ground solitary or in small groups in hardwood, mixed hardwood, or occasionally coniferous forests.
Fruiting Season: Spring to early summer.
Range: Amanita verna is found all over Europe. Whether this species is found in North America is questionable as multiple mycological sources report contrasting information. The Peterson Field Guide to Mushrooms in North America by McKnight reports that this species can be found in Eastern, Midwestern and rarely Western parts of the United States, while Common Poisonous Plants and Mushrooms of North America by N. Turner and S. Szczawinski report that A. Verna is rare on the East Coast, but occurs on the Pacific Coast, with records from Seattle, Washington, and Vancouver Island, British Columbia.

As mentioned above, one of the factors that make this species dangerous is its close resemblance to other toxic Amanita species and to other edible white-capped species.

At least three other deadly poisonous species of pure white Amanitas resembling A. verna can be found in North America. These three include the Destroying Angel or Amanita virosa, the Two-spored Death Angel or Amanita bisporigera, and the Slender Death Angel or Amanita tenuifolia. In addition, white or nearly white specimens of the Deathcap or Amanita phalloides can closely resemble A. verna. These species mentioned are practically indistinguishable from one another based on field characteristics alone and require the use of a combination of microscopic or chemical staining characteristics for accurate identification.

A. verna may be distinguished from A. bisporigera by the presence of two-spored basidia in the latter species.

A. verna and A. virosa are even more difficult to differentiate from one another. So much so that certain authors considered them the same. Both species change to a yellow color when treated with KOH. They both share a similar range, however, some sources claim that the range of European A. verna extends farther north than that of A. Virosa. Under microscopy, the two species can better be differentiated. The spores of A. verna are ellipsoid rather than globose or subglobose spores of A. virosa.

Confusing Amanita verna for edible species of white-capped fungi is even more dangerous. This deadly white amanita can be confused for the edible Smoothcap Parasol (Leucoagaricus naucia).

White in the young button stage, A. verna can easily be confused for edible flat-bulb mushrooms such as Agaricus abruptibulbus. Although the parts above the ground look alike, the edible flat bulbs lack the volva at the base of the stem which is characteristic of the Deadly Fool’s mushroom.

Amanita verna is highly toxic and can cause death when ingested.

The fool’s mushroom or the spring destroying angel, and other Amanitas are collectively responsible for more mushroom-related deaths than any other species. This is because Amanitas contain two closely related groups of toxins, namely Amatoxins (amaninamide and alpha-amanitin) and Phallotoxins (phalloidin and phallacidin). It is widely accepted that amatoxins, ad not phallotoxins are responsible for the lethality associated with these mushrooms, but this may not be completely true. These cyclic octa- and heptapeptide toxins have several harmful effects on the cells of the human body. They can disrupt cellular replication through inhibition of RNA polymerases and alter normal cellular structure and function by disturbing calcium homeostasis and interacting with structural actin monofilaments.

Furthermore, these toxins seem to have tropism towards the cells of the liver and kidneys, although all cells can potentially be affected. Research also seems to indicate that both amatoxins and phallotoxins are heat-stable and can therefore resist elimination from grilling, boiling, frying, and steaming.

The first stage develops within 6 to 24 hours (usually 10-14 hours). The gastrointestinal symptoms and signs characterize this stage and include dry mouth, nausea, vomiting, sharp abdominal pain, diarrhea often with blood and mucus, and shock. Clinical experience suggests that the longer these initial symptoms are delayed, the better an individual’s chances for survival.

After approximately 24 hours, the second phase of “false recovery” that may last up to four days occurs. During this phase, individuals may experience a period of recovery with symptom alleviation, but in reality liver and kidney failure are insidiously on setting.

Following this period of “false recovery”, occurs the last and the most serious stage of intoxication. This stage is characterized primarily by worsened abdominal pain; coagulopathy of liver failure manifested as bleeding from the nose, vomiting of blood, blood in urine, and blood in the stool as well as hepatic encephalopathy manifesting as muscle twitching, alteration of the sensorium, seizures, and even coma. Death will ensue in seven to ten days due to hepatic, renal, and cardiac failure unless rapid and adequate medical care is not started. The general mortality rate ranges from 20-30%. Children, however, are at much greater risk, with a mortality rate of more than 50%.

It is vital that treatment is started as soon as possible to prevent irreversible damage to the liver and kidneys. There is no antidote to date that is totally effective, this majority of medical treatment for Amanita poisoning revolves around supportive measures and gastrointestinal decontamination if possible. Additionally, minor evidence seems to suggest that both Benzylpenicillin (Penicillin G) and a compound derived from Milk Thistle (Silibum marianum) called silibinin may be useful in Amanita poisoning.