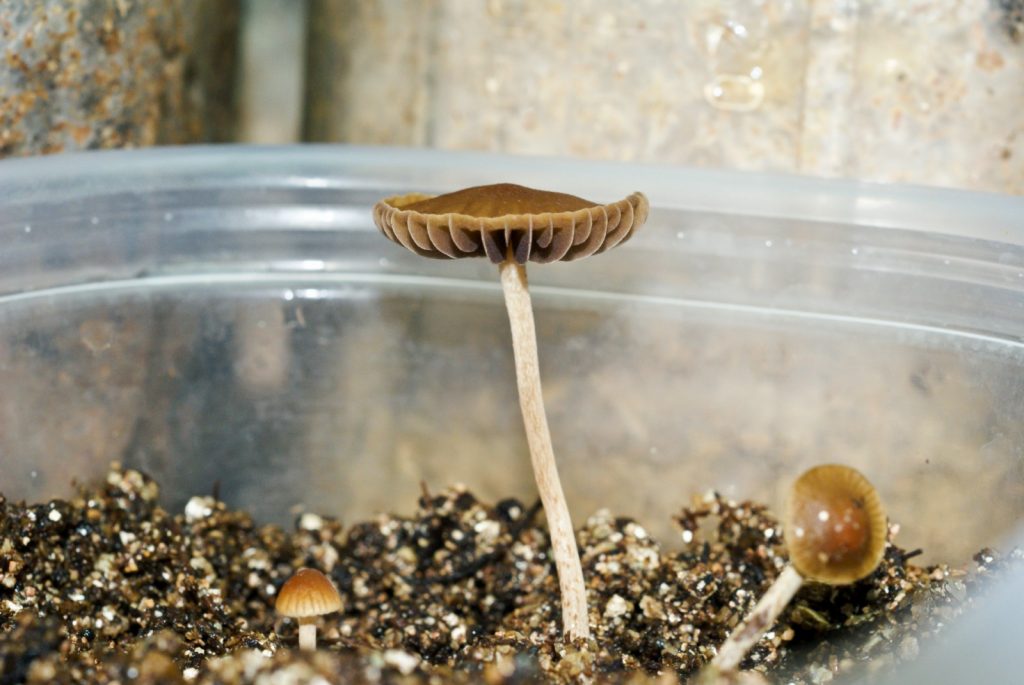 Psilocybe samuiensis is a rare, unique, and perhaps somewhat confusing psychoactive mushroom from the island of Koh Samui, Thailand.[i]

This species was first described in the early 1990s by Guzman, Allen, and Merlin during their ethnomycological investigations on the island of Koh Samui in Thailand. These islands, according to the authors, were known for harvesting and selling psychoactive mushrooms (“hed keequai” which roughly means “mushrooms that grow after water buffalo defecate”) to tourists for non-traditional recreational purposes and using them in meals. Although most of the psychoactive mushrooms harvested by locals such as Psilocybe cubensis, P. subcubensis, and Copelandia cyanescens were known to the mycologists, Psilocybe samuiensis was a species that had been previously unreported but was nonetheless known to local children and farmers who were capable of differentiating it from other Psilocybe species. [ii]

Psilocybe samuiensis is also quite unique. As mentioned, this species was overlooked and unreported until the 1990s. This could have been caused by the fact that it bears resemblance to Psilocybe semilanceata (“Liberty Cap”), sharing macroscopic features and similar coprophilic habitat. However, as it turns out P. samuiensis is quite different from P. semilanceata. When specimens of the mushroom were sent for microscopical analysis to Mexico and Switzerland, the analysis showed that P. samuiensis was microscopically similar to P. mexicana based on its big rhomboid to subrhomboid spores which are used to differentiate the Mexicanae section of Psilocybes from other species. Thus, the prominent Mexican mycologist and expert on Psilocybes Gastón Guzmán concluded that the dried samples of P. samuiensis sent to him “corresponded to Psilocybe mexicana Heim or a very closely related species. This made P. samuiensis very unique, as it became the first species of the clade Mexicanae to have been identified outside of the North American continent or the “New World”. The current explanation for this, offered by Swiss mycologist Dr. T. Stijve, states that this species may either be native to the island of Koh Samui or may have been introduced by travelers from North America. [iii]

Thus, Psilocybe samuiensis is a rare coprophilic, psychoactive mushroom only found on the island of Koh Samui, which resembles P. semilanceata macroscopically but is microscopically similar to Psilocybe mexicana.

Cap: The cap is 7 to 15 mm broad. Convex to conic-convex to campanulate, frequently umbonate with a small papilla. The surface is even and striate near the gill margin. When wet, the surface is viscid with a separable gelatinous pellicle. Strongly hygrophanous, chestnut to reddish-brown to straw-yellow when young, fading to brownish clay color when dry.
Gills: The attachment of the gills is adnate to adnexed. They are clay-colored, when dry the gills turn a violaceous brown or chocolate violet color with whitish margins.
Stem:  The stem is 40 to 65 mm in length and 1.52 to 2 mm thick. It is equal, with a slight subbulbous enlargement towards the base. The stem is hollow. Whitish to yellowish and covered with a fibrillose sheath of veil remnants. Concolorous with cap, characteristically bruising blue when damaged. The partial veil leaves behind a superior, fibrillose annular zone that quickly disappears.
Spore Print: Spore print is purple-brown
Spores: As mentioned previously, spores of Psilocybe samuiensis are characteristically rhomboid to subrhomboid, and size 10-13 by 6.5-8 µm.
Basidia: Basidia are 4-spored
Pleurocystidia: The pleurocystidia are scattered, ventricose (“swollen”) towards the base and sublageniform(“flask-shaped”) towards the apex. 16-20 by 5-6.4 µm.
Cheilocystidia: The cheilocystidia are ventricose at the base and lageniform, narrowing to a flask-like thin neck, often forked. 18.5-30 by 5-8 µm.
Smell and Flavor: The species is reported to have a farinaceous or flour-like smell and taste.
Habitat: In the original text, Psilocybe samuiensis was first found in a solid of mixed sand and clay in rice paddies. After further observations, it was noted that this species was coprophilic or “dung/manure-loving”, however, it did not produce fruiting bodies directly in manure rather it grew scattered or gregarious in well-manured soil of pastures, meadows, and rice paddies.
Fruiting season: This species fruits from July through late August.
Range: Found widely distributed on the island of Koh Samui, Thailand in the Gulf of Siam. It has also been found in Angkor Wat, Cambodia.

The biggest confusion, as mentioned before, is between Psilocybe samuiensis and Psilocybe semilanceata which resemble each other macroscopically and share a common habitat. Fortunately, P. semilanceata can be differentiated from the former species based on the height of their respective stems and the color of their fruiting bodies. For example, the height of P. samuiensis’ stem ranged from 40-65 mm, whereas the stem of P. semilanceata attains heights ranging from 70-110 mm.

Other Psilocybe species such as P. cubensis and P. subcubensis as well as Panaeolus cyanescens also share a common habitat with Psilocybe samuiensis. They can also be distinguished from the latter species based on size and macro-morphological features.

Thankfully mycological literature from the 1990s provides us with information on the content of psychoactive tryptamine indoles found in both naturally occurring and laboratory cultivated samples of Psilocybe samuiensis.

According to a report on the Ethnomycology, biochemistry, and cultivation of this species by Jochen Gartz published in the Journal of Ethnopharmacology, the potency of this particular species according to the local farmers and their children was similar to the mild-altering effects of larger Psilocybe species. Furthermore, the results of a bioassay published in the same study (“analytical method to determine the concentration or potency of a substance by its effect on living organism”) of 25 fresh specimens weighing 6 grams resulted in an “intensely visual experience…”, which according to the authors was “…quantitatively similar to the effects produced by the consumption of equal amounts of specimens of P. semilanceata collected in Germany.”

It is important to remember that the potency and dosage of any given mushroom are dependent on the state of the mushroom (fresh vs dried), method of consumption, individual physiologic variability as well as on the methods, and the environment of growth. As such, it is best to err on the side of caution when experimenting with psychoactive mushrooms and to always start with small amounts, and adjust the amount taken to achieve the desired effect.

Trip effects of Psilocybin consumption vary from person to person but can include both subjective mental and objective physical symptoms and signs. These effects appear approximately within 20-30 minutes of ingestion and last roughly 6 to 8 hours, and are thought to be caused by as yet not well-understood mechanisms that alter brain concentrations of serotonin and produce variable degrees of sympathomimetic effects.

Toxicity and Side Effects

Under normal circumstances, when P. samuiensis and other psilocybin-containing mushrooms are used in moderation, there are few signs and symptoms of toxicity or major adverse effects.

Toxicity can be associated with worsened or exaggerated symptoms and signs above as well as nausea, vomiting, high body temperature, hyperreflexia, loss of urinary control, and even convulsions.

Toxicity may also be experienced if consumption of P. samuiensis is combined with other substances such as cannabis, amphetamines, or alcohol. These substances have similar user’s mood, thought, and behavior and will result in “exaggerated” effects that can be dangerous for the user.

This species has been experimentally grown, but it is not ideal for cultivation as it has a long growth period and often does not produce fruiting bodies.

Experimentally, P. samuiensis was grown on a substrate 2:1:2 mixture of rye/horse dung/water, which produced small fruiting bodies after four months of cultivation, and three weeks after encasing with a 2:1 mixture of peak ad chalk. Attempts to grow this species on a 6% malt agar or Lolium seed/water mixture were unsuccessful, although a small rapidly growing mycelium grew fruiting bodies that developed into sporulating mushrooms never occurred.

P. samuiensisdoes not appear to be commercially available outside of Koh Samui, Thailand. However, it is worth noting that Thailand has a law that prohibits the usage of psychoactive mushrooms (“hed keequai”), with harsh penalties provided for non-compliance. Whether tourists in Thailand have ever been sentenced for usage or possession of mushrooms is unknown, but anecdotal evidence seems to suggest that mushroom usage still continues despite the passage of the law.

If you live outside of Thailand P. Samuiensis probably isn’t the Magic Mushroom for you and you might want to look into buying shrooms from a different species.

[i]       Gartz, J. (2014). Magic mushrooms around the world a scientific journey across cultures and time ; the case for challenging research and Value Systems. Arnshaugk.