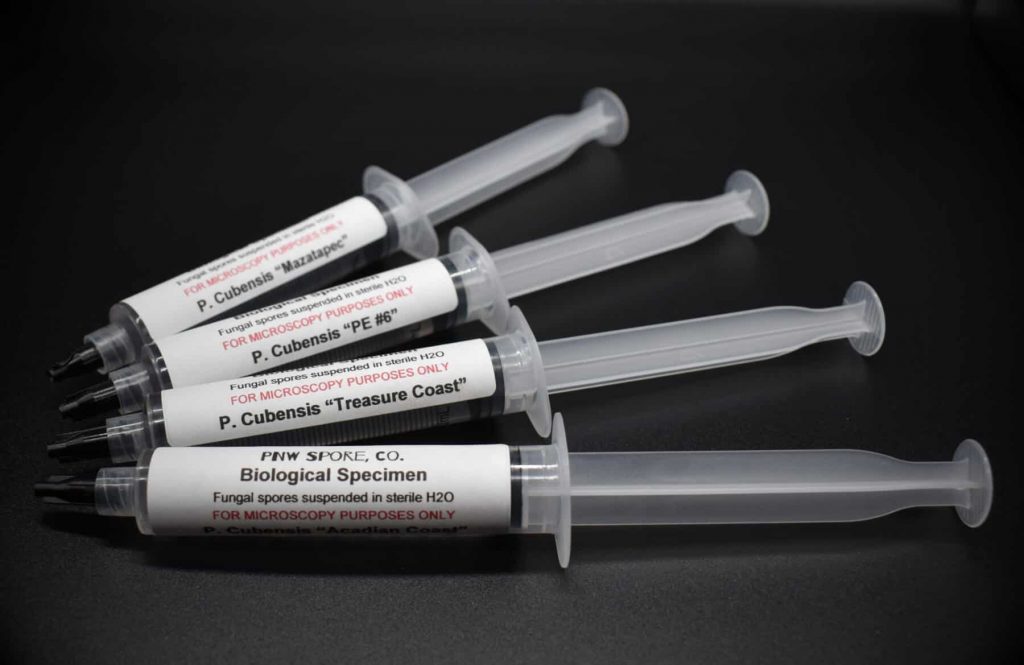 Magic mushrooms are extremely illegal to use or possess, and therefore cannot be bought and sold except on the black market. And yet there are companies selling spores of psychoactive fungus species quite openly online. How? Well, in most jurisdictions, the law says nothing about fungal species—it’s only psilocybin that’s illegal. A mushroom that contains psilocybin is illegal to possess the same way a jar that contains psilocybin is, but spores don’t have psilocybin.

To sell samples of the spores of various mushroom species for study is perfectly legitimate. And apparently, there is a vibrant community of people who just love to study the spores of psychoactive mushroom species. These enthusiasts must be very careful, of course, not to accidentally introduce the spores to a jar of sterilized, fully-hydrated grain, which might then—again, quite accidentally—be placed in a warm cabinet for several weeks and later mixed with bulk growth substrate and then…. Such accidents could result in the growth of mushrooms containing illegal psilocybin!

Spore-supply services usually pay lip-service, at least to some extent, to the fiction that their clientele are only interested in microscopy. It’s best to follow their lead when ordering or writing product reviews.

It’s also important to remember that some jurisdictions do have laws against possession of spores of psychoactive species. Usually, supply houses won’t sell to customers in those areas, but it is your responsibility to know what the laws in your area are.

Should you want to buy from spores for, you know, study, here’s a quick review of some of the top suppliers. 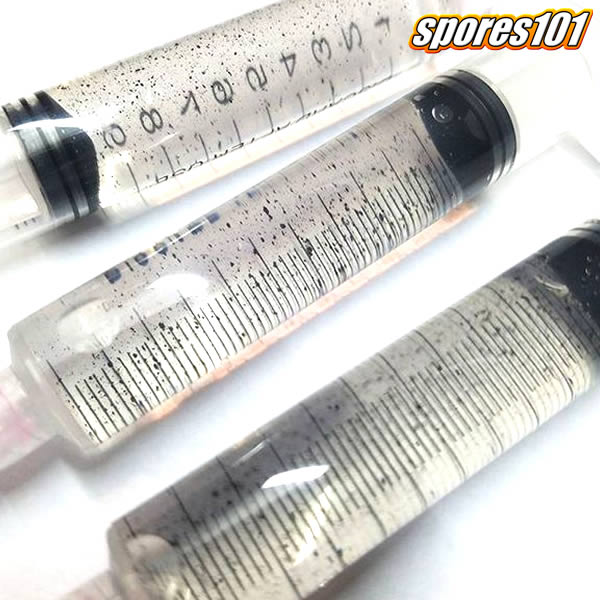 Spores101[i] does not talk about itself on its website—no charming history of the company, no inspiring statements of mission or philosophy, nothing. Just products and information about their products (these are the most important things, anyway). Their reputation for quality seems good, unfortunately, though there are unsatisfied customers as well[ii]. They have more than one distribution center, and it spite of that seem to have been able to maintain their quality even at scale.

Species sold: Spores101 only sells P. cubensis varieties—but there are a lot of them available, and the options can change over time. If you don’t see what you’re looking for now, you can always check back later. Other species are listed as available, but clicking on them redirects the customer to a partner website.

What do they sell? Spores101 sells spore syringes and spore prints, as well as various types of related equipment. Liquid culture syringes are available, but through a separate affiliate website. Note the liquid cultures of psilocybin species do contain psylocybin and thus do not occupy the same legal loopholes spores do.

Where do they ship? Spores101 ships worldwide, though customs regulations may apply.

Cons:  Their website is outdated and could use a refresh, for example they have separate sections for USA and Canadian customers.

Species sold: Mushrooms.com sells a wide variety of culinary and medicinal species, plus a couple of “magics,” including a good selection of P. cubensis strains.

Where do they ship? There is no limitation listed on the website; they appear to ship worldwide.

Pros: An amazing domain the exudes trust in an untrustworthy market. Their selection is impressive, and if the five-star reviews are honest, then their quality and customer service are good.

Cons: The possibility that the one-star reviews could be honest is worrisome. Plus, their website is hard to navigate, with some product categories buried one or two layers down in menu trees.

Spore Works[iv] does provide some information about itself, but not much; it was founded in October of 1998, and is committed to quality and to excellent customer service. Independent reviews[v] are typically quite positive, and since there are also a number of mid-range reviews (something somebody with an agenda is unlikely to provide), we are more confident that most of the reviews, including the very good ones, are honest.

Species Sold: Spore Works sells a great many medicinal and culinary species, as well as an excellent selection of psilocybin species of three genera (Psilocybin, Panaeolus, and Gymnopilus). There are multiple strains of P. cubensis included.

Where do they ship? Spore Works has “suspended” shipments to countries other than the United States, citing the difficulty of keeping up with regulations in recipient countries—it looks as though several orders got seized by Customs, causing unpleasantness the company wishes to avoid. Spore Works will also not ship spores to those American states that have laws against these products.

Pros: Reviews suggest solidly good quality and customer service. Bad reviews seem always to be about dead spores, but the company cannot and does not guarantee that spores won’t die if handled improperly during shipping or by the recipient. They do replace dead spores. The website is clear and easy to understand and navigate, plus their refusal to ship to places where the product would be illegal (rather than leaving it up to the customer to learn the law) suggests a reassuring professional seriousness.

Cons: No cons jumped out at us in our research so far. While we doubt the company is actually perfect, its imperfections currently elude us.

Spore Lab[vi] does not provide information about itself, besides a statement of its commitment to quality and service. Few independent reviews are available, but they are mostly positive and believable-looking[vii].

Species Sold: Spores Lab sells a variety of P. cubensis strains, as well as several other species in the Psilocybe and Panaeolus genera, and a variety of culinary and medicinal species.

What do they sell? Spores Lab sells “genetics.” It is not entirely clear whether this means spore syringes,  spore prints, or liquid cultures. The company also sells cultivation supplies, kits, and equipment, as well as some medicinal-type mushroom supplement capsules.

Where do they ship? Spores Lab only ships within Canada.

Pros: This company seems well-regarded, its customers happy with its service and its product quality. The website is easy to navigate.

Cons: Some of the “genetics” for psychoactive species are marked “tested for potency.” What does this mean? Does it mean tested for viability? If so, that’s fine, but none of the non-psychoactive species have such a note. Were these products tested for their psilocybin potency? How? Spores don’t contain psilocybin. Perhaps this lack of clarity is innocent, but it gives us an odd feeling.

Ralphsters[viii] does have a section of its website labeled “Our Story,” but it doesn’t tell a story, beyond stating that the company is over twenty years old. Instead, the page simply asserts the company’s commitment to high quality and discrete packaging. Based on information gleaned from independent customer reviews, the company seems to consist mostly of a Canadian man named Ralph (although the company split into Canadian and US branches).

Unfortunately, Ralph seems to have developed some sort of trouble—many reviews posted around 2012 or 2013 told the same story, customers who had ordered from him for years without trouble noticing slippage in both product quality and customer service[ix][x]. More recent reviews openly accuse him of scamming customers, taking money and never providing the product.

These accusations may not be fair. The Ralphsters site urges customers to provide a correct, valid address and contact information, explaining that many customer complaints involve people who did not do so and whose orders cannot therefore be filled. That is certainly plausible. And review sites are not scientific opinion polls—there is nothing to stop people with an agenda from posting, and it’s well-known that dissatisfied customers (no matter how few) are more vocal than satisfied ones (no matter how many). But there are mushroom-enthusiast groups that have cut ties with Ralph[xi][xii], lending credence to the negativity.

Species sold: Only P. cubensis is currently listed on the site, although according to reviews, other species have been offered in the past.

What do they sell? Ralphsters sells spore syringes and spore prints of many cubensis strains, plus some equipment. Various specials are also available—these are strains or groups of strains packaged together under clever names, which could be a fun way to get an introduction to something new.

Where do they ship? Prints ship worldwide. Syringes ship only within the US—Ralphsters WILL ship to states where spores are illegal to possess. It is up to the customer to decide whether to take the legal risk.

Pros: Ralphsters was one of the earliest spore suppliers and for many years had an excellent reputation for quality and selection. According to some reviewers, that legacy continues. The website is also easy to navigate and informative.

Cons: If even half the negative reviews are honest, this company not-infrequently fails to deliver anything at all. And because it is a cash-or-money-order-only business, there is no way to cancel a payment once it has been sent.

Reliable Spores[xiii] is a family business interested in helping to encourage the “study” of psychoactive mushrooms for the “good of Humanity.” To learn more about the company, it’s necessary to go to independent reviews—of which there are very few. Most of those available are glowing, however. Reliable Spores also has a strict policy of not selling to or answering emails from people who mention cultivation. The only negative review we were able to find complained that the spores had not germinated and the company hadn’t responded—Well, if the customer used the word “germinate” when contacting the company, of course it wouldn’t. That’s to protect customers as much as to protect Reliable Spores.

What do they sell? Reliable Spores sells both spore syringes and spore prints.

Where do they ship? Reliable Spores ships only within the US. It does ship to states where possession of spores is illegal. Or, at least there is no stated policy against doing so—the company decides whether to sell to customers “on a case-by-case basis,” suggesting that that perhaps state-of-residence maybe sometimes be a reason an order is declined.

Pros: This company has a reputation for quality and service. Its focus on security is also reassuring.

Cons: The selection is much smaller that at many similar sites.

The Magic Mushroom Shop is a British company with prices listed in Euros. No other information is available on the company’s website, nor are any independent reviews available.

Species Sold: The Magic Mushroom Shop sells spores for at least three species: Psilocybe cubensis, of course, plus Psilocybe galindoi and Psilocybe tampanensis (both of which produce psychoactive truffles), and Panaeolus cyanescens.

What do they sell? The Magic Mushroom Shop sells prints, syringes, and vials of spores, as well as grow kits, cultivation equipment and supplies, and the seeds of various psychoactive plants—and actual psychoactive truffles. Some of these products are not legal in the United States.

Where do they ship? The website does not indicate any limitations.

Pros & Cons: Is is actually not possible to list pros and cons without access to independent reviews.