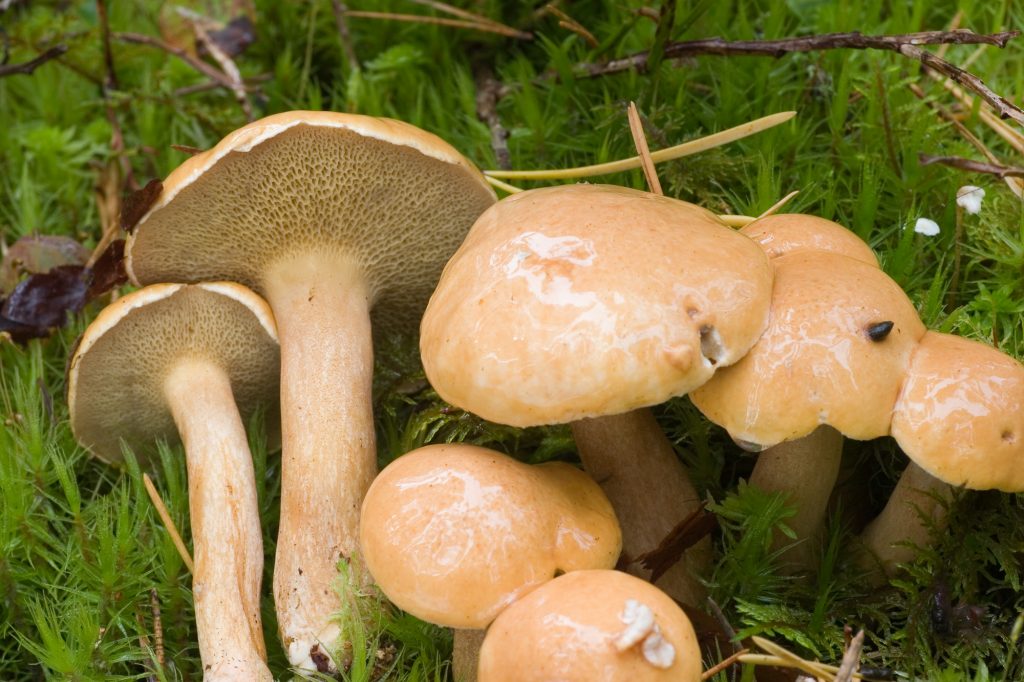 Suillus bovinus, also known as the Bovine Bolete or the Jersey Cow Mushroom, is a rather large, porous, pale clay-brown mushroom found in coniferous forests, often in a three-way relationship with pine trees and Rosy spike mushrooms.

This species was first described as “Boletus bovinus” in the second edition of Species Plantarum published in 1753 by Carl Linnaeus. Linnaeus derived the epithet “Bovinus”  from the Latin word for cattle “bos”. This derivation is thought to be based on a tale of medieval knights’ preference for the Yellow Knight Mushroom (Tricholoma equestre) and their renunciation of S. bovinus as “fit for only cattle drovers”. As with most mushrooms “Boletus bovinus” was reclassified in 1796 as “Suillus bovinus” by Henri François Anne de Roussel. The generic name “Suillus” is derived from the Latin word for swine “Sus” and is a reference to the pig-like greasy nature of this specie’s cap.

Over the last three centuries, several mycologists have also reclassified this species under various names or genera . As such, readers may come across it in older mycological texts under names such as Agaricus bovinus, Boletus aestivus, Boletus congoensis, Ixocomus bovinus, Mariaella bovina, and Viscipellis bovina.[i]

Cap: The cap of this species measures 3 to 10 centimeters in diameter. Young specimens have convex caps, however, with age caps become flattened. The margin of these caps can sometimes be wavy and irregular. The caps are somewhat variable in color, ranging from pale yellow to deep orange, but most often they are a light, clay-brown/pink color. Furthermore, the wavy edges are always paler than the center of the cap, and can even be white. The surface of the cap looks “greasy” and is slimy/ sticky to the touch.
Flesh: The flesh is soft and similar in coloration to the cap, either yellowish, whitish, or clay-colored. Mycological sources differ on whether the flesh of this species changes color when bruised or cut. Therefore, the flesh may sometimes but not always turn a slight pink color when cut or otherwise damaged.
Tubes and pores: Suillus bovinus does not have gills but rather a sponge-like polyporous undersurface with a layer of tubes that are not readily separable from the cap. The pores are arranged in two layers, a coarse, angular outer layer on top and a finer inner pore layer underneath. The tubes themselves are angular, more or less decurrent, olive-yellow in color, and measure up to 1 cm in length.
Stem: The stem of this species is mostly the same color as the cap. It measures 4 to 8 centimeters in height and approximately 0.5 to 0.8 cm in diameter, as such it is much thinner compared to other Boletes. The stem is mostly club shaped, but with age may become more parallel-sided. In contrast to other members of Suillaceae, it lacks a membranous ring. Lastly, the flesh of the stem on cross section is white and can sometimes have a pinkish coloration near its base.
Spores: The spores of this species are smooth, subfusiform, and measure 8-10 by 3-4 µm.
Spore Print: The spore print is olive-green or olive brown in color. They are held in groups of four by narrow, club-shaped basidia with four sterigmata. Basidia measure 22.4–33.4 by 5.8–8.0 μm.
Smell:  This species is said to have a mushroomy or fruity smell.
Flavor and Edibility: Suillus bovinus is considered edible, however, it is by no means a choice edible. Hence the medieval knights rejecting it as fit for only cattle herders. The fresh specimen is said to have a slightly sweet taste, but they should not be eaten. Instead, S. bovinus should be dried and then reconstituted prior to cooking. This is reported to improve its taste. Furthermore, the flesh of reconstituted S. bovinus turns purple.
Habitat: Suillus bovinus grows gregariously (which is unusual for a Bolete) on the edges of forests, and along woodland paths and small clearings in acidic, sandy or calcareous (chalky) soil. Ecologically, a rather unique three-way relationship is formed between this species, the Scots pine tree, and the Rosy Spike mushroom (Gomphidius roseus). An Ectomycorrhizal relationship exists between S. bovinus and pine trees, with these mushrooms usually found beneath them. And a parasitic relationship exists between the Rosy spike mushroom and S. Bovinus, with G. roseus never found growing in isolation.
Fruiting Season: S. bovinus fruits between August to November.
Range: Suillus bovinus is endemic to woodlands throughout all of Europe. It can also be found in Asia, Australia,  New Zealand, and South Africa. In North America, it is regarded as an “introduced” species through Scots pine trees. In the United States, it is mostly found in the Northeastern states such as North Carolina, New York, Pennsylvania, and Vermont.

This species is not easily confused with other species on account of the distinctive appearance of its clay-brown, sticky/slimy cap and polyporous undersurface.

Possible species of mushroom that may rarely be confused for S. bovinus include Suillus granulatus, Suillus variegatus, and Suillus Grevillei. S. granulatus has milky droplets beneath its cap and a single layer of pores. S. variegatus has a rather granular cap surface and darker, smaller pores that are not decurrent.

Fortunately, all these species are considered edible therefore a mixup between them should not pose a significant risk.

Lastly, in North America one may come across a rare subtype with bluing flesh subtype termed S. bovinus var. viridocaerulescens.

When out hunting for S. bovinus one should keep one safety concern in mind. Several species of fly use the fruiting body of this mushroom to lay their eggs and rear their larva. Therefore mature fruiting bodies may be infested with fly maggots and other bugs.