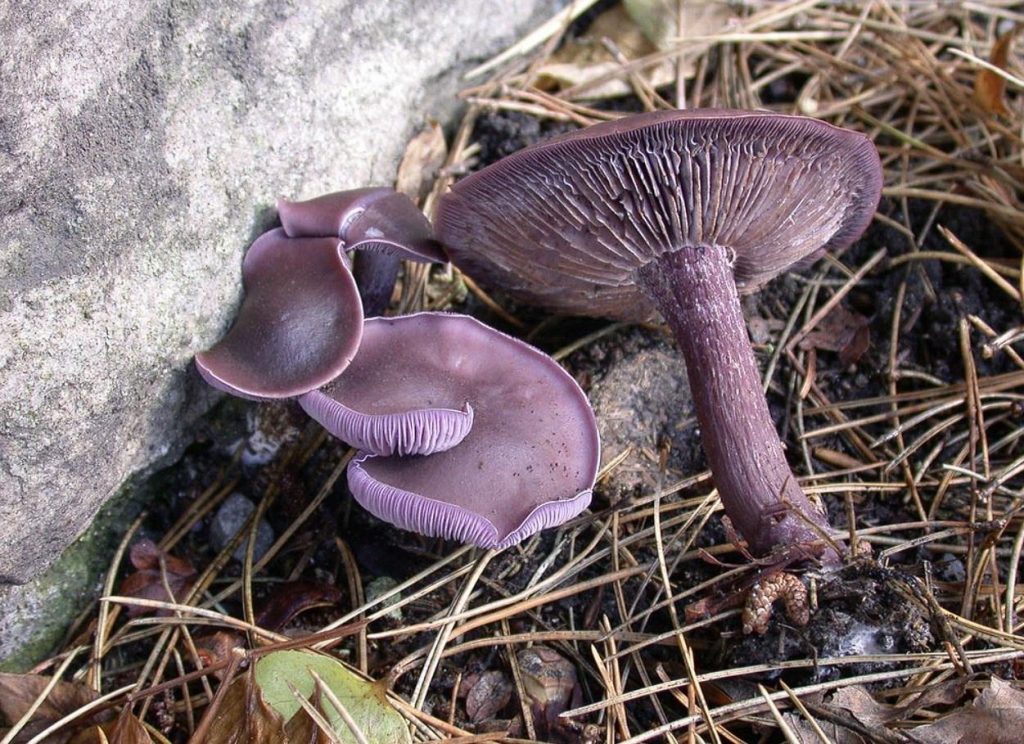 Lepista sordida, commonly known as the Sordid or The Dirty Blewit, is an edible and medicinal mushroom from the family of Tricholomataceae.  This medium-sized mushroom characterized by its striking violet-brown colored cap and a pinkish spore print can be found in almost all corners of the world. [i]

The taxonomy of this species is also very interesting and possibly on the verge of undergoing revision. It was first described by the notable Swedish mycologist Elias Magnus Fries in 1821. Fries classified this species under the genus Agaricus, and gave it the epithet “sordidus”, referring to “dirty” shades of brown that are frequently found on the top of its cap. It was not until 1949 that the German mycologist Rolf Singer reclassified this species under its currently-accepted scientific name. However, due to new molecular phylogenic studies, it appears that its current name and taxonomic placement may not be the most appropriate. Recent evidence suggests that the genus of Lepista is polyphyletic, meaning that members of this group have more than one common evolutionary ancestor and therefore cannot be placed within the same taxon. Currently, it is believed that this genus is formed from two clades. The first core clade contains the type species of Lepista and its close relatives. And the second clade contains remaining Lepista species such as L. sordida, L. nuda, as well as species of Clitocybe. Studies have shown that Lepista species from the second group are not all that phylogenetically closely related to the core group of Lepista, but are instead more closely related to species of Clitocybe. As such, it would not be surprising to see the generic placement of this species under the genus of Clitocybe in the near future.  [ii]

Furthermore, L. sordida has numerous varieties and forms which are all considered synonymous. In addition to this, this species has also been known by at least 15 synonyms in various mycological texts. The names of these “varieties” and other synonymous names are offered below: [iii]

Cap: The cap of this species measures 1.5 to 10 cm in diameter, and has very thin flesh. In young specimens, the cap is convex with a central umbo. With age, the cap flattens and sometimes develops a central depression. The margins of mature specimens are slightly in-rolled, wavy, and striate when moist. The color of the cap also changes with age. While young, the cap is light violet/lilac, but with age, the cap starts turning light brown from the center outward. The surface of the cap is dry, dull, and glabrous. The surface never turns sticky even in moist weather.
Flesh: The flesh of this mushroom is very thin. It is concolorous (lilac) to the cap and fades to a brown color with age.
Gills: This gills of L. sordida are thick, broad, and crowded. They are either sinuate or  emarginate. The gills are also a light grayish lilac color in young specimens and with age fade to a buff color.
Stem: The stem of this species measures 2 to 6 centimeters long and 4 to 10 millimeters in diameter. It is roughly cylindrical, fibrous, and solid to semi-hollow. The surface of the stem is covered in fine down/fibrils, especially towards the base. In color, it is the same lilac color as the cap and also fades to a brown color with age. The stem lacks an annulus/ring.
Spore: The spores of this species measure 5.7–7.9 by 2.8–4.0 µm. They are ellipsoidal, hyaline, smooth, colorless, and thin-walled. Spores are held in pairs of 2 or four by narrow, clavate basidia that measure 13–16 by 4–6 µm.
Spore Print: The spore print of this species is creamy white to pale pink.
Flavor and Edibility: Lepista sordida is fully edible when cooked thoroughly and is reported to have a mild, almost indistinct sweet, mushroomy flavor.
Smell: Lepista sordida has a pleasant, perfumed, or floral smell.
Habitat: This species is saprotrophic growing solitarily or in small clusters in mixed woodlands and gardens, usually in areas with decomposing leaf litter and heaps of compost piles. Furthermore, clusters of species are known to grow in peripherally expanding circular rings known as “fairy rings”.
Range: The distribution of L. sordida is broad. Specimens of this species have been collected in Europe, Asia, North America, Africa, and Australia.
Fruiting Season: The fruiting season of this mushroom makes it rather unique. The cap and stem of L. sordida can withstand repeated cycles of freezing and thawing. As such, they can be found fruiting well into late November and the first half of December, long after most other mushrooms have vanished.

Due to its violet cap color and very late fruiting season lasting well into winter, L. sordida is relatively easy to identify and hard to confuse with other species.

However, the violet color of the cap can make it hard to tell this species apart from other violet-colored species earlier on in the fruiting season. Lepista nuda (Wood Blewit) and Cortinarius violaceus are two examples of violet-capped species that need to be differentiated from L. sordida. Lepista nuda and Lepista sordida can be quite hard to tell apart as they share a common habitat, but generally speaking, L. sordida is usually more slender and has a greater tendency to grow in clusters; while L. nuda is larger with a more robust stem and thicker flesh.

Cortinarius violaceus can be differentiated from L. sordida on the basis of having more robust stems and rust brown spores in contrast to the colorless spores of L. sordida.

Another possible species that may be confused for L. sordida is Mycena rosea. However, this species can be readily differentiated by their white gills and their radish-like odor.

L. sordida has been used in traditional Chinese medicine for a long time for its purported anti-tumor, antioxidant, anti-aging, and immunomodulatory properties. Research from the last two or three decades has shown that these claims may have some basis. For example, an older study from the department of biochemistry at the Technical University of Kaiserslautern showed that two naturally occurring diterpenoids, namely lepistal and lepistol, induced the differentiation of cells in human leukemia. Other studies have also shown that various bioactive compounds isolated from this species have antimicrobial, cytotoxic, and antioxidant properties. However, the exact mechanism of how these L. sordida-derived compounds work or whether they can be used in humans as potential natural anti-cancers and anti-aging agents remains under question.

Lepista sordida is completely safe to consume, however only when cooked through completely. Fresh specimens are known to cause gastrointestinal upset in susceptible individuals.