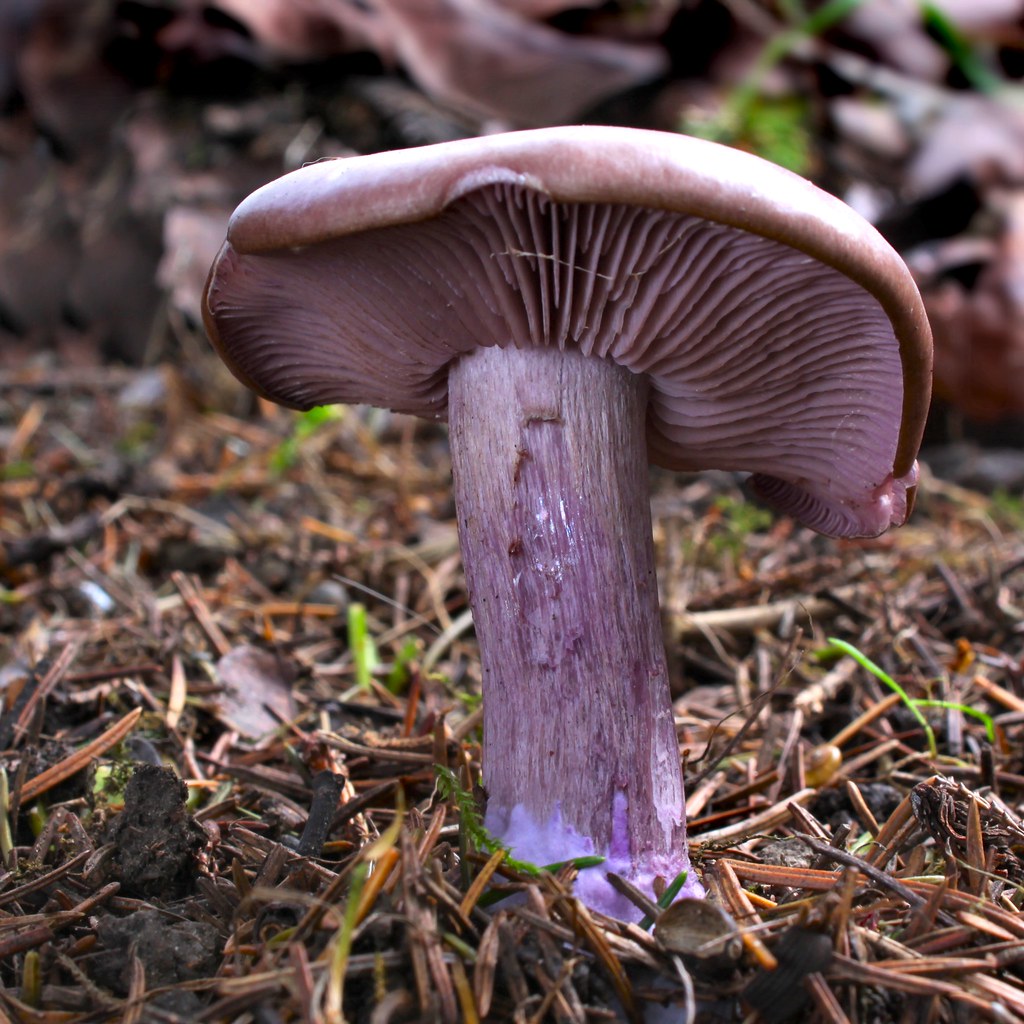 The wood blewet is one of two mushrooms often simply called “blewit” (the other is the closely-related field blewit,). The two look very much alike, but fortunately are both edible. Other look-alikes, however, are not; blewits are not considered “beginner” mushrooms for foragers[i]. Adding to the confusion, some authorities use a different scientific name, Lepista nuda, to refer to the same species.

The primary health benefit of the blewit is nutritional, but it is thought by some to have medicinal potential as well. It is traditionally used both to prevent symptoms of thiamine deficiency(beriberi) and also in wound care[ii].

Gills:  Lavender, lilac, buff, pinkish, or brownish. Attached to the stem, sometimes running partway down it. In other cases, a short notch next to the stem can make the gills seem unconnected.

Taste:  Mild, sometimes slightly bitter, but variable. Can be distinctive but difficult to describe; “blewit-flavored.”

Wood blewits[iii], when young, look as though they should be easy to recognize, as they are typically entirely blue or violet. The problem is that the color fades with age (some individuals are brown or buff even when young) and the shape also changes somewhat. They grow throughout North America and fruit in the late summer and early autumn. In the warmer parts of the species’ range, they can fruit though the winter. Fruiting bodies may be solitary, in rings, or in irregular groups of varying densities. The mushrooms may appear near the base of the tree, but that is only because the fungus feeds on rotting organic matter, and piles of leaves sometimes accumulate around trees. Any pile of debris may support this species, which can actually feed on bacteria directly; fungal hyphae attack, kill, and suck dry individual bacterial cells.

Animal studies suggest that extracts from blewit may be useful as part of immunotherapy treatments for certain cancers[iv]. Extracts of the mushroom also protected mice who had been experimentally fed high-fat diets from changes associated with Type II diabetes[v]. Fungal extracts are also effective against certain microorganisms, including several kinds of bacteria[vi] and have antioxidant potential[vii]. But the clearest benefit of blewits is simply that they are an extremely healthy food, having zero cholesterol and being low in fat and calories and high in certain micronutrients, notably thiamine.

Because no medicinal use (besides the nutritional value) has yet been confirmed for blewit, dosage can’t be estimated. But it can be eaten freely as part of a healthy diet.

Blewits themselves are safe to eat, though some individuals may have hyper-sentitivities or allergies. As with many other mushroom, it is important not to eat them raw—stomach upset could result. The main warning is for foragers; some of blewit’s look-alikes are dangerous, so proper identification is important.