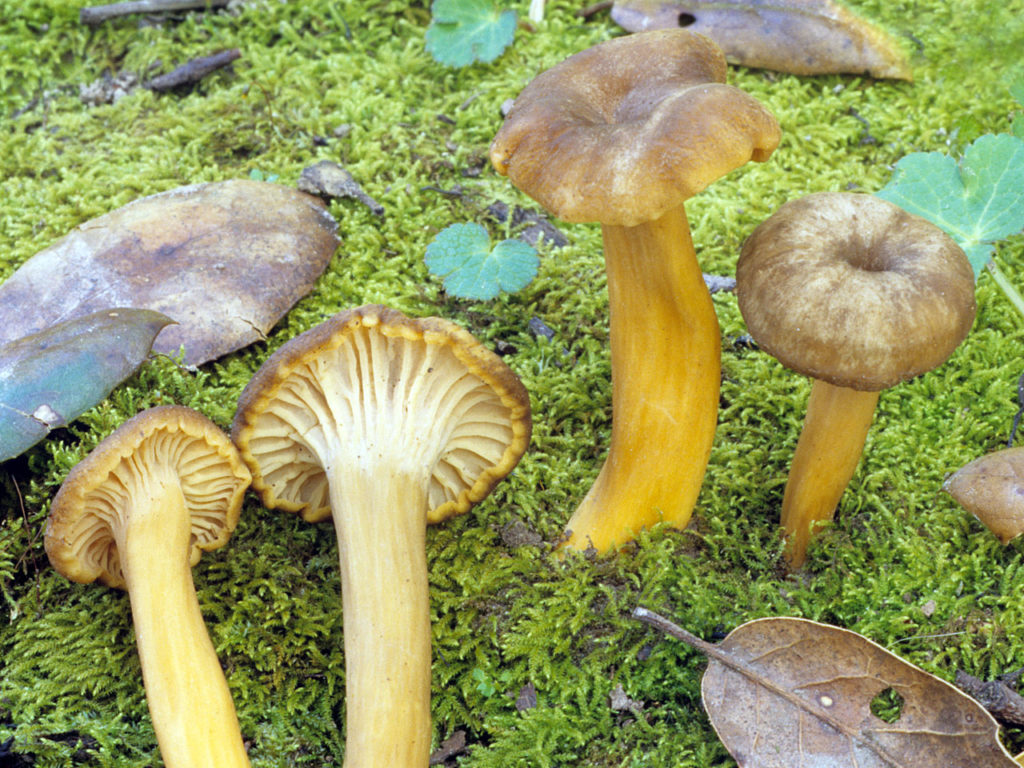 Craterellus tubaeformis (C. tubaeformis) is a fairly common forest mushroom that grows from small to medium size. They are generally found budding in decaying, coarse, woody debris, lowland, wet lands, and moss-covered logs in the mountainous regions of North America and Europe[i]. These places are abundant with conifers, including pines, spruces, and firs. From here, C. tubaeformis may grow solitarily or in loose clusters, or occasionally, in large numbers too. Presently, the fungus is harvested and distributed in Asia, such as India[ii] and Thailand[iii], as well as Africa.

The cap of C. tubaeformis is naturally predominantly yellow with significant shades of brown, earning its other name, yellowfoot or yellowlegs. More names for this mushroom include winter mushroom, Winter Chanterelle, Funnel Chanterelle, and Trumpet Chanterelle.

Aside from the physical differences, C. tubaeformis is also often confused with other mushrooms in the context of nomenclature. Between C. tubaeformis and C. infundibuliformis, the distinction is still unclear. Some studies consider the two species as distinct and separate, while modern researches treat them as one, with syntax as only varying factor. Due to the relevance of modern researches, any reference regarding Cr. infundibuliformis is now pointed to C. tubaeformis.i

Mostly available for harvest in mid-winter through mid-spring or September to January, there are many ways to prepare C. tubaeformis as food. When seasons change and availability of mushroom is scarce, C. tubaeformis can be preserved, dried, or pickled. After foraging, the mushrooms are carefully cleaned with water. The dust and soil in the caps and the gills are cleaned using a dry and soft brush. It is to be noted that soaking the mushroom or leaving it wet for a certain period of time may cause sogginess.

One can prepare C. tubaeformis through sautéing, frying, and boiling. Because of its taste, it is known to be an adaptable and versatile ingredient that can complement a lot of dishes like pasta stuffing, mushroom soup, and pizza. It is also a great addition to flavor and texture in a variety of vegetable dishes. When cooked, C. tubaeformis emits no distinct taste except for a generally pleasant and earthy flavor. It does not give off a distinct aromatic odor.

In terms of storage, unwashed C. tubaeformis may be kept in a paper bag inside the refrigerator for less than a week.

As a member of the Craterellus genus, C. tubaeformis is packed with most essential nutrients and minerals needed by the body. One cup of C. tubaeformis has 1.87 mg of iron, 273 mg of potassium, 31 mg of phosphorous, and only 0.63 g of sugar. Other vitamins and minerals found in this mushroom are vitamins B, B12[vi], D, fiber, and copper. Consumption of C. tubaeformis can promote overall physical health, specifically the following:

Inflammation in the human body is a series of interactions that may be due as a response to trauma or injury. Polysaccharides extracted from C. tubaeformis are found to have anti-inflammatory properties, thereby boosting the immune system once consumed[vii].

According to a study, Vitamin D2 found in wild C. tubaeformis is more significant compared to button mushrooms from stores[viii]. It is an important vitamin D source for people who are allergic to fish or who are following certain diets, such as vegetarianism[ix] and veganism. In the long run, taking C. tubaeformis on a daily basis can significantly lower the risk of osteoporosis in the older generation.

C. tubaeformis is a great source of fiber. According to the results of McRae’s (2018) meta-analysis on fiber intake and diabetes, daily fiber intake significantly decreases risk for type 2 diabetes, the chronic medical condition brought about by increased sugar accumulation on bloodstream due to unhealthy lifestyle[x].

C. tubaeformis have significant traces of vitamin B and B12[xi]. Such vitamins have a direct positive effect in enhancing brain function. By boosting red blood cells that carry oxygen to the brain, these vitamins cause the central nervous system to work faster, thus, significantly alerts the decision-making process, and improves the overall disposition of the person.

Chanterelle mushrooms are known for their ability to accumulate heavy metals that are usually known to be toxic to the human body when ingested. These include cadmium, lead, and mercury. However, these metals may only add up to a certain amount that is within tolerance levels, and with proper preparation, they may further decrease in the cooking process.

During harvesting, C. tubaeformis forms cibaric acid and 10-hydroxy-8-decenoic acid as its natural response to injury. Cibaric acid is a relatively new fatty acid compound that is discovered in the 1990’s. By then, cibaric acid was subjected to isolation and analysis. Because it is still a premature discovery, its biological activity, insect-related activity, and/or effect on mushroom consumers has not been fully explored[xiv].

While it is considered to be one of the harmless and most common edible mushrooms, consuming large quantities of it without chewing them properly might cause digestive problems and intestinal complications. Moreover, there are rare cases observed regarding taking C. tubaeformis with alcohol that resulted to negative reactions from the body[xv]. In a study done on fungal allergy and pathogenicity, results show that five percent of the subjects with respiratory allergies are sensitive to C. tubaeformis’ spores[xvi].

It should be emphasized that the aforementioned medicinal and nutritional health benefits of C. tubaeformis still hold true when taken in modicum amount for a certain period of time. There may or may not be potential danger when taken in excess and no effect when taken in minuscule amounts; what is only established by existing literature is that C. tubaeformis is an edible mushroom.

With the recency of C. tubaeformis’ re-classification, there are limited studies regarding its comprehensive effect, both positive and negative, whether medicinal or nutritional, on the human body. If one should plan to consume C. tubaeformis as an alternative medicine, as an additional source of vitamins, or as a new part of one’s diet, it is recommended to consult a qualified practitioner for a more inclusive scientific opinion. Even then, individual differences should be taken into account, and what proves to be effective to the general population may not prove the same for a certain individual.