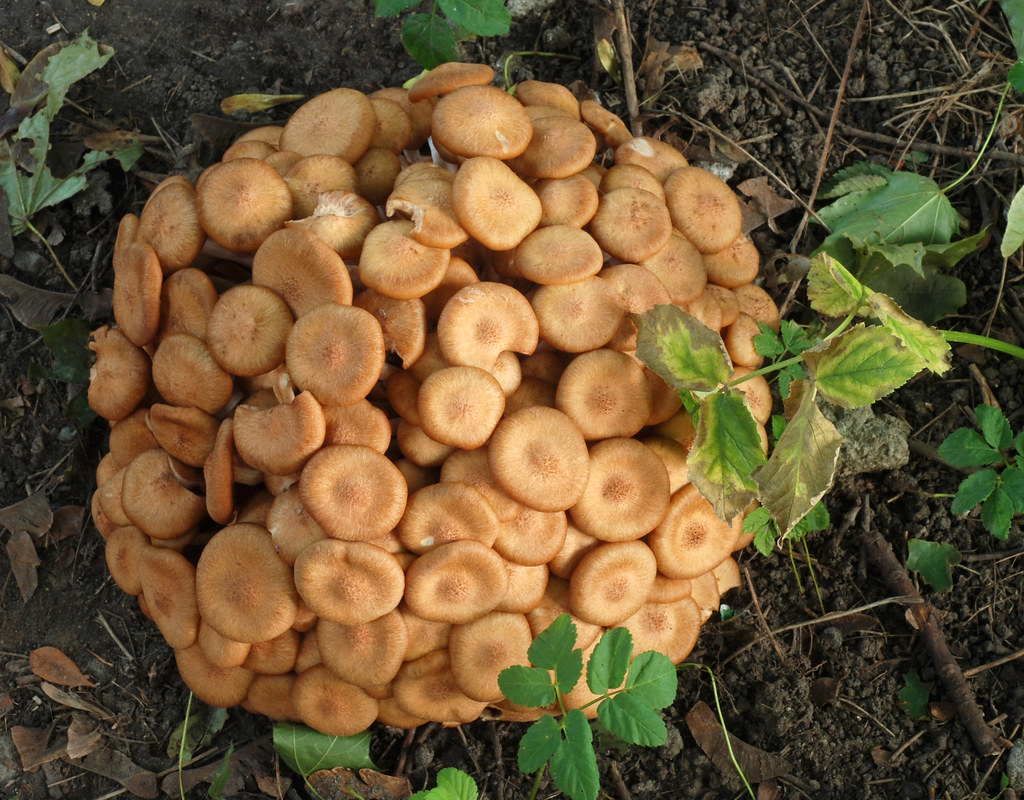 The Ringless Honey Mushroom[i] is a small brown mushroom that feeds on living or dead tree roots and typically fruits in large clusters in which the stems of the mushrooms may be fused at their bases. Its season is late summer to early fall. They grow widely in North America and Europe, and perhaps elsewhere. Like other honey mushroom fungi, individuals of this species—meaning the underground organism that gives rise to the mushrooms—can get very large thanks to black, root-like structures that make transfer of nutrients through the fungal body more efficient. Patches of mushrooms dozens of yards apart may actually belong to the same individual. These root-like structures are seldom visible to collectors, however.

Honey mushrooms[ii] as a group may be characterized as either choice edibles or mildly toxic, depending on the authority consulted, since while many people do eat them with enjoyment, it’s not uncommon for some of those people to suffer gastrointestinal upset afterwards. Cooking reduces the chance of a bad reaction. The ringless honey is somewhat less sought-after than some of its relatives as its taste is not quite as good.

Cap: Brownish or sometimes yellowish, about two inches across, becoming flat or slightly dented in the middle with age. There are dark scales on the surface, especially when young. The edge may be slightly lined. The flesh is whitish to tan and does not change color when bruised or sliced.

Gills: Pale, pinkish white, but can become pinkish or brownish, especially if bruised. Most of the gills extend partway down the top of the stem, though there are short, partial gills among them, too.

Stem: Up to about three inches long, thin and tapering to the bottom, smooth and pale near the top, becoming darker and slightly hairy below.

Smell: Not distinctive for identification purposes.

Taste: Can either be bitter or not distinctive for identification purposes.

Edibility: Edible but with caution.

Habitat: Eats living or dead tree roots, especially those of oaks or maples. May appear to fruit directly from the ground, if the root is underground and far from its tree or stump.

As the name suggests, there is no ring or suggestion of a ring on the stem, nor does it ever grow on the trunk of a tree, as some of its relatives do.

Mushroom hunters say the ringless honey mushroom is the easiest honey mushroom to identify, but that is only because it is a very atypical honey. Beginners who cannot identify the specimen as a member of the honey group (the Armillarias) to begin with do not find the ringless easy to identify at all—and young specimens vaguely resemble the Deadly Galerina.

The very large, rapidly-growing clusters of this mushroom are a good hint at its identity, and at least make the fruiting bodies difficult to overlook.

Although the ringless honey mushroom was not traditionally used for medicinal purposes, it does contain a substance, α-(1→6)-D-glucan, known to have anti-cancer properties[iii]. An extract of the fungus has also been shown—in in vitro testing—to be effective against several types of bacteria known to cause disease in humans[iv]. The ringless honey mushroom is also one of several mushroom species found to have antioxidant effects, and thus may have potential not simply in medicine but also as a source of food additives[v]. To be clear, the species is not currently used in medicine, and is not a popular health supplement. It simply has potential.

A close relative of the ringless honey mushroom, Armillaria mellea, has been more thoroughly researched and its potential medicinal benefits are much better-known. Although even closely-related species can be very different from each other biochemically, A. mellea does suggest possibilities for the ringless honey.

Antioxidant Effects of A. mellea

Honey mushroom (A. mellia) is traditionally used in China for a number of complaints an in-vitro study examined the chemical constituents of the mushroom and identified several that have anti-oxidant and anti-edema effects[vii]. Another similar study identified both anti-oxidant substances and substances capable of lowering blood sugar[viii].

Anti-Cancer Properties of A. mellea

A series of in vitro tests showed than an extract of honey mushroom killed both human lymphoma cells and two different kinds of human liver cancer cells[ix]. Of course, for a substance to kill cancer in a dish is no proof that it can fight cancer in a person (without, for example, killing the patient’s other cells), but it does indicate a worthwhile avenue of research.

Neurological Health and A. mellea

A study involving mice who had been experimentally given a degenerative condition similar to Alzheimer’s Disease found that an extract of honey mushroom both improved the subjects’ performance on mazes and other tests and reduced characteristic signs of degeneration in their brains[x].

Antibiotic Properties of A. mellea

At least four antibiotic and anti-fungal substances were originally isolated from honey mushroom tissue[xi]. Whether the whole mushroom can deliver a therapeutic dose of any of the four when eaten seems unclear, however.

Because the ringless honey mushroom is not currently used in medicine, the question of dosage does not apply.

Side effects in a specifically medicinal context are unknown, since the ringless honey is not generally used as medicine—the answer will likely depend on whether the whole mushroom is used or some kind of extract. Ringless honey mushroom is eaten, but, like other honey mushrooms, it must be eaten with caution if at all, since gastrointestinal upset is not unusual among people who partake. Proper cooking reduces, but does not necessarily eliminate, the chance of a bad reaction.

And the standard warnings for all mushrooms still apply; it’s important to be sure of the identity of the mushroom, because of the existence of toxic look-alikes, and persons who have never eaten ringless honey mushroom before should exercise moderation. With any food, allergies or sensitivities are possible, and it’s best to find out with a small dose.